The Downside of Separating “Good” Undocumented Immigrants from “Bad” Criminals 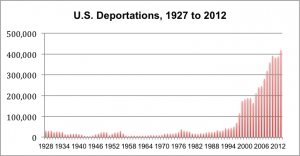 In recent decades, the United States has seen a spectacular rise in deportations, with local police forces authorized by the federal government to identify undocumented immigrants for summary removal. More than 11 million undocumented people across the country – including up to one in ten adult workers in the state of California – faced this threat in their daily lives.

To assuage the human costs, President Barack Obama outlined a plan in November 2014 to provide temporary protection to many undocumented migrants. Building on his earlier efforts to set priorities, the President specified that officials would henceforth seek to deport “felons, not families,” “criminals, not children,” “gang members, not a mom who’s working hard to provide for her kids.” In short, under the new policy, various kinds of immigrants deemed good would be protected from deportation. Well-intentioned city leaders, bureaucrats, and police would need to sort out the good immigrants from those vilified as criminals.

The “Good Immigrant” Solution in Practice

A growing chorus of experts argues that U.S. deportation policies in the 2000s have had many harmful effects. After September 11, 2001, most undocumented migrants came to be regarded as criminals and local police got more involved in immigration control. With more than 400,000 people deported each year, families have lived with the daily threat of captures and removals of adults doing jobs or errands. Many have hesitated to seek out social services, report crimes to the police, or even leave their homes. Along with documented family members and friends, undocumented immigrants have become increasingly socially isolated and subject to labor abuses – turning them into what some scholars call an underclass.

In relatively immigrant friendly cities, states, and institutions, authorities have tried to ease omnipresent deportation threats by redefining many undocumented migrants as “good” residents to be left alone while deportation efforts focus on criminals. My research among undocumented groups in Southern California compares how migrants have fared in the city of Los Angeles, where such divisions occur, versus how they have fared in Escondido, where all migrants have been treated as illegitimate. I discovered that when immigrants believed the police were making distinctions, they saw deportation and public services as conditional punishments versus rewards. In the words of “Maria,” a 36-year-old garment worker who had been living in the United States for about 15 years, “as long as we [undocumented migrants] follow the law, stay under the speed limit, do the steps they ask for, not wander around here and there, not drink, not do drugs – I say that as long as one is doing what the law asks, paying your insurance, paying your tickets, then everything is OK. But if you go around messing here, messing there, or not paying your tickets, then [it’s not].” As this quote suggests, most of the migrants I interviewed in LA believed that they needed to go beyond just obeying the law to display deference, stoicism at work, and self-sufficiency.Since 9/11, undocumented immigrants have become increasingly socially isolated and subject to labor abuses – turning them into what some scholars call an underclass.

Fears were indeed reduced for many Los Angeles migrants. To the extent that they associated deportation with criminal conviction, they were able to move about their jobs and cities and access public services. In contrast, respondents in Escondido, where authorities did not try to treat non-criminals differently, were often unwilling to report domestic violence or labor abuses to the police. More than two-thirds of Escondido’s undocumented migrants felt afraid to go about their daily lives, while this was true for only one in ten in Los Angeles, where migrants were more willing to go to the police or contact the local labor commissioner.

Logically, one might assume alleviating fears for undocumented migrants would open the door for them to become civically active. In practice, however, many adhered to a “good immigrant” ethic well beyond simply following the law, and they took pride in being stoic even when they faced abuses at work. For example, “Juan,” a 55-year-old construction worker, explained why he held back from demonstrations on behalf of immigrant rights. “Why am I going to go make a lot of noise where it’s not my home? It’s not my city. I’ll tell you again. I’m an immigrant, and I don’t forget that. … As an immigrant I start thinking, and I ask myself, ‘What am I contributing to this nation?’ What am I contributing? Well, being a good worker, paying my taxes, not owing the government anything, and obeying – respecting the laws. That’s all for me.”Most of the migrants I interviewed in LA believed they needed to go beyond just obeying the law to display deference, stoicism at work, and self-sufficiency if they were to be viewed as “good.”

The idea that deportation was conditional on behavior also encouraged respondents to believe deportation was the fault of those removed. At times, people even suggested that deporting “bad” immigrants was fair. According to “Maria” (whom I also quoted earlier), if the police “see people drunk, or drugged, if they see them making a mess and a half, then let them take them [out of the country] as they should. That doesn’t bother me.” In short, when deportation comes to be seen as due to the misbehavior of those who are removed, then authorities are not blamed, which further discourages protests against the deportation system as a whole.

Protection from deportation helps alleviate fear – as well as psychological trauma, social isolation, and exclusion from services. Yet as long as protection seems conditional on quiet and deferential personal conduct, any approach that divides undocumented migrants into good versus bad categories tends to reinforce secondary status for all of them. Current presidential policies and Congressional bills are premised on continuing – indeed reinforcing – the good versus bad distinctions among undocumented migrants. As my work shows, this approach is bound to have unintended marginalizing implications even for migrants classified as legitimate residents. Deportation relief is a first step. But more substantive reform requires doing away with the second-class “criminal migrant” category of people subject to summary deportation, and instead treating all migrants as worthy of universal rights and protections. That uniform approach is the only way to fully integrate migrants into American communities.

This brief was prepared for the Scholars Strategy Network by Abigail Andrews, UCSD. Andrews is a sociologist who studies globalization, migration, gender, and politics.

"Most of the migrants I interviewed in LA believed they needed to go beyond just obeying the law to display deference, stoicism at work, and self-sufficiency if they were to be viewed as “good.”"

They had to act American? The horror.