Recently my 84 year-old father told me that he has vivid memories of hearing the news of Martin Luther King, Jr.’s assassination, even though it was 52 years ago. He remembers where he was (the White House Inn in downtown Charlotte, NC), what he was doing (finishing a late dinner with his White boss), and his initial reaction (asking the boss to go check on my mother, who was eight months pregnant with me while at home three hours away in Raleigh, NC; Dad thought that it would be dangerous for a White man to be in the area that was drawing a large crowd of angry African Americans). I frequently speak with my aunt (Dad’s sister), and the next time we chat I will ask her about her activities that day. I’m sure that she’ll also have strong memories of April 4, 1968, as MLK’s assassination was a formative event for members of her “Greatest Generation,” especially if they are African American.

May 25, 2020 may turn out to be another epochal day in the histories of Minneapolis, locally, and the United States of America, nationally. Indeed, the murder of George Floyd by a Minneapolis police officer and the subsequent global protests about police brutality and other injustices faced by Black people in the U.S. and other countries may lead to significant changes in race relations in the U.S. I wish that I had a time machine and could travel 20 years into the future to see if the summer of 2020 launched lasting cultural and policy changes.

In the meantime, I would like to thank all of the contributors to the Wonderful/Wretched Memories of Racial Dynamics in the Twin Cities, Minnesota special feature. To [in order of essay publication] Darren Wheelock, Marcia Williams, Rachel Raimist, Catherine Ceniza Choy, Richard Lee, Jerry and Sarah Shannon, Garrick Percival, Wendy Thompson Taiwo, Danielle Lavin-Loucks, Özlem Ersin, Thomas X. Sarmiento, Jocelyn Gutzman, Rodolfo Aguilar, Donna Gabacchia, Mario Alberto Obando, Jasmine Mitchell, Neeraj Rajasekar, and Anna DalCortivo: many thanks for educating us about the history and culture of the place at the epicenter of the most recent conflagration in the long history of racial discord in the United States. 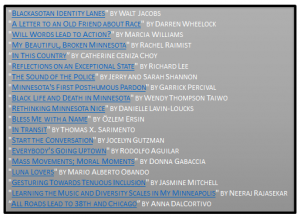 A few months before the 2016 US presidential elections, Christopher S. Parker penned the article “Do Trump’s Racist Appeals Have a Silver Lining?” The subtitle: “Donald Trump’s undisguised bigotry has alienated vast blocs of voters, but at least it makes racism in America impossible to deny.” Parker concluded the article with a note about the potential positives of Trump’s rise to power:

In short, counter-intuitive as it may seem, Trump’s candidacy may be a good thing for the country. Ultimately, it may go a long way toward healing the racial divisions that have crippled this nation from its founding. With the recognition of the depth of racism in America should come support for policies designed to at least mitigate, if not eliminate, the effects of discrimination. This is a net good. The discerning reader, however, will note that this analysis refers only to Trump’s candidacy-not to a Trump presidency. The former, we’ll likely weather. The latter would likely mean the end of America as we know it. But that’s a story for another day.

Four years later Washington Post columnist Dana Millbank revisited Parker’s article with the July 3, 2020 column, “A massive repudiation of Trump’s racist politics is building.” As Parker predicted, the America many people know in 2020 is not the same as the America they perceived in 2016.  Millbank informs us that Parker now thinks that a backlash Trump has provoked among Whites, Blacks, and other people of color could lead to a second Reconstruction. “I know it sounds crazy, especially coming from a Black man,” Millbank quotes Parker, but “I think Trump actually is one of the best things that’s happened in this country.”

I don’t think I can go as far as saying that the current occupant of the White House is one of the best things in United States history, but perhaps the many individual and group protests about our currently wretched state of affairs will eventually be regarded as kicking off a more wonderful future. As we have seen in the essays in the Wonderful/Wretched Memories of Racial Dynamics in the Twin Cities, Minnesota series, racial identities and racialized interactions are messy and fraught with inequities, but there are also opportunities to build a more democratic and just future. In the year 2040, perhaps, we’ll look back 20 years to May 25, 2020 as a significant turning point not only in Black people’s efforts to obtain social justice, but it may also have been the start of improved life outcomes for other people of color too. Let’s hope so.

I subscribe to “The Atlantic Daily” newsletter from The Atlantic magazine. Today’s edition arrived with a link to a new essay by Ibram X. Kendi, “Is This the Beginning of the End of American Racism?” The arguments in this essay mirror those of Christopher S. Parker’s “Do Trump’s Racist Appeals Have a Silver Lining?” Kendi notes, “[Trump] has held up a mirror to American society, and it has reflected back a grotesque image that many people had until now refused to see: an image not just of the racism still coursing through the country, but also of the reflex to deny that reality. Though it was hardly his intention, no president has caused more Americans to stop denying the existence of racism than Donald Trump.” Kendi muses further: “And just as the 1850s paved the way for the revolution against slavery, Trump’s presidency has paved the way for a revolution against racism.” In the essay’s concluding section, Kendi states that Americans can take one of two paths:

One path forward leads to a mere restoration. Barack Obama’s vice president unseats Trump, removing the bad apple from the barrel. With Trump dispatched, the nation believes it is again headed in the right direction. On this path, Americans consider racism to be a significant problem. But they deny the true gravity of the problem and the need for drastic action.

Or Americans can realize that they are at a point of no return. No returning to the bad old habit of denial. No returning to cynicism. No returning to normal—the normal in which racist policies, defended by racist ideas, lead to racial inequities. On this path, Trump’s denialism has permanently changed the way Americans view themselves. The Trump effect is real, and lasting. The reckoning we have witnessed this spring and summer at public demonstrations transforms into a reckoning in legislatures, C-suites, university admissions offices.

Which path will we take?