“Three white college students file racial discrimination complaint against professor over lesson on structural racism” The Salon headline from yesterday reads like my personal nightmare. In fact, Shannon Gibney’s account of what happened in her classroom reads like what I can only guess is the personal nightmare of any educator who teaches their students to critically think about hegemonic social power. 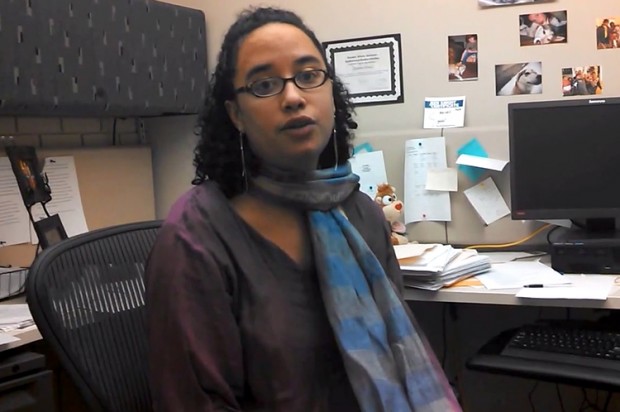 Gibney, a professor at Minneapolis Community and Technical College, started a discussion on structural racism in her Intro to Mass Communications class when multiple white students complained, “Why do we have to talk about this in every class?”. Gibney gives her first hand report of what happened next in an interview below:

“You guys are taking it personally. This is not a personal attack. We’re not talking about all white people- you white people in general. We’re talking about whiteness as a system of oppression.” I’ve said almost that exact same thing to my own students. And yet I know that some of my students still do take it personally. I’ve experienced first hand students stubbornly clinging to an individual-centered understanding of the world despite my attempts to open their eyes to the social structures that all individuals operate within.

In fact, as I listened to Gibney I kept thinking, I’ve said the exact same things. I’ve been in situations like that before. Oh my god, that could be me. But… to be honest, it couldn’t.

My White Male Privilege in The Classroom

Do a Google Image search for the words college professor (or just click here) and what do you see. A lot of faces that look a lot like mine. When I walk into the room, I’m willing to bet, no one thinks, “oh god. A white guy, I wonder if he’s qualified. He must have been an Affirmative Action hire.” I’ve written about this before as have others. Regardless of what I do, I am the embodiment of authority. My credibility, authenticity, and trustworthiness are rarely if ever questioned.

When I challenge my students to critically analyze white supremacy, patriarchy, heteronormativity, etc. no one says, “well of course you said that because you are…”. No one says I have a political agenda or an axe to grind. In fact, I often get kudos for doing it. I’m seen as a sort of selfless freedom fighter. Because of my social privilege I often am able to walk right by my students resistance, neutralize their rhetorical strategies, and be heard. It’s not because I’m a better teacher (note that some critiques of Gibney have argued she’s a poor teacher). It’s because I’m a cisgender, hetero, able-bodied, middle class, white male[1].

And now lets put some empirical meat on these anecdotal bones. Studies find that people of color are disproportionally tasked with teaching required diversity classes where challenging social privilege is more likely to happen (Alex-Assensoh 2003). A qualitative analysis of students’ comments on student evaluations of instruction found that women, especially women of color, were more likely have their authority questioned and to be seen as biased or affected by their personal politics (Perry et al. 2009; Schueths et al. 2013)[2]. This is just the tip of the empirical iceberg, but it’s clear that, like we’ve always taught our students, an individual’s social location and the social contexts they operate in affect their experiences.

What Can We Do With All of This.

First, David Mayeda on our Facebook page suggests starting a letter writing campaign in support of Gibney and I think that’s a great start. But more than anything else, let’s stop pretending that social privilege ends at the threshold of our classroom. To my fellow faculty of privilege, let us own our privileges, even if we are uncomfortable with them and even if we are attempting to subvert the systems that privilege us. Personally, I’m going to read this story and remember that I am not Shannon Gibney; in fact my experience is probably closer to the three white men who filled the complaint. And then I’m going to work from there.

References:
Alex-Assensoh, Y. 2003. Race in the academy: Moving beyond diversity and toward the incorporation of faculty of color in predominantly white colleges and universities. Journal of Black Studies 34, no. 1: 5–11.

Perry, Gary, Helen Moore, Crystal Edwards, Katherine Acosta and Connie Frey. 2009. “Maintaining Credibility and Authority as an Instructor of Color in Diversity-Education Classrooms: A Qualitative Inquiry.” The Journal of Higher Education 80, no. 1: 80–105.

This was a really eye opening article from the perspective of the authority within an educational system, which I found to be highly intriguing. You accept and acknowledge the fact that these three white boys have more in common with you than you do with Shannon Gibney and make a good point when placing yourself in the shoes of people of color and quickly realize your situation is nothing like the dealings that people of color are constantly struggling with to this day. As a student and a sociology major myself, I find how much the absurd notion of white victimization can truly hinder the future of progress with racial prejudices in our thoughts and institutions and it is important that white people start "screaming" out about these absurdities that still plague equality efforts as well. There is absolutely no argument that can be made stating that racism is not deeply embedded in our structure and wage inequalities confirm the structural racism that Gibney was speaking to his students about. What I find to be the most shocking about the video and your post is the idea of reverse racism. Though you did not explicitly use that phrase, it seems as though you would support an argument that these claims of reverse racism are an oxymoron in itself. I agree with your point that, "because of my social privilege I often am able to walk right by my students resistance...and be heard." You speak about how you embody authority because of the white male that you are and explain how it is a necessity to recognize privileges, but I question the solidity of this conclusion as it does not seem like you back it up with a solution. Once the "faculty of privilege" recognize they are in such a category, what do you feel should happen in teachings to prevent more situations like that from happening?

It is important to debunk the idea of reverse racism in classrooms, which is what I feel is the next step to your conclusion. This will allow students, especially those of privilege (as you define), to recognize that if they were in the shoes of people of color, they would in no way and in no situation have the same access to opportunities as a white person in our society would. On the contrary, it would be wrong to deny that reverse racism has ever been challenged in court. Two women, one white and one of color, were teachers who found themselves at risk for budget cuts in their school. The woman of color learned that she was able to keep her position solely because she was of color. How would you address such a situation as a faculty member trying to explain this to students? A survey done by the Public Religion Research Institute found that "48% of Millennials felt that discrimination against whites is a genuine problem." Systematic studies have yet to be done on claims and situations where supposed reverse racism has occurred, and I think research would allow a better perspective to be made. Though I do not believe much would be found in support of reverse racism, such research would be crucial to the future of racial discrimination claims as our society continues on the path toward equality. As the margin of opportunity inequalities between races slowly decreases, it is inevitable that extremists would begin to make more substantial claims of such reverse racism and studies are a necessity for the future. With equality as the end goal, it is important that we prevent this notion of reverse racism from becoming a norm, as it will do nothing but hinder progression in our society. As a professor, do you think directly addressing the existence of reverse racism in our culture would help the situation, or do you feel as though that would simply serve as another barrier to total racial equality?