“That Grade Is Outrageous!”

If you’ve given a student[1] an F on a paper before (especially a low F), then I’m willing to bet you’ve got an email like this before. There have been times when I’ve given students less than 20% on a term paper because they missed nearly all of the key points and turned in a paper well short of the expectations outlined in the directions. Every time I hand back a paper with an abysmal score, I brace for impact.

Recently, I had a paper go bad. For one reason or another a couple of students received dramatically low grades. Despite my best attempts to preempt the angry emails, they still came. As I read through them, I noticed a couple of patterns. First, my students’ protests tended to focus on circumstances that were at best tangential to paper or grade. They spoke of the dire outcomes that would result if they didn’t get a particular grade. Others told me how hard they tried; often by quantifying the number of hours they poured into the paper.

Second, the students almost never challenged my interpretations of their work or tried to rebuttal my critiques of their arguments. In a sense they were saying, “I may have missed all of the key points as you claim, but I worked too hard to get this few points.” Then it hit me, these students received a poor grade because they didn’t show any critical thinking in their paper and now, upset with their grade, they still didn’t critically think about their paper or the feedback I had for them.

So here’s how I replied to this email and how I will reply from here on when I get a similarly angry email: 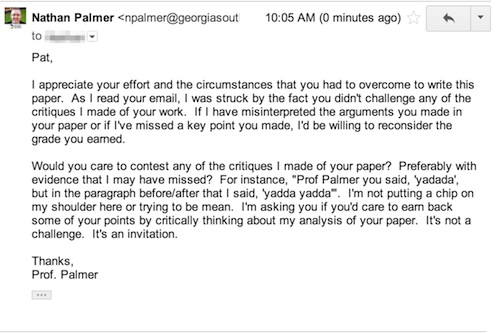 With this approach I am inviting my students to make a second attempt at critical thinking. From here I can recoup the learning opportunity they missed. I can also turn what might be a volatile situation into a learning situation.