Teaching The Housing Crisis of ’08

Standing in the wake of the economic devastation created by the 2008 housing crisis, the world wanted a neck for the noose. The way the rich and socially powerful parried the responsibility for the sub-prime meltdown onto low income home owners, especially homeowners of color, is one of the most illustrative examples of hegemony and how our problems are socially defined. I feel a moral obligation to teach this in my social problems courses.

After the crash of ’08 the question on everyone’s mind was, “how on earth did this financial crisis happen?” One popular answer, if not the most popular, was, “people who have no business owning homes bought houses they couldn’t afford with sub-prime mortgages.” In a sense this logic is saying the economy fell apart, “because of the greed of irresponsible poor people.”

Another answer to the “why did this happen” question should be, “because no one paid attention to banking regulations, loan practices, etc. because they are mind-numbingly boring.” They are supremely important, but painfully boring. Thankfully, there are some fantastic resources to help you teach your students about the ’08 housing crisis. There are many, many more, but I feel Griftopia and Inside Job

Matt Taibbi is one of my favorite writers and political reporters[1]. He wrote an astoundingly approachable book on the banking shenanigans leading up to the 2008 financial crisis. I read it cover-to-cover and as a financial lay person I felt I understood the crisis to a depth I couldn’t have previously imagined.

I used Griftopia’s third chapter, Hot Potato: the Great American Mortgage Scam because it connects the individual level story of a man, with the pseudonym Eljion Willams, to the practices of large banking firms such as AIG and Goldman Sachs. Each step along the way Taibbi shows how each player in the financial system was incentivized to “put a torch” to the players one rung beneath them.[2] Taibbi asserts that the answer to, “how on earth did this financial crisis happen?” should be, “because it was profitable for the socially powerful actors and institutions.” Taibbi connects the individual level with the macro level and at the same time shows us how decisions at the institutional level had a cascading series of consequences at every level of our society. For this reason alone, it’s a must read/teach.

The Oscar award winning film Inside Job explains the complexities of the credit crisis in a simple yet compelling manner that feels closer to a “who done it” mystery than a film about financial deregulation. Narrated by Matt Damon, the film interviews some of the industry leaders and decision makers who were in the driver’s seat as the economy went over the cliff.

At times I writhed in my seat as the filmmaker scathingly interrogated the reckless leaders and decision makers. At other points in the film we hear from the academics and analysts who warned of the unsustainability of the deregulated market (who were at the time dismissed as Chicken Littles).

Given that I showed this film at the university level, my class and I were most interested in the film’s argument that the economics/finance/business side of higher education has been co-opted by corporate America. To quickly summarize the point; these professors are highly compensated to serve on boards or in another advisory capacity for the big banks and then they publish research that legitimates the practices that best suite the needs of these same big banks. After showing the film my students were on the edge of their seats, ready to vent their frustration and no more so than the frustration they felt about the role academia played in the collapse.

In my search for videos about the housing crisis I was recommend the video below. I watched the first few minutes of it and was enthralled. I was set on using the video, but not because of what the video overtly teaches, but for what it teaches subtlety.

The Crisis of Credit Visualized from Jonathan Jarvis on Vimeo.

I told my class I wanted them to watch the video closely and that I was going to ask them a peculiar question afterwards. As the film ended I asked them if anything they saw in the video seemed incongruent with what they read about in Griftopia or what they learned from Inside Job. They sat perplexed and answerless. So I ponied up 10 extra credit points to anyone who could analyze the film to find thematic discrepancies between the clip and our other class material (directions here: Word | Pages | Pdf)

The class struggled to find any discrepancy. When they came back the next day many of my students protested saying they, “watched the video over and over and there’s nothing.” I threw the clip on the projector and fast forwarded to the seventh minute. Here the video posits that the “turning point” of the credit crisis was “irresponsible” home buyers who bought a “big house” they “not surprisingly” defaulted on.

for more on this) or that many sub-prime borrowers actually had credit scores that warranted a prime loan (which would have saved them loads of money). Recently Bank of America paid a $335 million settlement to avoid going to court and face charges of what Attorney General Eric Holder described as, “systematic discrimination against blacks and [H]ispanics”

Finally this ignores that predatory banking practices often sold loans at one rate and then used a variable interest rate to ratchet up the rate quickly; in doing so they would “put a torch” to the family, as Taibbi puts it, to collect on the insurance money. All of these behaviors were incentivized by our social institutions and that is painfully overlooked in this film. This is not to say there was no greed or irresponsibility at the lowest level of the banking system, of course there was, but to tell half the story is… wait for it… irresponsible.

And that’s just what was said. Given that this was supposed to be a “visualized” accounting of the crisis, we should expect that a great deal of intent went into the selection of the images used to depict it. I put the slide below up on the screen and asked my class to break it down: 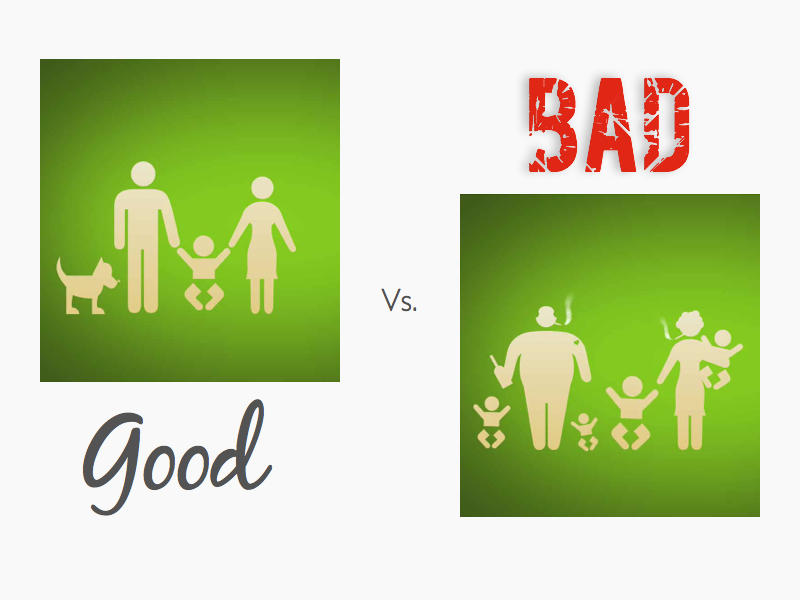 They quickly noticed that “irresponsible” home buyers were fat, had lots of kids, smoked and drank alcohol. If you look closely at the video, the children of the irresponsible home buyers wiggle on screen, which could be interpreted as they are less well behaved. Again, if you find yourself saying, “who would put that level of attention into something like this?” I would argue, a graphic designer who was visually depicting a story.

What’s remarkable about the video is how easily the mischaracterization of the poor went unnoticed. Some of my students reported watching the video, “over and over,” but couldn’t find a thing. And they weren’t alone the video was featured on NPR’s Planet Money and was watched nearly 3 million times without drawing much ire.

After our discussion they saw it clear as day. We then talked about conflict theory’s argument that power hides in plain sight and they got it. We finished by talking about the tenet of conflict theory that argues that those with social power use it to deflect blame away from themselves and onto the less powerful. It was a fantastic conversation to end our discussion of the housing crisis.