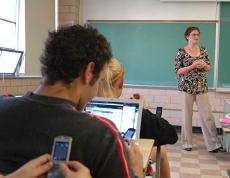 Some students won’t listen to you. You wrote it in your syllabus that no cell phones, laptops, or other distracting technology is allowed in your classroom , but they’re doing it openly right in front of you.

Recently a professor was arrested for battery after he shut a student’s laptop to get her to pay attention and stop surfing the web during class. Distracted students are clearly a problem everywhere. So what to do?

Well I have a 100% effective solution to stop to stop this annoying problem. Are you ready… Stop nagging them to put away their technology and teach your heart out to the students who are paying attention.

“Wait, what? You mean let them disrespect me to my face?” you may be thinking right now. Yep. That’s basically what I’m saying. Except make one minor change. Don’t view it as being disrespectful or an affront to your authority. If you haven’t stopped reading in disgust yet, let me explain how I handle the situation and why I do it this way.

On the first day of class I go over the syllabus and discuss at length the no technology policy in my syllabus. I share with the students recent research that shows distracted students do worse than their peers who don’t divide their attention. I even show a clip of FRONTLINE:Digital Nation that talks about how humans are crummy at multitasking especially when they think they rock at it. I give them every opportunity to see that distracting technology is hazardous to their grades health, but alas some students don’t listen.

Last semester I had a class that was texting all the time. At first I thought they just forgot the policy on the syllabus, so I politely reminded them and tried to make light of it with a joke. The students responded to that with disdain. A few classes later when I felt my students where totally disengaged and wrapped up in their technology so I gave them another reminder this time with a stern, but patient approach. The students responded to that with disdain. A few classes later, I saw the exact same few students with laptops out, cell phones in hand. I tried bitting my tongue, but couldn’t so I started a discussion about Goffman’s presentation of self 1 and how their desks were not invisible forcefields hiding their texting from my view. Despite my attempts to be funny the students first starred blankly or rolled their eyes, then responded with –wait for it– disdain.

I was beyond frustrated. I’d like to think I am clever person and yet all of my attempts to curb student texting, laptop surfing, and headphone wearing had been futile. I commiserated with my colleagues, grumbled to myself about it in my office, and started writing a blog post about this phenomenon. I got half way through before I realized the problem. I was trying to change someone else’s behavior by telling them what to do. Which any sociologist can tell you isn’t highly effective.2

Fact is, we can’t force students to do anything and we need to own that like yesterday. If you disagree with this, then I think you’re deluding yourself or being an unethical teacher. For me personally, this is a fact I think I have down and then something pops up that reminds me I am still holding on to this dead idea.

Our Power and Our Authority

Weber says that authority is power that people perceive as legitimate as opposed to coercive. When we try to force our students into complying with our expectations of behavior we must consider if the students perceive this use of power as legitimate.

Under some circumstances I don’t care what students think. If a student is personally attacking another student with hate speech, I am going to intervene without regard for how my actions are perceived. However, if the “offense” is much smaller like sleeping in class or texting their BFF I think we should consider how our students perceive these acts. We teach our students everyday that our world is socially constructed and not individually constructed, but when we only consider our own worldview and disregard the rest of the classes worldviews, we are role modeling a behavior antithetical to developing a sociological imagination.

If our students perceive the acts of texting, sleeping, or surfing the web as a legitimate use of their time in class, then it unfortunately doesn’t matter that you disagree. Your authority is compromised when you use your power in ways that your students perceive as coercive. And, again, it doesn’t matter how unfair you think that is. You can’t control how they perceive you and your use of power.

I was watching Oprah the other day (I know) and she had David Arquette on (I know, I know) and he said his yoga instructor at rehab (just keeps getting better doesn’t it) told him that, “anger is like drinking poison and expecting another person to die.” Venting your frustration at your students for not paying attention to you may feel right or even good in the moment, but it will only reduce your authority and subsequently reduce the attention they give you.

Sing For The Ones Who Came to Hear You Sing

So what can you do about student inattention? Pour your soul into teaching for the students who are listening to you. Engage with them as much as possible and they will love you for it. If you focus on the students who are present and reward them with an inspiring class they will help you create a class norm of attentiveness and they will enforce sanctions on the non-compliant precisely because they believe you’ve earned that level of respect and authority. These students will be the ones saying “Shh!” when students talk loudly or are being disruptive. When it becomes the norm to treat you with respect, other students will follow suit. This is the only option that doesn’t weaken your authority.

So back to my solution. First accept that you can’t force your students to stop using technology in class and maintain your authority. Second, lay the ground rules at the start of the semester to encourage their attention. And finally, teach your butt off to the students who are listening and more will follow.