“Did you hear that Georgia is going to pass a version of the Arizona immigration law? That totally sucks!” a student says to me. I pause for a moment and respond, “I have heard that and I called Georgia and told it to go to its room without supper and think about what it’s done.” The student cocks their head to the side with a bewildered look on their face.

I teach in Georgia. I and most of my students are citizens of Georgia, the US, and all of us are members of Georgia Southern University (GSU). So it strikes me as odd that students speak of Georgia, the United States, or GSU as though it is something outside themselves- something they are not a part of.

What’s really going on here is reification. The students speak of Georgia as though it is an entity in and of itself, but it’s not. It’s made up of people. I am Georgia. They are Georgia. This is painfully obvious when we talk about our university. GSU is nothing more than the students, faculty, staff, and administration (all of whom were human beings, last I checked).

Reification, simply defined, is mistaking something composed of or created by humans as being an entity unto itself. We do this all the time when we talk about “the economy” or “the government” or most of all “the system”. “The system” doesn’t exist on its own, “the system” regardless of what system we are talking about is comprised of humans who are typically moving a mouse, pushing buttons on a keyboard, and squinting at a monitor.

Am I just splitting hairs here? No, because we cannot change anything unless we know where to direct our energies. When we talk about “the economy” we ignore that people (policy makers, business leaders, etc) make the decisions that direct the economy and affect each of our lives. If we believe that “the economy” is a big hairy monster that needs to be coaxed back into giving us jobs (see below), we make ourselves powerless. People can be changed, behaviors can be modified, but mythical creatures cannot. 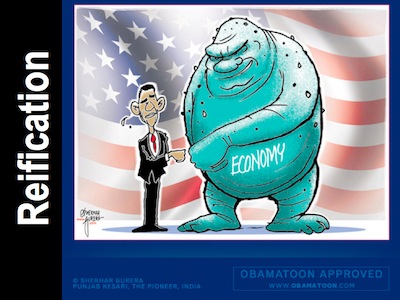 We can empower students by bringing social systems into a human perspective. To teach reification I compel my students to see that, “WE are Georgia. WE are the United States. WE, especially, are GSU. If you don’t like something, let’s work together to make social change.”