The Color of Fear 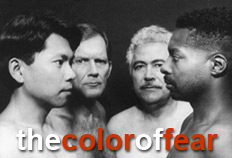 The Color of Fear is a emotionally charged film that will leave your students talking and rethinking their perception of the world around them. The film places eight men in a room to talk about race, prejudice, and discrimination. There are two men who are Hispanic, two who are African American, two who are Asian American, two who are White, and the film’s director Lee Mun Wah. The film was released in 1994, but every semester my students tell me that it is the best and most relevant video we watched in my sociology courses.

The film seems to have aspired to be a round table discussion, but turns more into an intervention for David Christensen, a white man who is unwilling to accept that the men of color actually experience discrimination. Throughout the film the men of color share times they have been the target of racism and discrimination and each time David minimizes and discredits them by saying that their claims are, “unfounded”. David tells them men of color that racism is no longer a problem and that the problem these men are experiencing is all in their heads- that they are seeing something that is not there. Not surprisingly, this infuriates the men of color, especially Victor a African American man.

Victor at two points in the film becomes angry at David, but each time he raises his voice his words become a razor sharp scalpel dissecting David’s flawed logic and inaccurate perception of reality. Victor challenges David to see that in the United States being American frequently is shorthand for being White, that the world that is open to David as a White man is not as fully open for men of color, and that issues of race, prejudice, and discrimination are alive and well even if David chooses to ignore them. Click here to see a video of the second time Victor vents/educates David. This time Victor presses David to see that social and systematic inequality exists:

The video also discusses a variety of other topics including inter-ethnic prejudice and discrimination, masculinity, and Affirmative Action. However, after using this video a number of times it became apparent that the David/Victor relationship was by far the most compelling and eye opening part of the video for many of my students.

Up to now I have taught sociology to classes that are predominately White. On the first day of my Race and Nationality courses many of students are unsure why a course like this is needed in a post Civil Rights Movement era. Some are uncomfortable with the idea that White privilege even exists. I tell my students on the very first day that in any group or community there are multiple realities- multiple ways of seeing the exact same situation. Often my students think that I am out of touch with reality or that I’ve “read to many books”.

What I love most about The Color of Fear is that after watching the film it is crystal clear how someone could live in a unjust world and be totally unaware of it. David seems to be a good, honest, hard working man, but yet he is surprised to the point of disbelief when he hears the men of color discuss how racism has affected them. When David finally accepts the experiences of the men of color I can feel the whole room decompress. Many of my White students have told me that they identify with David and all of my students tell me that they better understand White privilege. Furthermore, this is a great sociological piece because it opens doors in students minds and begs them to see beyond the individual and to how the social affects each of us.

As is probably apparent by now, this film is controversial. I have shown this film over 10 times now and I have a few recommendations for anyone intending to share it with an audience. First, if at all possible watch the entire film in one setting or at the very least two classes back to back. The video is about a process of coming to terms with the world around us and if you stop in the middle it may leave students thinking that there is no hope for a positive conclusion. Secondly, don’t let students discredit Victor during the film. I have had students become uncomfortable by Victor’s outbursts and make disparaging remarks about him like, “is this guy crazy or what?” Each time I have stopped the video and asked the class if they feel Victor is crazy, unhinged, or out of control. Most students say no. If you don’t address the comments right away I fear that students will write Victor off and quit listening to him.

I have my students write a paper on the film and you can find the directions for that here. I focus primarily on David, multiple realities, and the dichotomization of racism.