The Dichotomization of Racism 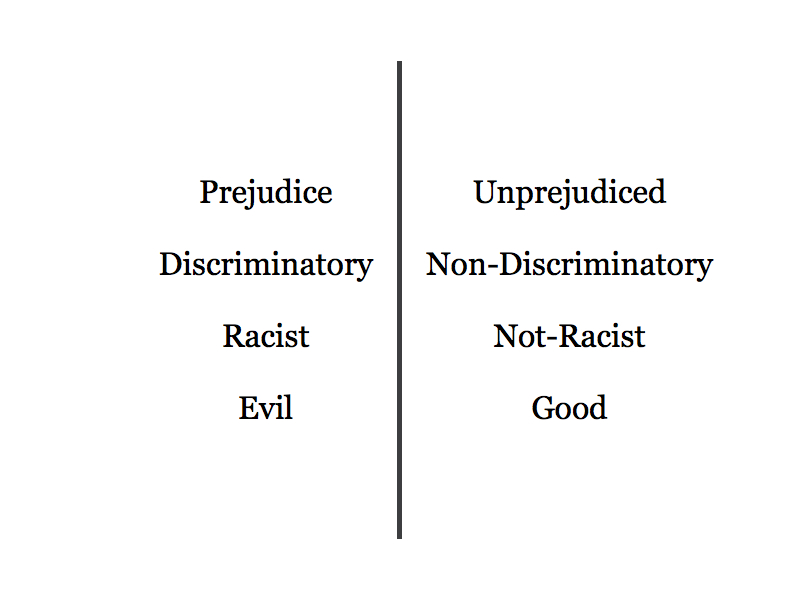 As a society we have dichotomized racism, prejudice, and discrimination into things that you are or you are not. We have split the world into two camps- the good and the evil. To be someone who is a racist in many students minds means being an overt bigot who puts a great deal of thought and effort into hurting people of color. As Feagin (2001) discusses, racism is a thing other people, specifically other white people, do. As long as you know someone who is more racist than you are then you are not a racist yourself. Dichotomization implies a clear dividing line between those who are and those who are not. Without shades of gray a person need only know someone who is more racist than they are to assume that they are on the other side of the dividing line.

Dichotomization prevents people from critically analyzing their thoughts and behaviors. Most of us need to feel that we are good people. So when someone says to us, “hey what you just said is flat racist” what we may hear is “Hey what you said makes you an evil person”. You can see the evidence of this in how people react to such statements. “I am not a racist. How dare you pull the race card on me!” Dichotomization doesn’t allow people to make mistakes, own them, and apologize for them. Under dichotomization, to admit to saying something racist is to admit to being, at least partially, an evil person. In this way dichotomization prevents people from growing and leaving stereotyped ideologies behind.

As soon as possible you need to address this misconception. Call it out by name and show students how it is one of the major barriers keeping many of us from taking an honest look at ourselves. How can we change what we won’t acknowledge?

Demonstrating The Fluidity of Prejudice & Discrimination

The single best way to show how good, moral, educated people can slip into bigoted or stereotyped thoughts is to own your own mistakes in front of your class. I tell my students of a time when I shared an office with two other graduate students. I was working on a lecture for my Race & Nationality class when my computer went on the fritz. I phoned the IT person and he said he would send his assistant down as soon as he came in. Shortly after my officemate Jill [Not her real name], a white woman, told me that her husband was coming to pick her up for lunch, but she had to leave the office for a bit. She asked if I would receive him and have him sit at her desk and wait for her. I said of course.

Some time passed and I heard on knock on the door. I looked up to see an Asian American man with an orange polo shirt leaning against the doorframe. His face showed his was confused by my presence. We both paused for a moment. “Oh you must be hear to fix my computer,” I said as I started to tell him what happend just before my computer broke. “I’m looking for Jill,” he interrupted with his hand extended to stop my misguided assumption. I could feel all of the blood rush to my face. I looked to the floor and collected myself. “I am so sorry. I made an assumption based on a stereotype. I am so embarrassed. Jill went upstairs for a sec. Have a seat. She’ll be right back.” Given my gross and offensive assumption Jill’s husband was beyond gracious as we talked about what we both did for a living. The irony of preparing a lecture on prejudice & discrimination while simultaneously participating in both was not lost on either of us.

Demonstrating my own vulnerability to false, stereotyped, and prejudice logics and discriminatory actions shows my students that I am human and not beyond any of the things we talk about. I share with them that many students have told me that they are “color blind” and that they do not participate in prejudice or discrimination of any kind. I ask them how is it possible that a person like myself who has read more about the topic than they have, who has written more papers than they have about the topic, who has spoke publicly more often about this topic is not invulnerable to participating in them and yet these students have it all figured out. How can someone who is not living and breathing these ideas be able to avoid it so completely? Every time my students answer back, that it isn’t possible.

Exposing your own mistakes is risky. You could lose your credibility with students or maybe even your authority. Students could judge you and become angry with you. However, I think that role modeling how to take ownership of your mistakes empowers students to critically analyze their own lives. How can we ask our students to do something that we are unwilling to do ourselves?