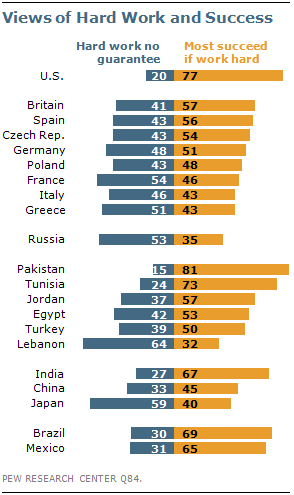 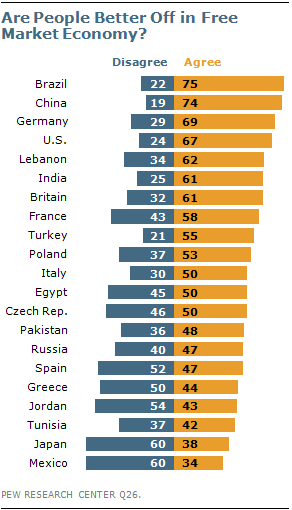 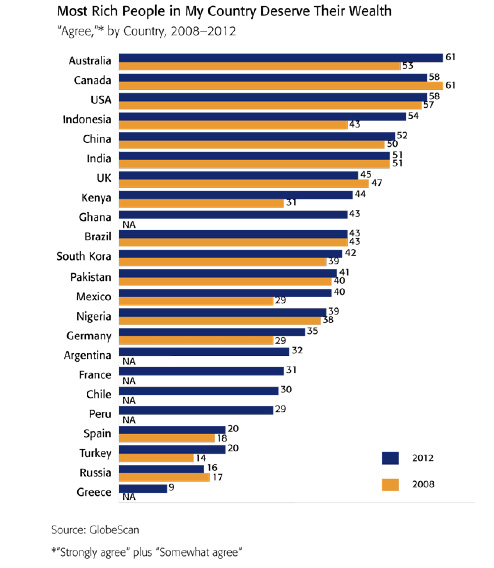 Are Americans Aware of Heightism?

According to a Gallup poll, “Americans believe that one’s stature has a decided effect on a variety of important dimensions.”

More people would prefer to be taller than shorter: 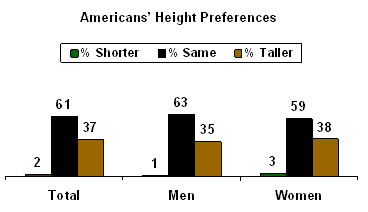 People think that taller people have a greater likelihood of getting respect at work, and even getting promoted: 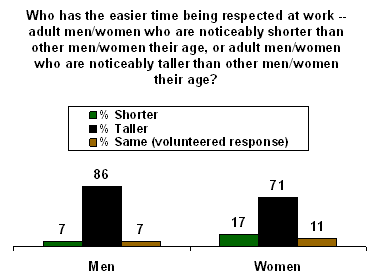 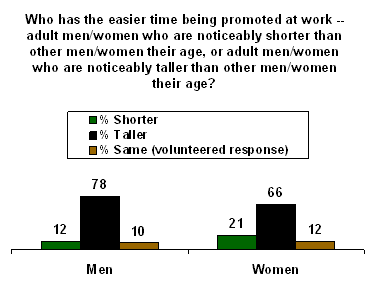 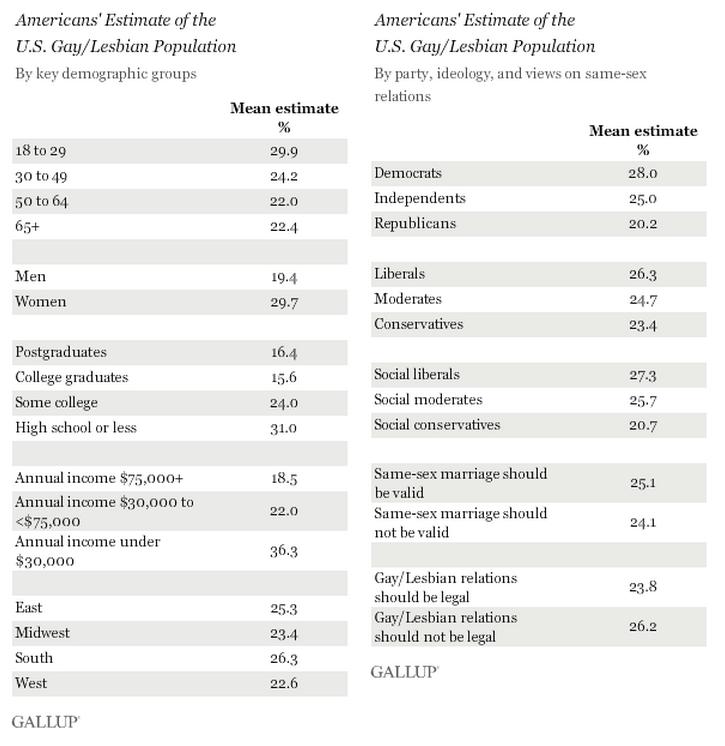 Are Our Politics More Consistent Than Our Opinions?

Americans were recently asked whether they believed that President Obama could do much to lower gas prices.  The answer was highly correlated with political party affiliation: 65% of Republicans said “yes,” while only33% of Democrats said the same.

In fact, the President has very little control over the price of gas.  According to the Washington Post:

Today’s oil prices are the product of years and decades of exploration, automobile design and ingrained consumer habits combined with political events in places such as Sudan and Libya, anxiety about possible conflict with Iran, and the energy aftershocks of last year’s earthquake in Japan.

An expert calls the idea that a President can substantially influence the oil market “preposterous.”

So, does this mean that Democrats are smarter about econo-geo-politics?

Nope. It just means a Democrat is in the White House.  The pollsters, WP/ABC News, asked the same question in 2006, during the Bush Administration.  That year 73% of Democrats gave President Bush some of the blame for gas prices; only 47% of Republicans did. 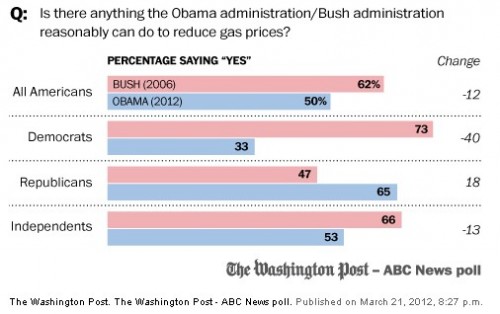 Such switches, argues political scientist Brendan Nyhan, are typical.  NPRreports: “On a range of issues, partisans seem partial to their political loyalties over the facts. When those loyalties demand changing their views of the facts, he said, partisans seem willing to throw even consistency overboard.” Nyhan believes that the phenomenon might be related to “cognitive dissonance,” a sense of unease that comes from holding two incompatible beliefs at once.  If you like the President, in other words, it might be hard for you to also think that he could do something about gas prices, but isn’t.

It’s Not So Hot Being a Republican

Hot enough for you?  Your answer might depend on who you’re voting for.

World views affect not just how we interpret what we see; these views influence what we actually experience.  That was the point of the previous post.

Do people who reject the idea global warming perceive the weather as being cooler?  Gallup just published the results of a poll that asked people if this winter was warmer than usual. Unfortunately, Gallup asked only for political affiliation, but it can stand as a rough proxy for ideas about global warming.  So the data are suggestive, not conclusive. But for what it’s worth, Democrats were more likely than Republicans to say yes, it’s been a warm winter.  Some of the difference can be attributed to geography (Democrats living in places that had a much warmer winter than usual). But I suspect that at least part of the 11-point difference is political. 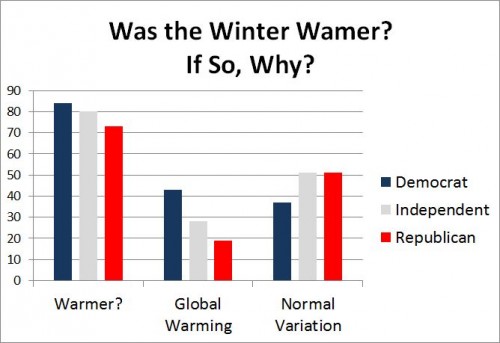 Republicans reject the idea that the world is getting warmer — that’s a question of science — but they also experience their own immediate environment as cooler, which is a matter of perception.

As the graph shows, Gallup then asked those who did think that the winter was unusually warm what they thought the cause was — global warming or just normal variation..  As you might expect, political affiliation made a difference.   Democrats were more than twice as likely as Republicans to cite global warming as the cause.

You might have heard that, after the birth of his daughter with Beyonce Knowles in January, Jay-Z has sworn off calling women “bitches.”His change of heart is illustrative of a trend among fathers documented by sociologists Emily Shafer and Neil Malhotra.  Their article measured the effect of a new baby’s sex on a parent’s gender ideology.  Their findings?  Men’s support for traditional gender roles weakens after they have a daughter; no similar result was documented for new mothers. 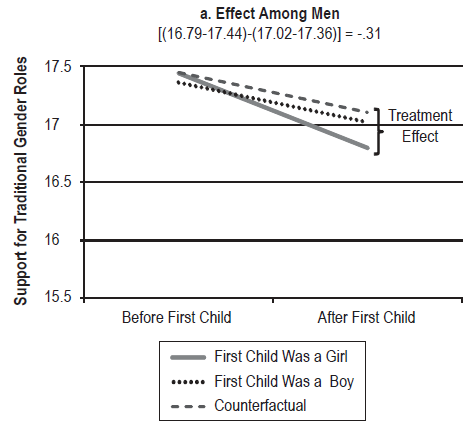 This second graph shows the average change in mothers’ attitudes. Notice that mothers start off with a much lower average level of support for traditional gender roles than fathers and appears to decrease over time.  These changes, though, are not statistically significant. So this study offers no evidence mothers’ ideologies change the way fathers’ do. 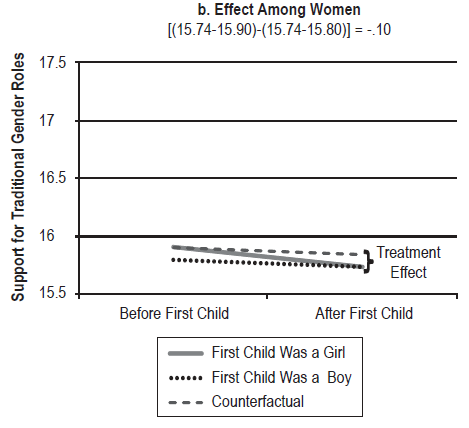 Jay-Z, then, may be experiencing what a lot of fathers experience: a change in their thinking about women inspired by looking into the eyes of their own baby daughter.

Perceptions of Tall and Short Men

In the video below, borrowed from Geoffrey Arnold’s blog on heightism, people on the street in New York are asked to evaluate the likely occupational and class status of two men: one short, one tall.  The results are striking (if also edited and non-random, but still):

See also Arnold’s guest posts introducing the concept of heightism as a gendered prejudice and discussing heightism (and other icky stuff) at Hooters.

We’ve known for a long time that surveys are often very bad at predicting behavior.  To take the example that  Malcom Gladwell uses, if you ask Americans what kind of coffee they want,  most will say “a dark, rich, hearty roast.”  But what they actually prefer to drink is “milky, weak coffee.”

Something that sounds good in the abstract turnsout to be different from the stuff you actually have to drink.

Election polls usually have better luck since indicating your choice to a voting machine isn’t all that different from speaking that choice to a pollster.  But political preference polls as well can run into that abstract-vs.-actual problem.

Real Clear Politics recently printed some poll results that were anything but real clear.  RCP looked at polls matching Obama against the various Republican candidates.  In every case, if you use the average results of the different polls, Obama comes out on top. But in polls that matched Obama against “a Republican,” the Republican wins. 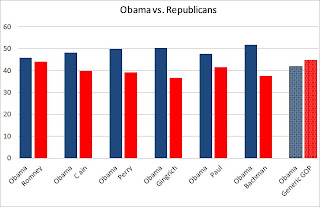 The graph shows only the average of the polls.  RCP also provides the results of the various polls (CNN, Rasmussen, ABCl, etc.)

Apparently, the best strategy for the GOP is nominate a candidate but not tell anyone who it is.