Or, at least, we’re constantly told that women love shoes.

This ad in the August 2010 issue of Elle Canada got a “major eye roll” from JT.  Women need focus (focus vitamin water, that is), so that they can shop for shoes.  They’re just so many kiiiiiiiiiinnnnnnnds! 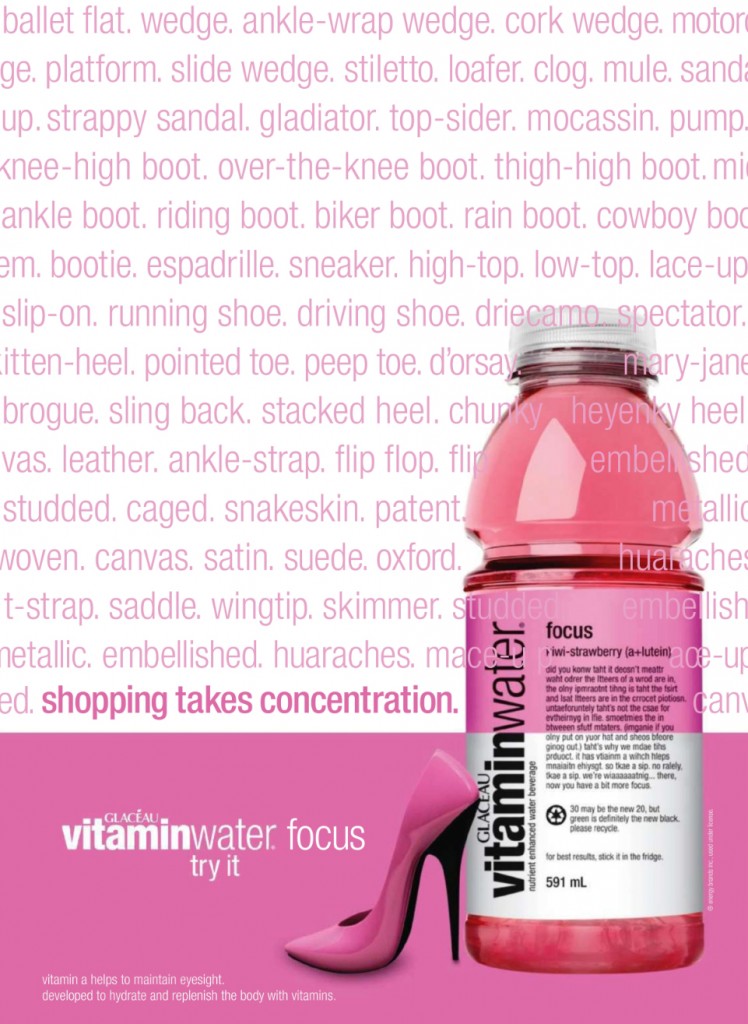 Meanwhile, Jacob spotted this Nine West sign in the Pittsburgh airport.  It reads “Everything A Woman Wants: MORE SHOES AND PURSES!”: 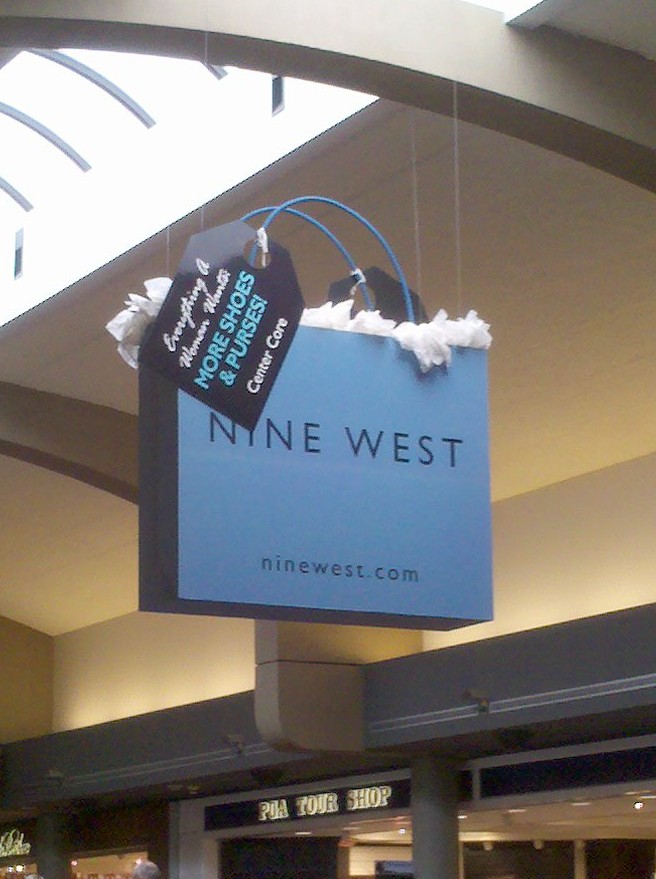 Both of these ads present women as obsessed with shoes (and purses).  I am not obsessed with either.  I buy all my shoes at thrift stores (except running shoes) and I care so little about purses that Gwen actually buys them for me in Las Vegas and mails them to Los Angeles so that I don’t carry the exact same purse until I die.

The Difference Between Wealth and Class

French sociologist Pierre Bourdieu is famous for helping us understand how economic elites reproduce their own wealth across generations.  It takes money to make money, and that is certainly true.  But as Bourdieu noticed, it wasn’t just money.  Upper-class people had entire ways of living that excluded people without money and people who were newly rich.  They knew the right people (and knew them in common), the right things (e.g., how to talk about yachts), and the right way to act (e.g., which fork to use first).  Other people’s ignorance of these things exposes them to the elite as “not our kind of people.” Even when the elite aren’t biased towards their own on purpose, they’re still more likely to hire the guy who can chat about the most lauded vintage that year, and their children are more likely to marry the children of others who summered alongside them, and so on.  All of these little things — mannerisms, interests, languages, sartorial choices — send messages that distinguish the elite from the non-elite, preserving the group as distinctly advantaged.

In other words, Countess Luann is right:

Thanks to RGR for linking to this video in our recent birthday post for Pierre!  More Bourdieu-ian posts: taste, dumb vs. smart books, and the Evangelican habitus.

This 40-second commercial for HSBC bank, sent in by Michelle F., is an excellent example of the way that non-white and non-Western people are often portrayed as more deeply cultural, connected to the past, and closer to nature than their white, Western counterparts.  Sometimes this is done in order to demonize a culture as “barbaric,” other times it is used to infantilize them as “primitive.” In this case, it romanticizes.

Running on both English and Chinese language channels, the commercial contrasts the wise Chinese man with the young, white man.  The music, the boats, their clothing and hats, and their fishing methods all suggest that the Chinese are more connected to their own long-standing  (ancient?) cultural traditions, ones that offered them an intimate and cooperative relationship to nature. Simultaneously, it erases Chinese modernity, fixing China somewhere back in time.

Other posts on the modernity/traditional binary:

What Counts as Indian Art?
Whites can Reconquer the America’s with Kahlua

Or browse our tag on the false modern/primitive binary.

NPR recently featured a story on Kevin Michael Connolly. Connolly is an athlete, adventurer, author, and photographer who was born without legs. 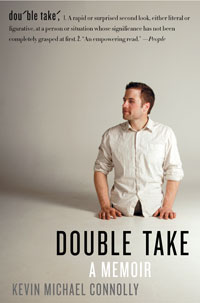 In his memoir, Double Take, he talks about travel. People around the world, he explains, tend to stare.  And, with his camera, he stared back.

Curiosity, it appears, is very human. But people in different places tend to speculate differently as to the source of his lost legs and that, he discovered, is quite culturally specific.

In Sarajevo, people tended to think that he’d lost his legs in mines during the Balkan conflicts.  In New Zealand he overheard a child asking his mother if he’d been attacked by a shark.  In Montana, he was asked if he still wore his dog tags from Iraq.

I broke my leg five weeks ago and, for what it’s worth (not much really), my experience, also, is that people speculate based on their own experiences and their relationship to you.  An avid lindy hopper (12 years now… well, not now exactly, but again real soon), many of my dance friends immediately inquire as to whether I broke my leg dancing.  My raunchy friend, Fancy, asked if I broke it “doin’ it.”  The second most common guess is that I broke it stepping off a curb.  It turns out lots of people do that.  Who knew!

For more, see Connolly’s website or listen to the NPR Radio Story.