Adrienne K., from the excellent blog Native Appropriations, recently appeared on the Al Jazeera English show The Stream to discuss issues of cultural appropriation of Native American cultures in fashion and home decor, sports mascots, and so on. It’s a great segment about Native American concerns specifically, and the broader issues of appropriation, respecting different cultures, and how responsible different groups are for educating themselves and others about cultural traditions:

The Promise and Perils of Hook-Up “Culture”

In her own research, Lisa has found that students want sex to be pleasurable, empowering, or meaningful.  But, alas, they seem to have difficulty achieving any one of those things in great measure.  The culprit, she concludes, isn’t hooking up, it’s hook up culture.  When a hook up culture dominates, all other ways of being sexual are repressed, and that leaves many students involuntarily celibate or having sex they don’t really want. The solution: an opening up of sexual options that allow students to truly, genuinely explore their own sexualities safely.

Franklin and Marshall College arranged to have the lecture filmed, but Lisa was too shy to post it on Soc Images. But she sent me the link to the talk, and I have no such misgivings. Unfortunately, the camera was set up at an angle where you can’t see the PowerPoint presentation that went along with the lecture, so you’ll have to look through it separately if you’re interested (slideshow and transcript if you’d rather read).  Lisa’s got other talks too, if you’re interested, and I know she loves giving them.

Common Hour: The Promise and Perils of Hook-Up Culture from Franklin & Marshall College on Vimeo.

Common Hour: The Promise and Perils of Hook-Up Culture from Franklin & Marshall College on Vimeo.

Humans Across Time and Space

I am always suspicious of invocations of the phrase “human nature.”  It is not necessarily because I think there is no such thing, it’s simply that it is typically invoked with little consideration of the vastly diverse physical, cultural, and physical-cultural contexts in which human beings find themselves, and have found themselves.  This 3 1/2 minute introduction to a BBC special, Human Planet, sent in by (my mom) Kay West, illustrates some of this diversity.  While I’m a little anxious about the exotification that the clip might include (especially of “the primitive”), I still think it does a wonderful job of hinting at the wildly different contexts in which humans live:

Found at Blame it on the Voices.

Eyes on the Flies

People who design men’s rooms seem to have the working assumption that men are sexist pigs.  Those urinals that seem to mimic sex (in Lisa’s pimp-my-urinal post here) illustrate the sexist part – ideas that are important mostly outside the men’s room.  But inside the men’s room, it’s the pig half of the phrase that’s important.  Men can be slobs, especially at the urinal.

At airports, for example, jet lagged travelers, men at least, tended to be, how shall we put it, careless? aimless?

Americans tend to frame problems in moralistic terms. If something is wrong, drug use for example, punish the wrongdoers.  And if that doesn’t work, make the penalties even harsher.  Applied to the problem of spillage and splash in the men’s room, we might expect to see signs warning: “No Spillage or Spraying.  Penalty up to $500 fine.”

The Dutch have a more practical approach, more focused on solving a problem than on punishing evil.  The Dutch also have a reputation for cleanliness.  Years ago, when the men’s rooms at the Amsterdam airport were looking and smelling like, well, like men’s rooms, Schiphol, the company that runs the Amsterdam airport, looked into the problem. And the problem was  that most men weren’t looking.  They simply didn’t watch where they were going.  So Schiphol came up with a simple and non-punitive solution: a fly to draw the user’s attention.

The idea was that men would aim for the fly – the stream would go from one fly to another (I’m sure this pun doesn’t work in Dutch) – and the men’s room would stay cleaner.

It worked.  A study by Schiphol’s social science team found that fly urinals had an 80% reduction in spillage.  Some years after that, JFK hired Schiphol to run the International Arrivals Building there.  So now at JFK too, the urinals have the target flies.  At the Newark airport, I saw urinals with a cartoon-like bee (a realistic bee might have might have triggered a counterproductive startle and flinch). 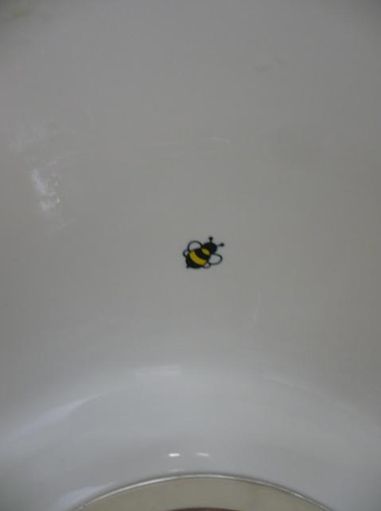 Visualizing Culture: The Case of Color

I’ve argued that the visual aids used in computer programs designed to help us learn new languages are ethnocentric, generic, and uninformative.  Since then, I have been working on an alternative to these images, compiling a database of culturally organized images called the Culturally Authentic Pictorial Lexicon (CAPL).

What strikes me as both a student and a professor of language and culture is that the visual world differs so greatly across cultures and even minor differences are telling in how we organize and perceive our world. Color is one of the easiest ways to find differences in cultures. I have previously discussed the linguistic and cognitive differences of color, but now I want to show some simple examples of color in culture through analysis of various postal systems.

In China, the postal system uses a deep hunter green: 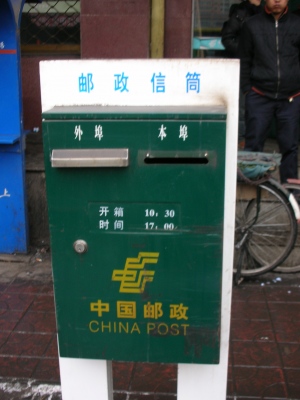 In Japan, it is a bright red, much like England. 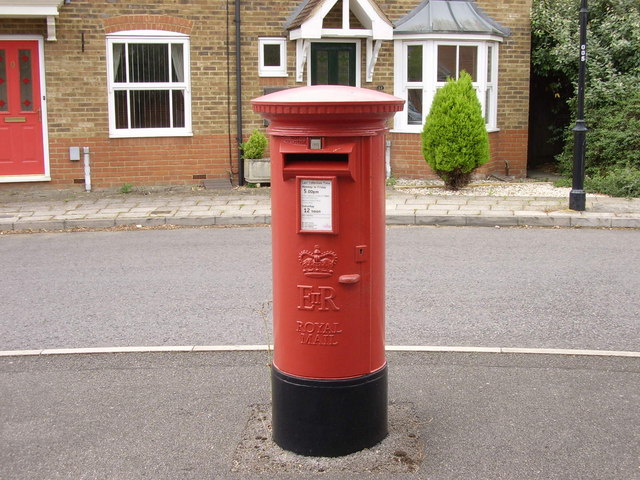 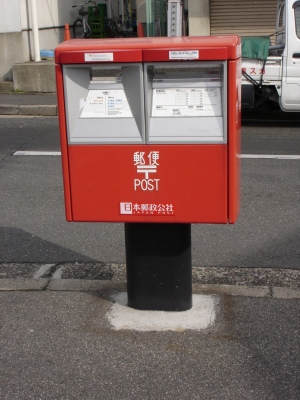 In Germany, it is a bright yellow (think DHL): 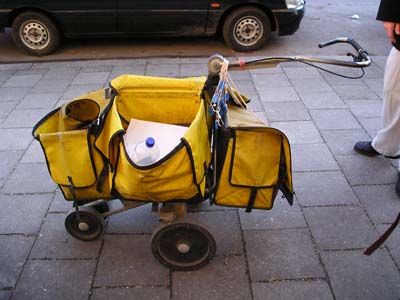 In Russia, it is a lighter but similar shade of the deep postal blue in the U.S. 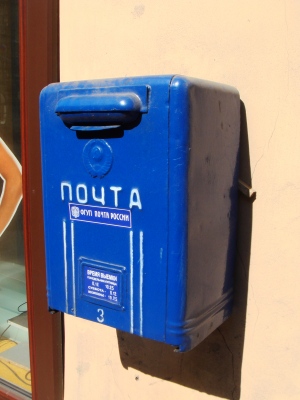 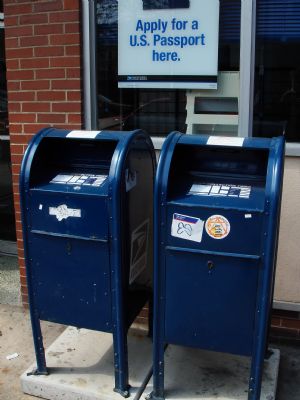 This example of postal systems is an easy way to illustrate how color becomes one of the central ways to communicate and, although the same message is shared across cultures, the path to that message varies through color.

Michael Shaughnessy is an Associate Professor of German and Chair of Modern Languages at Washington & Jefferson College.  In addition to German language, literature, and culture, he has a professional interest in educational technology, especially the authenticity of multimedia imagery.  His book German Pittsburgh (Arcadia Publishing) highlights the contributions of German speaking immigrants to our area.

Setting the Agenda on Trump

Discussing media attention to Donald Trump, Jay Smooth (Ill Doctrine) describes what sociologists call agenda setting.  The phrase refers to the media’s ability to shape what we think about (and what we don’t think about), if not what to think about it.  That is, the media can’t necessarily tell us what to think, but it can certainly keep some issues on-the-agenda while leaving others invisible to us.

Getting Past the Enlightenment

In this 11 minute animated talk, Matthew Taylor argues that scientific study of humans in the tradition of the Enlightenment has taught us, ironically, that Enlightenment values alone cannot be trusted to usher humanity into a better future.

Spam: The U.S. and Korea

In the U.S., Spam is usually considered a food for poor people; people make fun of it as an inexplicable meat. In contrast, Spam is very popular in South Korea. Spam was introduced to Korea during the Korean War (1950-1953) and today it is a popular food item loved by all walks of life. Growing up in Korea, I distinctly remember that it was “cool” to bring a slice of Spam in a lunch box when I was kids. Even today whenever I go home, my friends take me to eat a spicy Spam stew; it’s a special occasion.

Not at all considered a food for the poor or the “trashy,” as it commonly is in the U.S., in Korea Spam is a luxury item. Spam can be a great gift for your boss or your business clients. The photo below shows Spam for sale at a luxury hotel. The set on the top shelf cost about $60 and the set on the second sells for about $42. 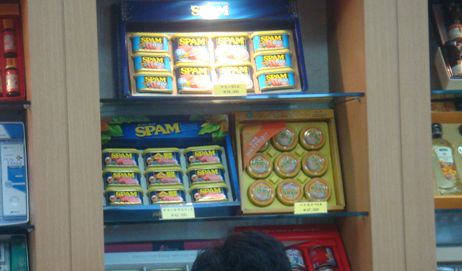 Perceptions of Spam, then, are cultural. From an American perspective, the popularity and prestige of Spam in Korea may seem weird. But from a Korean perspective, it is perfectly sensible… and with boiled rice and kim-chi, totally delicious.

Sangyoub Park is an assistant professor of sociology at Washburn University, where he teaches Social Demography, Generations in the U.S. and Sociology of East Asia. His research interests include social capital, demographic trends, and post-Generation Y.