The built environment reflects our social world. From urban streets that encourage neighborly relationships, to “hostile design” and policing practices that keep people out of public spaces, the physical structure of a space carries with it a whole set of assumptions about how people should interact in that space.

But social structure isn’t always just imposed on us by architects and city planners. It also invites the opportunity for improvisation and innovation to create new norms. A great example of this is the emergence of “desire paths“—the people-made paths that defy, or improve on, the work of urban design.

Desire paths were the bulk of my commute for years without even realizing it. When you walk a lot, you start to see how much our neighborhoods aren’t built for this most basic kind of travel. It is fun to spot these paths along the way, because they show little pockets of collective action where people have found a better way to get from point A to B. Authors like to highlight how some universities, for example, even wait for desire paths to emerge and then pave them to fit students’ commuting routes. 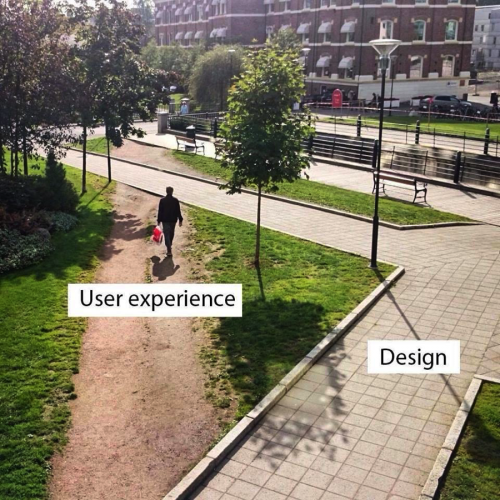 That said, it is also important to pay attention to the limits that urban design, like all kinds of social structures, continues to impose in our communities. Research shows that walkability may only be weakly related to the social health of a neighborhood, since community cohesion takes more work than just putting people in the same space. Walkable neighborhoods also attract more drivers as people commute in to walk around to shops and restaurants. My alma mater, Michigan State University, paved a ton of desire paths in student neighborhoods across campus. It was great, but if you needed to get to the other side of campus for class in a pinch, there was still the matter of that big stadium complex in the way. Sometimes social improvement still takes a bit more conscious effort.

Our campus put out a big bulletin and posted signs begging students to stop using a particular desire path because it was killing a 100 year old tree.

Hi, a good topic to think about, if you are interested in this topic, then I think that it will be interesting for you to look at https://edubirdie.com/coursework-writing this educational platform where you can find more useful information.

We at Unique Submission. We have our ability in each type of Online Assignment Help which Includes Dissertation Writing, Essay Writing, Assignment composing, Research Proposal Writing, Admission essay composing, Coursework composing and many more.