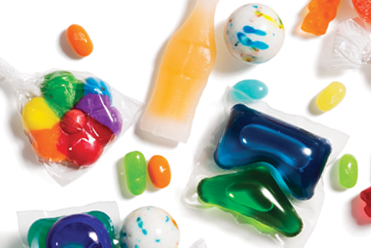 My gut reaction was that nobody is actually eating the freaking Tide Pods.

Despite the explosion of jokes—yes, mostly just jokes—about eating detergent packets, sociologists have long known about media-fueled cultural panics about problems that aren’t actually problems. Joel Best’s groundbreaking research on these cases is a classic example. Check out these short video interviews with Best on kids not really being poisoned by Halloween candy and the panic over “sex bracelets.”

In a tainted Halloween candy study, Best and Horiuchi followed up on media accounts to confirm cases of actual poisoning or serious injury, and they found many cases couldn’t be confirmed or were greatly exaggerated. So, I followed the data on detergent digestion.

It turns out, there is a small trend. According to a report from the American Association of Poison Control Centers,

That said, this trend is only relative to previous years and cannot predict future incidents. The life cycle of internet jokes is fairly short, rotating quickly with an eye toward the attention economy. It wouldn’t be too surprising if people moved on from the pods long before the panic dies out.

I think the trend has more to do with kids making videos of them trying it for the sake of becoming an internet sensation than kids trying it because they think it'll taste good. Not much of a distinction given the end result is the same but it changes how you go about resolving the problem I think.

I would be interested if there's any research or data on the whole concept of internet challenges in general, now that challenge videos on youtube have almost become a genre in and of themselves (ex: ghost pepper challenge, Ice bucket challenge, etc -- many more listed here: https://turbofuture.com/internet/10-YouTube-Challenges-You-Cant-Miss). I found an article discussing the phenomenon, but not much luck finding any kind of more formal study on the topic... https://nypost.com/2016/11/16/why-simple-videos-like-the-mannequin-challenge-go-viral/