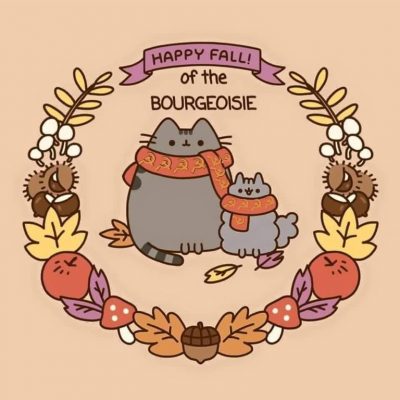 When I first encountered the subreddit me_irl it was, in general, about two things: anxiety and communism. I hit the subscribe button so fast I sprained my finger. Since then, me_irl has changed a bit, though anxiety and communism are still central topics. But over the last year or so, the sub has become a bit more… meme-ey. Or may may-ey, depending on your dialect. Me_irl has increasingly consolidated around short-lived memes, and in June /u/thoompa noticed that memes had a shelf life of approximately one month. Thus was born the “meme of the month” idea, and all through September some great memes lived high on the hog, getting large numbers of upvotes and creating a self-referential circle jerk that gave new texture to the sub. 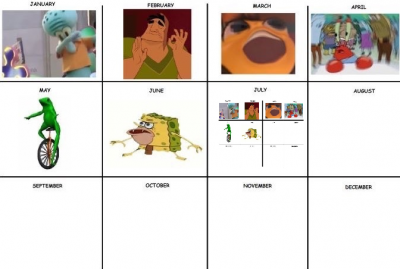 But then, tragedy struck. For the first six days in October, no memes rose to preeminence. It became known as the Great Meme Drought of October, when chaos reigned and dankness was few and far between. Some users tried to prop up The Bear In The Big Blue House as the new MotM, but others saw this as farce, for that meme was not fresh enough. Then, the skeletons arrived, thus sparking the Great Meme Civil War of 2016. 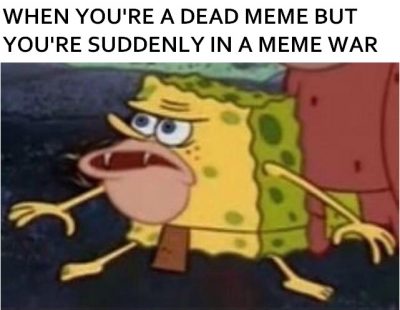 But out of this chaos, a curious thing happened. A deluge of memes flooded me_irl. One day, it was Goosebumps, the next The Crusade and trebuchets, then Bionicle and Ken Bone and on and on. A new meme came to power each day, mirroring the instability that has followed civil wars throughout history. Some found it frustrating—they couldn’t keep up, the memes were changing too rapidly. Some said they were low-quality Facebook memes. But others heralded it as The October Meme Renaissance of 2016. 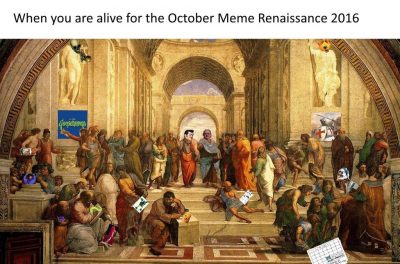 What fascinates me most about the turmoil in me_irl the last two weeks is not the memes themselves, though many of them are dank. But it is the explanatory model that dominated discussions about the Meme Renaissance that deserves attention here. The prevailing metaphor used to explain the rapid change of popular memes is one that we often fall back on to explain complex phenomena under late capitalism: the market. Specifically, the “rise and fall” or “instability” of memes is being couched in the metaphor of the stock market. Memers “invest” in Ken Bone or “sell off shares” in The Bear In The Big Blue House. They “diversify their portfolio” of memes to keep up with the constant changes happening in me_irl. /u/DryAsphalt has accused me_irl of ushering in “the biggest global meme crash and recession” in modern history.  It should be noted that this accusation was made on the new and rapidly growing subreddit MemeEconomy, created on September 28th and hitting 10,000 subscribers today.

MemeEconomy is a place for memers to sort out the disturbing questions that have arisen in the wake of me_irl’s Renaissance. /u/BaseballRJP writes:

The fact that we have become self aware of the market’s fluctuations and that we have started to question the relevancy of memes without blindly shitposting comes to show how much the meta has changed. Experts can’t tell if the market is booming, or crashing. Is there sustainable growth? Is this new meta going to last? Is this new meta even VIABLE? These questions make you wonder: is it time to regulate the market? I’m a firm believer in laissez memeire, but times have drastically changed. We say the freer the market the freer the people, but with all this pressure on the market are we truly free? It’s just a matter of time before the bubble pops. Right?

Two elements of the market metaphor’s role in the Renaissance are striking: First, the depth of metaphorical analysis is incredible. If you take some time to scroll through posts, you will find long theoretical discussions of the evolution and transformation of memes over time that use both the vocabulary of actually-existing market trade as well as new vocabulary mimicking the style of stock market lingo: NasDANQ, meme-broker, and a whole host of stock-style acronyms for memes (MRSK for Mr. Skeltal and 3S5M for 3spooky5me). The extent to which posts and comments are embedded in stock market discourse is remarkeable, even more so given that, as far as I can tell, the 4th wall is never broken.

Second is the parodic nature of the metaphor. The whole discourse is a wink and a nudge. If someone reading the posts had never heard of a meme it might seem entirely serious, and for someone who knows what a meme is but has no context of recent events it may be practically unintelligible. But the discourse is so self-aware and deftly performed that it reveals the absurdity of market metaphors at large.

We use the market as a metaphor for countless things under late capitalism: being “on the market” in dating, entering the “market of ideas,” competing for clicks and views in the “attention economy.” The free market is an “ideology” in Stuart Hall’s sense of the word; it is one of the “practical as well as theoretical knowledges which enable people to ‘figure out’ society” and understand their social position in it. The market has become an explanatory model for a wide variety of human experiences, structuring our understanding of the world in a way that would be impossible under a different economic system.

In Metaphors We Live By, George Lakoff and Mark Johnson argue that we think and communicate with metaphors at a deep cognitive level. Metaphors are not just a means of explanation or description. Rather, “human thought processes are largely metaphorical.” We “fall in love” and “offer our 2 cents;” we “buy in” and “sell out.”  The metaphors we use also reveal deep-seated cultural values and norms. As Lakoff and Johnson write, “cultural assumptions, values, and attitudes are not a conceptual overlay which we may or may not place upon experience as we choose. It would be more correct to say that all experience is cultural through and through, that we experience our ‘world’ in such a way that our culture is already present in the very experience itself.”

It has taken me an embarrassingly enormous amount of time and attention to understanding exactly what’s been happening on me_irl over the last few weeks. And while the stock market metaphor isn’t explanatory for the Renaissance as a social phenomenon—an explanation I have sought but not quite found—it does have its own explanatory power. What is “investment” in a meme economy? It’s mostly time: time spent making content, keeping up with trends, scrolling through posts and upvoting or downvoting based not only on personal preference but on one’s knowledge of what is current. The market metaphor doesn’t explain why me_irl went off the rails this month, but it does offer some scaffolding for understanding the current state of meme affairs.

I argued earlier that the market metaphor in this context is parody, but that’s only partly true. It does seem to also contain a genuine attempt to understand the recent events summarized here, as well as the strange and complex ways that memes circulate more generally. It’s revealing that after a decade of rehashing the 2008 housing market collapse, the recession, and the fear of the impending student loan collapse and instability to come, the “meme market” is being described in terms of “bubbles” and “busts,” of “buying shares in Mr. Skeltal” and Pepe being a stable investment despite his recent fall from grace. We’re enveloped in the discourse of the market. It is a key ideological tool that we use to explain things that we cannot understand. It is a metaphor that we live by. Personally, I find that a bit spoopy.

This looks like a further iteration of the Rare Pepe boom and bust of last year [ http://knowyourmeme.com/memes/rare-pepe ]. Before Pepe the Frog became so mainstream as to be registered as a hate symbol, it was a yet only a sometimes used meme. Way back in 2014, it was mostly seen on 4chan and rarely reddit. Then, when it started to grow in popularity, people started claiming to have "Rare Pepes" of great memetic power. These valuable Pepes were theoretically traded for money by people who dealt in memes.

Then someone dropped a huge image gallery of Pepes, effectively flooding the market and crashing the value of the Pepe meme.

The upshot with respect to me_irl, which I'll admit I haven't paid that much attention to, is that market corrections happen. When something is overvalued (or undervalued), be it rare Pepes or the attention of the viewers of me_irl, there will be a jump or drop in the value.

My guess is that me_irl was undervaluing the collective mindshare of its viewers which lead to the Rennaisance. It might be interesting to see if it gained a lot of new subscribers over the last few months. An influx of members might be seen as an increase in the the 'volume' of the market, meaning there was a lot more interest, and value, than was represented in the me_irl posts. Eventually this increased mind-share turned into content, producing a new generation of dank memes.

This could partially explain why the content changed over the last year and also what could have been fueling the Rennaisance.