This weekend I was at the annual conference for the Society for the Scientific Study of Religion, where they held a memorial for sociologist Peter Berger. I thought of Berger and Luckmann’s classic The Social Construction of Reality in the airport on the way home. Whenever people say ritual is dying out, or socially constructed things “aren’t real,” I think of airport lines. 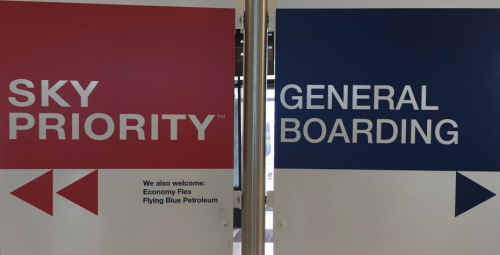 There are always two lines, but rarely any separation other than a sign like this. If you’re lucky, you can catch the gate agent making a big show of opening the “general boarding” lane, but everyone ends up at the same scanner right past the sign (usually only a minute or two after the “elite” passengers). From Berger and Luckmann (the Anchor Books paperback edition):

The developing human being not only interrelates with a particular natural environment, but with a specific cultural and social order which is mediated to him by the significant others who have charge of him (p. 48).

The symbolic universe orders and thereby legitimates everyday roles, priorities, and operating procedures…even the most trivial transactions of everyday life may come to be imbued with profound significance (p. 99).

Thank you for sharing good information about Airport Ritual. I think this information will be very helpful to people, especially travelers. Nowadays, travel has become very difficult during the Corona period which has resulted in many people preferring to travel but not being able to travel. But there are many means by which you can still travel, the easiest and safest way is a party bus tour. Currently, you can travel in the safest way by party bus. On the party bus, you can travel with your family and friends. I have received a party bus service from many companies and I like the service from www.partybusoflasvegas.com this luxurious party bus services company, who offers Las Vegas party buses with 20-passenger couch seating and a fully equipped entertainment unit perfect for private parties. So I would recommend people to take a look at their service. Have a Good Day!