Research Finds Obesity is in the Eye of the Beholder

In an era of body positivity, more people are noting the way American culture stigmatizes obesity and discriminates by weight. One challenge for studying this inequality is that a common measure for obesity—Body Mass Index (BMI), a ratio of height to weight—has been criticized for ignoring important variation in healthy bodies. Plus, the basis for weight discrimination is what other people see as “too fat,” and that’s a standard with a lot of variation.

Recent research in Sociological Science from Vida Maralani and Douglas McKee gives us a picture of how the relationship between obesity and inequality changes with social context. Using data from the National Longitudinal Surveys of Youth (NLSY), Maralani and McKee measure BMI in two cohorts, one in 1981 and one in 2003. They then look at social outcomes seven years later, including wages, the probability of a person being married, and total family income.

The figure below shows their findings for BMI and 2010 wages for each group in the study. The dotted lines show the same relationships from 1988 for comparison. 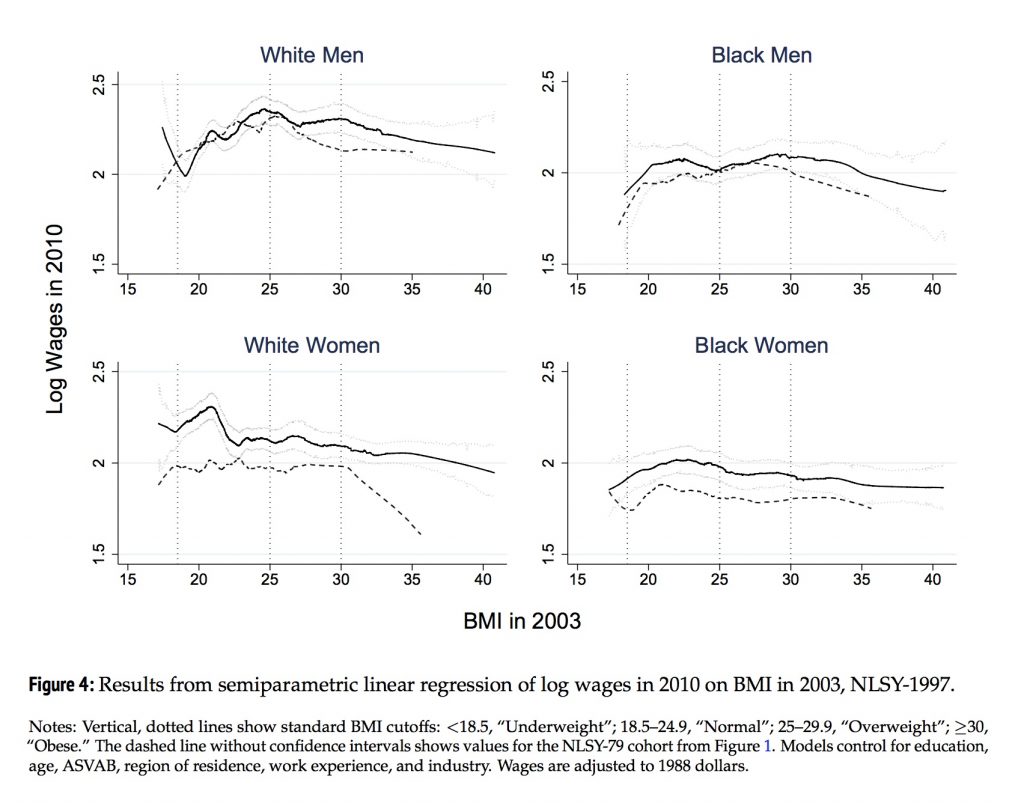 For White and Black men, wages actually go up as their BMI increases from the “Underweight” to “Normal” ranges, then levels off and slowly decline as they cross into the “Obese” range. This pattern is fairly similar to 1988, but check out the “White Women” graph in the lower left quadrant. In 1988, the authors find a sharp “obesity penalty” in which women over a BMI of 30 reported a steady decline in wages. By 2010, this has largely leveled off, but wage inequality didn’t go away. Instead, that spike near the beginning of the graph suggests people perceived as skinny started earning more. The authors write:

The results suggest that perceptions of body size may have changed across cohorts differently by race and gender in ways that are consistent with a normalizing of corpulence for black men and women, a reinforcement of thin beauty ideals for white women, and a status quo of a midrange body size that is neither too thin nor too large for white men (pgs. 305-306).

This research brings back an important lesson about what sociologists mean when they say something is “socially constructed”—patterns in inequality can change and adapt over time as people change the way they interpret the world around them.

To my great regret, this is a very urgent problem, which is why I believe that it must be discussed. There is a good article https://schimiggy.com/how-to-prevent-obesity/ about obesity prevention and I can safely say it is very well written. More attention to this in order to eradicate this problem as much as possible. I believe that we will succeed and wish each of you good luck!