One of the big themes in social theory is rationalization—the idea that people use institutions, routines, and other formal systems to make social interaction more efficient, but also less flexible and spontaneous. Max Weber famously wrote about bureaucracy, especially how even the most charismatic or creative individuals would eventually come to rely on stable routines. More recent works highlight just how much depend on rationalization in government, at work, and in pop culture.

With new tools in data analysis, we can see rationalization at work. Integrative Biology professor Claus Wilke (@ClausWilke) recently looked at a database of movies from IMDB since 1920. His figure (called a joyplot) lets us compare distributions of movie run times and see how they have changed over the years. 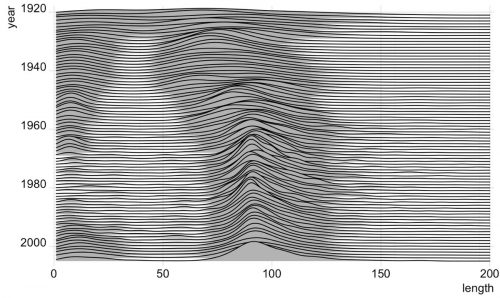 While older films had much more variation in length, we can see a clear pattern emerge where most movies now come in just shy of 100 minutes, and a small portion of short films stick to under 30. The mass market movie routine has clearly come to dominate as more films stick to a common structure.

What’s most interesting to me is not just these two peaks, but that we can also see the disappearance and return of short films between 1980 and 2010 and the some smoothing of the main distribution after 2000. Weber thought that new charismatic ideas could arise to challenge the rationalized status quo, even if those ideas would eventually become routines themselves. With the rise of online distribution for independent films, we may be in the middle of a new wave in charismatic cinema.

Did short films really crater out between 1980 and 2000, or are they simply missing from the data set for other reasons?

While the database quite extensively accounts for theatrically released features, it's quite inconsistent when it comes to short films. The IMDB has only existed since 1990, and it wasn't until closer to 2000 (post the Amazon purchase) that new entries for short films and individual television episodes were commonplace. The more recent a production is, the more incentive there would be for someone to create an entry for it; the data set for 1980-1990 is far less comprehensive than that for 2017.

I'd be interested in what the criteria were for what constitutes a "film," since the period covered here encompasses the rise of television, digital, streaming video, etc. - all of which are covered by IMDB to varying degrees. Is a film that isn't logged on IMDB not a film at all?

I love watching TV online, Mobdro TV is my current choice for watching movies, sports and many other genres.

I like to watch old movies. The movies mean a lot. Sometimes, it is played in the Mobdro PC application

Mobdro APK is app that provide live TV channels with full HD result on your device. You can dwonload mobdro apk app and enjoy all tv chanels.

Mobdro APK is app that provide live TV channels with full HD result on your device. You can dwonload mobdro apk app and enjoy all tv chanels.