Monica C. sent along images of a pamphlet, from 1920, warning soldiers of the dangers of sexually transmitted infections (STIs). In the lower right hand corner (close up below), the text warns that “most” “prostitutes (whores) and easy women” “are diseased.” In contrast, in the upper left corner, we see imagery of the pure woman that a man’s good behavior is designed to protect (also below).  “For the sake of your family,” it reads, “learn the truth about venereal diseases.”

The contrast, between those women who give men STIs (prostitutes and easy women) and those who receive them from men (wives) is a reproduction of the virgin/whore dichotomy (women come in only two kinds: good, pure, and worthy of respect and bad, dirty, and deserving of abuse).  It also does a great job of making invisible the fact that women with an STI likely got it from a man and women who have an STI, regardless of how they got one, can give it away.  The men’s role in all this, that is, is erased in favor of demonizing “bad” girls. 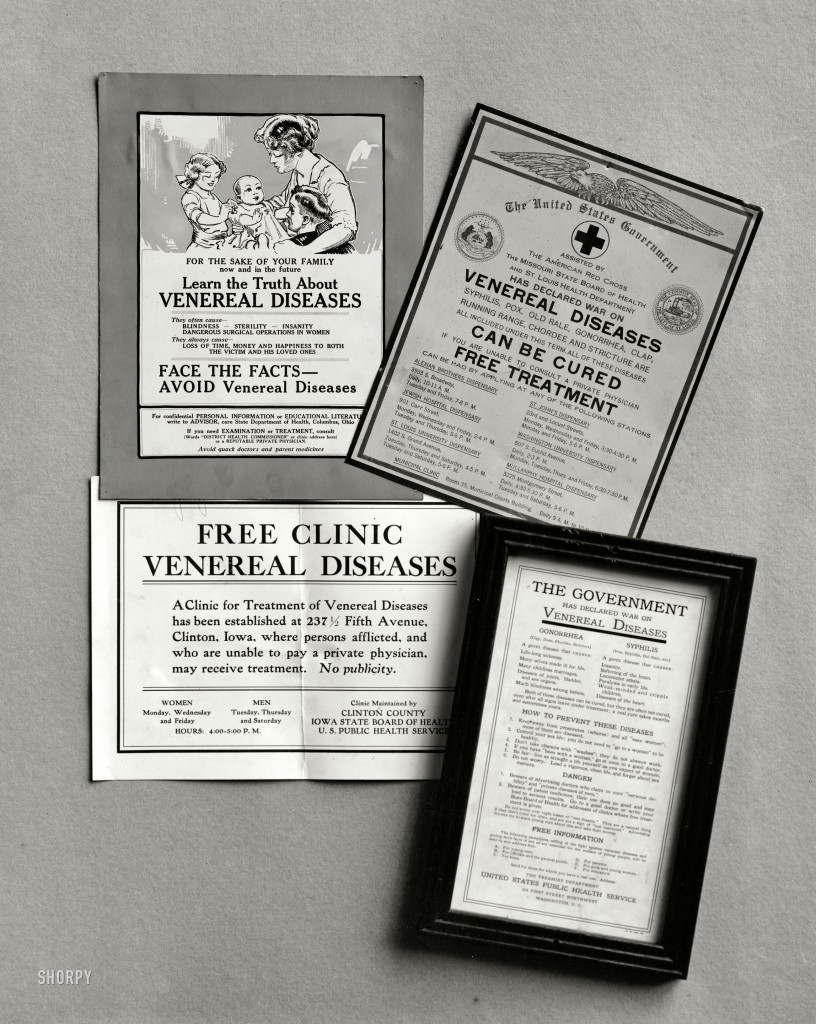 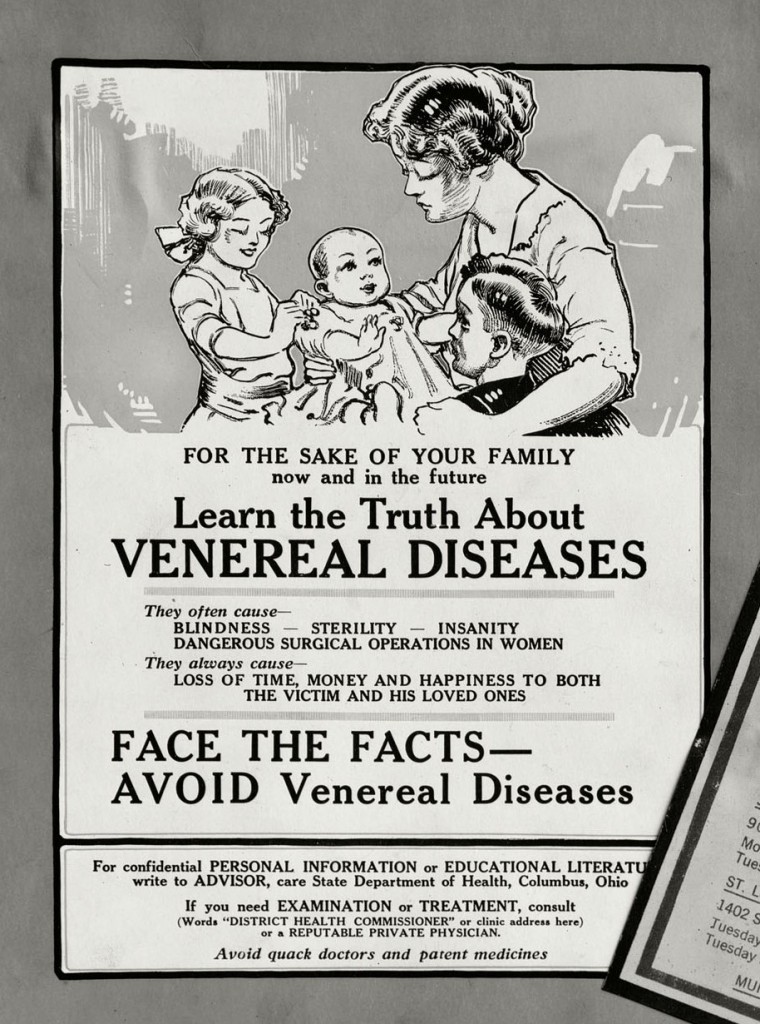 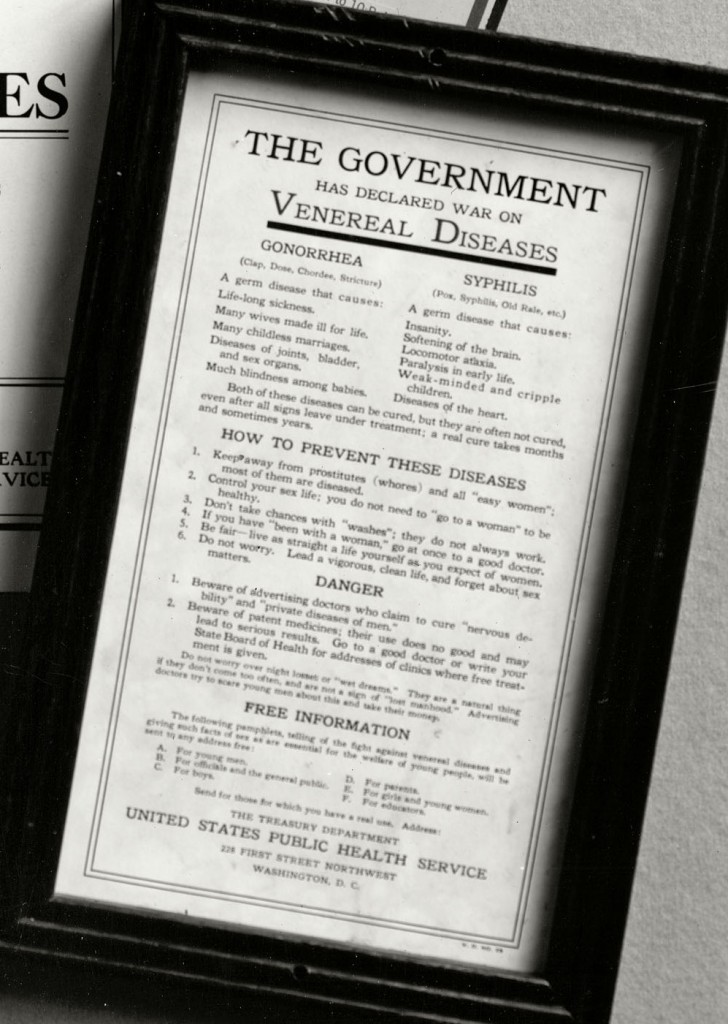 See also these great examples of the demonization of the “good time Charlotte” during World War II (skull faces and all) and follow this post to a 1917 film urging Canadian soldiers to refrain from sex with prostitutes (no antibiotics back then, you know).

That last image is also a great example of America's puzzling history of declaring "War" on nouns. We all know about Drugs and Terror, but the War on VD is a new one to me; this tendency goes back a lot further than I'd thought!

This bit jumped out at me:

"They always cause loss of time, money and happiness to both the victim and his loved ones"

So in this view, a man gets a disease from a dirty woman and gives it to a clean woman - but the victim in this situation is the man. Whut?

Wow, the text in the "war on VD" image is amazing.

One of the ways to prevent VD is "5. Be fair - live as straight a life yourself as you expect of women." But apparently they only expect a straight life from good women, since they are sleeping with the bad ones. Yet another example of what the post was talking about.

Small print under Danger: "Do not worry about night [unclear] or 'wet dreams.' They are a natural thing if they don't come too often, and are not a sign of 'lost manhood. Advertising doctors try to scare young men about this and take their money." I don't have much history on early century men's sexual health, but what in the world were advertising doctors trying to sell to stop wet dreams?

It also does a great job of making invisible the fact that women with an STI likely got it from a man and women who have an STI, regardless of how they got one, can give it away.

emphasis mine, 'cause i'm having cognitive fail and can't figure out what you mean. is this a typo? it seems to me that these ads are all about how women with an STI "can give it away" -- there's nothing invisible about it.

Too bad nothing's changed. Women are supposed to get invasive, expensive medical attention (annual pelvics, etc.), whereas dudes just skip along, gleefully fucking, until their dick rots off. And then they got it from a dirty slut!

I guess it's just more Eve shit. Fallen women and suffering and all.

I am in the middle of writing my dissertation on VD in WWII Britain. In Britain anyway the traditional libertine figure had by WWII been discredited and the prostitutes he frequented had stopped being so much of an official concern (they were professionals who knew about prophylaxis). Social anxiety had moved onto young girls being enticed by exotic African-American GI's stationed in Britain instead! Demobilised soldiers returning home, and men who had stayed at home, were also starting to shoulder more of the blame for infecting their wives and children.

It's interesting to see different countries try to deal with VD, 'making vice safe', the moral double standard and public health issues, and how it is all influenced by the gender norms of the period.

I have noticed a difference in WPA era posters and WWII posters. The WPA ones do focus more on the idea that STIs can affect your family - which I don't see as a bad thing. Abstinence-only campaigns should recognize that marriage doesn't always protect against STIs.

Here are the images I've found, compared to the slut-shaming ones from WWII:

I honestly don't get posts like this. Are we supposed to feel angry, sad, helpless, motivated? Just how are we supposed to feel? These pictures are no indication of how things are today, since they are ninety years old. This certainly isn't supposed to be a retrospective since Lisa never answerer the question of *why* in a historical context. She's looking at it from the bias of our own time. She doesn't consider the social factors back then, or the state of VD's in that time. She is comparing these images to... something. I don't understand what that is. If she did want to look at the current era virgin/whore dichotomy, then why not make commentary on a current issue? Or relate this to a current issue? This post seems intent to stir up emotion without having much intellectual value.

Is it weird that I'm most surprised by the statement that men should "be fair--live a straight life yourself as you would expect of women"? I mean, seriously, how often do we hear that, even today?

Did someone point out that the motivation for these pamphlets were often soldiers who were--almost exclusively--men and the point was to avoid disease which--at the time--was often more lethal and disabling to military power than enemy bullets?

In this case, trying to provide a palatable reason understandable by most troops (which, at the time, often had only a grade-school education) might promote this perception, especially when geographically separated from whom they might consider making their wife. (I.e. the woman at home or from home, far away.)

Additionally, training films about operational security often linked "loose women" to spying. This combination--oriented at soldiers far from home and away from "wifable women"--again might have been seen as effective at putting physical distance to match social distance between soldiers and local women as well with the motivation of "force protection". Demonization--in this case--serves a purpose without alienating men from the "woman at home" by differentiating the two.