Western Corporations and the Cultivation of Colorism in India

Previously marketed to women, skin lightening, bleaching, and “fairness” creams are being newly marketed to men.  The introduction of a Facebook application has triggered a wave of commentary among American journalists and bloggers.  The application, launched by Vaseline and aimed at men in India, smoothes out blotches and lightens the overall skin color of your profile photo, allowing men to present a more “radiant” face to their friends. 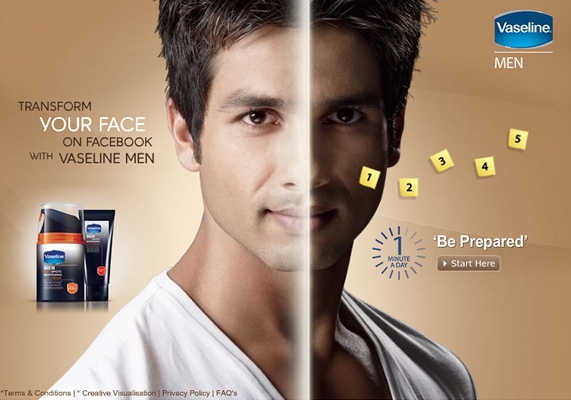 The U.S. commentary involves a great deal of hand-wringing over Indian preference for light skin and the lengths to which even men will go to get a few shades lighter.  Indians, it is claimed, have a preference for light skin because skin color and caste are connected in the Indian imagination.  Dating and career success, they say further, are linked to skin color.  Perhaps, these sources admit, colorism in India is related to British colonialism and the importation of a color-based hierarchy; but that was then and, today, India embraces prejudice against dark-skinned people, thereby creating a market for these unsavory products.

The obsession with light skin, however, cannot be solely blamed on insecure individuals or a now internalized colorism imported from elsewhere a long time ago.  Instead, a preference for white skin is being cultivated, today, by corporations seeking profit.  Sociologist Evelyn Nakano Glenn documents the global business of skin lightening in her article, Yearning for Lightness.  She argues that interest in the products is rising, especially in places where “…the influence of Western capitalism and culture are most prominent.”  The success of these products, then, “cannot be seen as simply a legacy of colonialism.”  Instead, it is being actively produced by giant multinational companies today.

The Facebook application is one example of this phenomenon.  It does not simply reflect an interest in lighter skin; it very deliberately tells users that they need to “be prepared” to make a first impression and makes it very clear that skin blotches and overall darkness is undesirable and smooth, light-colored skin is ideal.  Marketing for skin lightening products not only suggests that light skin is more attractive, it also links light skin to career success, overall upward mobility, and Westernization.  Some advertising, for example, overtly links dark skin with saris and unemployment for women, while linking light skin with Western clothes and a career.

The desire for light skin, then, isn’t an “Indian problem” for which they should be entirely blamed. It is being encouraged by corporations who stand to profit from color-based anxieties that are overtly tied to the supposed superiority of Western culture.  These corporations, it stands to be noted, are not Indian.  They are largely Western: L’Oreal and Unilever are two of the biggest companies.  The supposedly Indian preference for light skin, then, is being stoked and manufactured by companies based in countries populated primarily by light-skinned people.  As Glenn explains, “Such advertisements can be seen as not simply responding to a preexisting need but actually creating a need by depicting having dark skin as a painful and depressing experience.”

Before pitying Indian seekers of light-skin, condemning the nation for colorism, or gently shaking our heads over the legacies of colonialism, we should consider how ongoing Western cultural dominance (that is, racism and colorism in the West today) and capitalist economic penetration (that is, profit through the cultivation of insecurities around the world) contributes to the global market in skin lightening products.

Originally posted in 2010; crossposted at BlogHer.

Your link to that ad does not work.

How on earth is this different from all the marketing done in the US -- by the exact same companies -- insisting that skin-DARKENING is absolutely necessary for every white person, male or female? There are so many self-tanning products, tanning salons, etc. here that I'm not surprised those companies have branched out with the opposite tactic in other countries.

"The obsession with light skin, however, cannot be solely blamed on insecure individuals or a now internalized colorism imported from elsewhere a long time ago. Instead, a preference for white skin is being cultivated, today, by corporations seeking profit. Sociologist Evelyn Nakano Glenn documents the global business of skin lightening in her article, Yearning for Lightness. She argues that interest in the products is rising, especially in places where “…the influence of Western capitalism and culture are most prominent.” The success of these products, then, “cannot be seen as simply a legacy of colonialism.” Instead, it is being actively produced by giant multinational companies today."

Exactly what I've been saying the whole time. These corporations are also pushing unfair, unrealistic beauty standards and telling us that being fat, having cellulite, having a stomach gut, having wrinkles, having curly or "ruly" hair, having small boobs, having dark skin, etc etc etc, make us un-attractive. FUCK corporations, FUCK these bullshit corporate advertising. THEY are the ones who brainwash and feed garbage to young people, who in turn, will then pass down their garbage to future generations. Ugh, I feel sick.

You know, as a south Asian (Indian, to be specific) how much ever it's tempting to think that colonialism or present day market infiltration is mostly responsible for such "preferences," it's still mostly wrong. Even the god damned Rig Veda (est. to be around 1,500 yrs old) has plenty of references of "turmeric-hued," or "golden," and "radiant complexioned," mythological heroes and God(esse)s and have you ever heard of the thousand year-old pre-wedding tradition where saffron, milk and turmeric are applied on the bride to make her complexion more "radiant" (read: fair), or familiar with any ancient Indian/Hindu mythology or even Classical Sanskrit epics/poems who are literally littered with appraisals of turmeric-hued and sometimes green/hazel-eyed beauties/warriors?

I am not saying that colonialism did not agitate this, but preference for pale skin or at least, light/wheatish skin is unfortunately, deeply rooted in south Asian culture. The western companies, like any "good" companies are simply taking advantage of it.

As an aside, I must admit, I am even more interested in the white-Britons' and Americans' obsession with south Asians' obsession with light skin or even with their obsession with the amount Middle-Eastern/Jewish people who have nose jobs etc. etc. Can someone tell me seriously why are there so much news/blog-coverage over such things; is it a superiority complex (sub-conscious confirmation to them of the white is right trend?) or/and Mighty Whitey/Saviour behaviour, "Oh, it's so *sad* wants to be white (1), they should appreciate true (in this case) Indian beauty tm., (who can apparently only be very dark-skinned, dark-eyed and dark-haired, I've heard, even though millions of Indian/south Asian women are the complete opposite, including pasty-ass, blue-eyed, 110% Indian, me), or is it something altogether different?

Because, seriously the amount of new stories or blog posts, have been devoted to such practices, that I'm sure something's up. How many news articles do you see about the number white-Americans use of tanning booths or their use of lip-plumpers for fuller lips in Indian or Angolan magazines/blogs in comparison?

I first saw this ad campaign written about rather intelligently by Danah Boyd | apophenia. She relates this all to "cultural collisions."

I just wanted to point out how the image above has been manipulated to sell the idea that lighter skin is better.

This is analogous to the way American advertisements for anti-aging of weight-loss programs often feature a "before" picture in which the model has dowdy clothes, no make-up, or an unhappy facial expression. In the "after" picture, she's smiling, wearing flattering clothes, and glamorously made-up. Look how much prettier and happier she is, not that's she's completed her two months on THIN-SYSTEM!!!!

Putting the "dark" side of the skin-lightener model in shadow isn't quite as blatant, but it's the same kind of strategy.

It is my impression, based on photos, that the unscheduled castes people and tribal peoples of India tend on average to be darker than the average for higher-caste Indians. Is this correct? There's a lot of subdivisions in "low caste or non-caste", and possibly some genetic isolation (long-standing preference for marriage within a relatively small community), so I wouldn't be surprised if there was a very broad range between different sub-groups' average skin color. It wouldn't surprise me if colorism predates the British.

This is an excellent good conversation on the topic: http://www.npr.org/templates/story/story.php?storyId=106419771

At least they used a model who actually LOOKS Indian... Here in China (And the rest of East Asia), the whitening creams are still mainly sold to women. Even so, they usually feature a white/half white model whose skin will magically get lighter the second the product's name is anounced. She doesn't even move, and her whole body will go from "light" to "ivory" in about 2 seconds. And the companies behind this are the same ones who make self-tanner in the US and other "Western" countries. I'm talking Ponds, Garnier, Dove, Nivea, etcetc.

Does anyone else find the author's complete disregard for (or ignorance of) the ancient caste system of India odd? One of the earliest systems divided society into varnas based on color, with the white caste at the top of society and the black near the bottom (at this point untouchables were not assigned a color, being 'below varna,' but untouchables were invariably dark-skinned). This system was said to be instated by Aryan (Indo-Iranian, not German) invaders, but its important to note that it predates British colonialism like woah.

So while colorism may not be completely native to India, it certainly was not introduced by 'the West.' Though the caste system is now abolished in India its influence persists, evidenced in part by the continuing prejudice towards untouchables. I think its a gross oversimplification to attribute modern colorism to western influence, colonial or corporate.

According to Business Wire, in 2003:
Ten percent of Americans spend on average $300 per year to tan indoors.This equates to a total US market for tanning of over $9 billion per year, and does not include the $3 billion tanning products market"