The Most Trustful Societies are Weakly Religious and Diverse

We often think that religion helps to build a strong society, in part because it gives people a shared set of beliefs that fosters trust. When you know what your neighbors think about right and wrong, it is easier to assume they are trustworthy people. The problem is that this logic focuses on trustworthy individuals, while social scientists often think about the relationship between religion and trust in terms of social structure and context.

New research from David Olson and Miao Li (using data from the World Values survey) examines the trust levels of 77,405 individuals from 69 countries collected between 1999 and 2010. The authors’ analysis focuses on a simple survey question about whether respondents felt they could, in general, trust other people. The authors were especially interested in how religiosity at the national level affected this trust, measuring it in two ways: the percentage of the population that regularly attended religious services and the level of religious diversity in the nation. 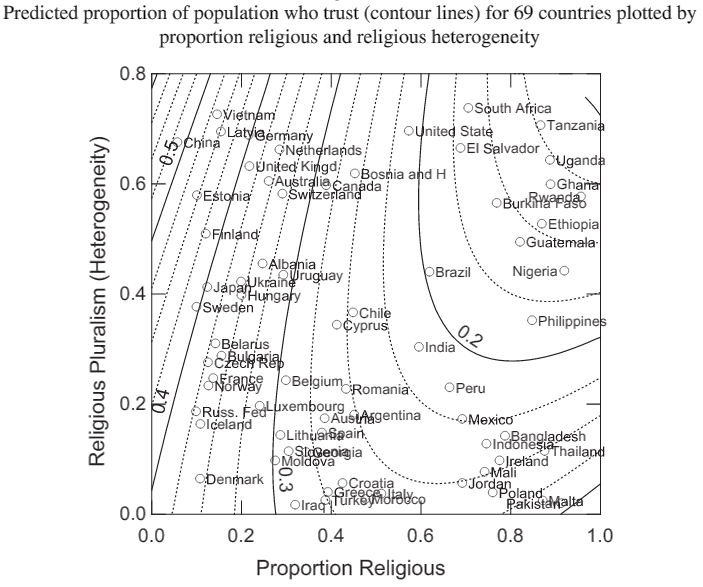 One possible explanation for these two findings is that it is harder to navigate competing claims about truth and moral authority in a society when the stakes are high and everyone cares a lot about the answers, but also much easier to learn to trust others when living in a diverse society where the stakes for that difference are low. The most important lesson from this work, however, may be that the positive effects we usually attribute to cultural systems like religion are not guaranteed; things can turn out quite differently depending on the way religion is embedded in social context.

Evan Stewart is a PhD candidate at the University of Minnesota studying political culture. He is also a member of The Society Pages’ graduate student board. There, he writes for the blog Discoveries, where this post originally appeared. You can follow him on Twitter.

Groupthink is heavily involved here - many people believe others who share their religious values are trustworthy, and those who don't are not. Sadly, in my past experiences as a victim advocate, time and time again I saw people who were shocked to death when they (or their children) were victimized by someone who shared their faith. Also, what better way to draw people to your message than to convince them to be frightened of those who are not?

I'm curious how much "religiosity" here could stand in for other types of ideology. Is there a similar correlation between trust and political ideology (for example)?

How is religion defined here? What makes it different from other forms of ideology or other civil or political institutions??

[…] An interesting and parallel story from Sociological Images: […]

That graph is confusing.

Look at where they put Iraq - almost completely homogenous! They probably said "most Iraqis are muslim" and called it a day. Fail.

The GTA title is set in Liberty City, Los Santos. It will take place around the time after 9/11, but before any terror attacks. The story focuses on several characters that have their own stories. In addition, there are also three main storylines that you must complete for each character to progress throughout the game. A lot of things happen in the first level of the game. These include some dramatic events including car chases, robberies, and fights against other players.
Download: Grand Theft Auto V Premium Edition