Five Reasons Why Gendered Products are a Problem

Our Pointlessly Gendered Products Pinterest board is funny, no doubt. When people make male and female versions of things like eggs, dog shampoo, and pickles, you can’t help but laugh. But, of course, not it’s not just funny. Here are five reasons why.

Generally speaking, men and women today live extraordinarily similar lives. We grow up together, go to the same schools, and have the same jobs. Outside of dating — for some of us — and making babies, gender really isn’t that important in our real, actual, daily lives.

These products are a backlash against this idea, reminding us constantly that gender is important, that it really, really matters if you’re male and female when, in fact, that’s rarely the case. 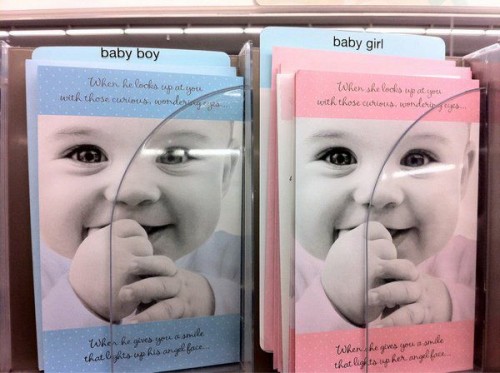 But if there were no gender difference, there couldn’t be gender inequality; one group can’t be widely believed to be superior to the other unless there’s an Other. Hence, #1 is important for #3.

Affirming the gender binary also makes everyone who doesn’t fit into it invisible or problematic. This is, essentially, all of us. Obviously it’s a big problem for people who don’t identify as male or female or for those whose bodies don’t conform to their identity, but it’s a problem for the rest of us, too. Almost every single one of us takes significant steps every day to try to fit into this binary: what we eat, whether and how we exercise, what we wear, what we put on our faces, how we move and talk. All these things are gendered and when we do them in gendered ways we are forcing ourselves to conform to the binary.

Pointlessly gendering products isn’t just about splitting us into two groups, it’s also about telling us what it means to be in one of those boxes. Each of these products is an opportunity to remind us. 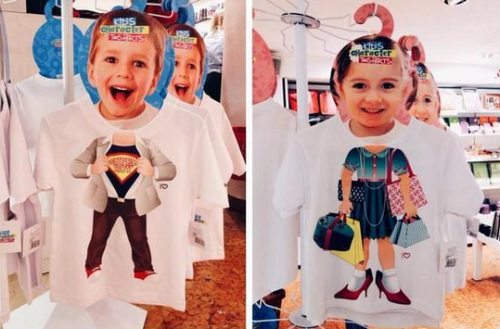 3. Pointlessly gendered products tell us explicitly that women should be subordinate to or dependent on men.

All too often, gender stereotypes are not just about difference, they’re about inequality. The products below don’t just affirm a gender binary and fill it with nonsense, they tell us in no uncertain terms that women and men are expected to play unequal roles in our society.

Girls are nurses, men are doctors:

Girls are princesses, men are kings: 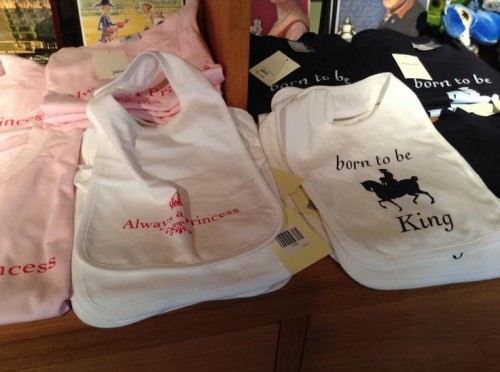 Sometimes the masculine and feminine version of a product are not priced the same. When that happens, the one for women is usually the more expensive one. If women aren’t paying attention — or if it matters to them to have the “right” product — they end up shelling out more money.  Studies by the state of California, the University of Central Florida, and Consumer Reports all find that women pay more. In California, women spent the equivalent of $2,044 more a year (the study was done in 1996, so I used an inflation calculator).

This isn’t just something to get mad about. This is real money. It’s feeding your kids, tuition at a community college, or a really nice vacation. When women are charged more it harms our ability to support ourselves or lowers our quality of life.

5. Pointlessly gendered products are stupid. There are better ways to deliver what people really need.

One of the most common excuses for such products is that men and women are different, but most of the time they’re using gender as a measure of some other variable. In practice, it would be smarter and more efficient to just use the variable itself.

For example, many pointlessly gendered products advertise that the one for women is smaller and, thus, a better fit for women. The packaging on these ear buds, sent in by LaRonda M., makes this argument. 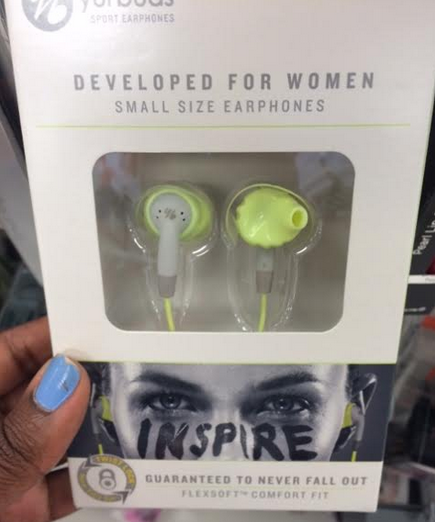 Maybe some women would appreciate smaller earbuds, but it would still be much more straightforward to make ear buds in different sizes and let the user decide which one they wanted to use.

Products like these make smaller men and larger women invisible. They also potentially make them feel bad or constrain their choices. When the imperative for women is to be small and dainty, how do women who don’t use smaller earbuds feel?  Or, maybe the small guy who wants to learn how to play guitar never will because men’s guitars don’t fit him and he won’t be caught dead playing this: 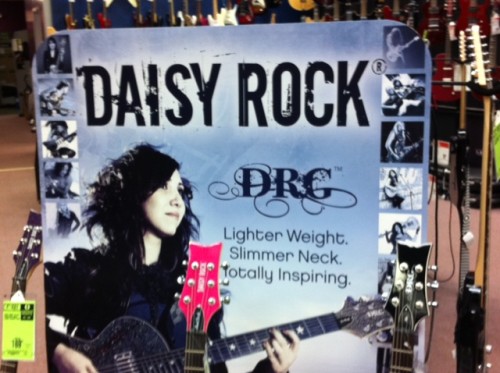 In sum, pointlessly gendered products aren’t just a gag. They’re a ubiquitous and aggressive ideological force, shaping how we think, what we do, and how much money we have. Let’s keep laughing, but let’s not forget that it’s serious business, too.

Why would gender matter for making babies? Or are you trying to say that a man can't have a uterus?

I'd guess most people would agree with at least a couple of your points, but a) you rarely offer solutions to these phenomena and that's just...well, no solution, and b) your last comment, i.e. that these products represent a "ubiquitous and aggressive ideological force" borders on the ludicrous.

People do no invest money to develop and market products with the goal of affirming the status quo. They do so to make money from people who voluntarily buy their products instead of others. Some succeed. Some fail. And it appears that products which are specifically tweaked to appeal to gender still do pretty well.

Also, do not forget that the most successful "pointlessly gendered products" of all time are clothes. I'll bet you I could open any closet door in America and tell you whether it was stocked by a male or female in 3 seconds or less, 99% of the time. You don't need kids toys to make your point; just go after virtually every clothing store in the world.

Bottom line: People like to differentiate themselves in pubic by their gender. Let's move on.

I was just thinking about this while cruising the Darkhorse Hellboy merchandise site. The average price for a men's shirt is $17.99. The same shirt, cut for a woman, is $24.99. They are charging more for less fabric. Yes. That makes sense. I would just buy a men's, but they don't have a small and I'd be swimming in a medium. The ovary tax strikes again.
https://www.darkhorse.com/Hellboy/Products/?page=1

Five Reasons Why Pointlessly Gendered Products are a Problem - Treat Them Better — January 20, 2015

[…] Five Reasons Why Pointlessly Gendered Products are a Problem […]

[…] Closing: fair housing and Ferguson; sensible; pointlessly gendered; 100 students; not a bad simplified explanation of how viruses work; the boy who rode his bike; and […]

and interesting thing on the guitars.
yes, they have a smaller scale, slimmer neck, lighter, more ergonomic shape etc.
this is all pretty good if you're an average sized female.
I have a Gibson SG. it has all those things going for it too, and it's not gendered.
I also noticed that it is popular with a lot of smaller built male guitarists, like Brian Molko and Kelly Jones, who are both within about an inch of my own height.
the Daisy Rock guitars are quite nice guitars when you see them, in lots of fun shapes and colours too. but the marketing really put me off them, as it sort of implied that as a female, a normal guitar is just too much for poor little me.
they did seem very geared towards younger guitarists, who are physically a bit small for some guitars, and if they'd not hammered home the girl angle so hard, that would have been much better, I think.
after all, a lot of people who are old enough not to be starting out on a scaled down guitar DO struggle a bit with most beginners guitars, as they are usually based on a Stratocaster model, and Fenders do require more stretch in your hands than a Gibson does. if more beginners guitars were based on Gibson models over Fender models, that would be another approach to the issue of being a bit smaller than most guitars are aimed at.

I fully support the need for stopping gender equality but I feel there is more emphasis on women than men. As I say I do support your argument on how ridiculous retail can be. Please look the next time you go into shops how large the female section is in comparison to the male section and also the selection and size range women have in comparison to men I have met countless men who struggle with jeans and trousers they have to get a bigger waist size in order to fit their legs. Looking at television adverts(commercials) in the uk if you look closely at it if there's a male and female in it the majority of the time the male looks inferior in regards to knowledge making it unequal but within this article it doesnt appear to say much on the male side it tends to focus more on the female side.

[…] Five reasons why gendered products are a problem. […]

So what is the point of pointlessly gendered products? Why are they so flippin popular?

Maybe its *because* otherwise we live so similarly, we like being reminded of the difference?

Here's another weird one to add to the pile:
http://www.resmed.com/us/en/consumer/products/resmed-product-series/choices-for-her.html

Sleep devices for treating sleep apnea..for women. It's more common among men, so apparently they need to make it pretty for women to use? The machine is no different from the regular model, just an ugly pink. They have slightly modified headgear -- also an ugly pink -- that apparently accommodates for a ponytail (who wears that to bed?). Useless.

Save on Valentine's Day gifts, up to 68% off women's handbags and more.
SHOP HERE ==>>LV-Online Outlet

[…] post. It rolls around every now and then, often from different sources. Usually it’s just some annoying feminist website. This time it was Cracked.com…which is sad, because Cracked […]

So a smooth, undifferentiated, homogenized, one-flavor world is the ideal?

do you know anything about music? i mean, usually i read yr articles because they are so absurd, so full of confirmation bias, that they would be—& are—ridiculously laughable were you not writing textbooks. the writing textbooks business [meaning: teaching the next generation{s} how to have confirmation bias, read statistics and design surveys to get exactly the response you want, etc & ect] has turned all of this website's gunk from preposterous to terrifying.

anyway, back to the subject at hand. have you ever seen a guitar player? ever? in yr whole life? because teeny tiny people play great big, man size guitars. there isnt a serious guitarist in the world who would play something like that. i cant even tell who made it. daisy rock? who in the forkity fork fork fork has heard of that?

one of the grandest, & most common, properties of this column is its propensity to declare itself [&, obviously, its typist] knowledgeable about every sort of thing in the world about which that typist knows nothing. the size of a guitar has never deterred a serious guitar player from playing a guitar.

Please avoid using ableist terms like "stupid" in your articles. Disabled people are tired of being the cultural go-to reference for things that suck.

[…] and sections of papers specifically targeted at women. But it’s odd that this interest has been gendered over the years. After all, it’s based on a thought that applies to people in general. Nowadays, […]

I think that this topic is quite acute social and relevant in our time. Girls and boys in families with similar living conditions are brought up completely differently. It is logical that both toys and school supplies and clothes for girls and boys are gendered. This can seriously affect the psyche of children and adolescents. Parents should pay attention to this issue and study gender theory better.