Daisy Rock Guitars: Why Size is a Better Measure than Sex

Victoria and Paul (a sociologist from the University of Turku, Finland) sent in an ad for a woman’s guitar that nicely illustrates the way that we unnecessarily gender size difference.  The Daisy Rock ad specifies that the guitar is “lighter weight,” with a “slimmer neck,” and designed exclusively for women: 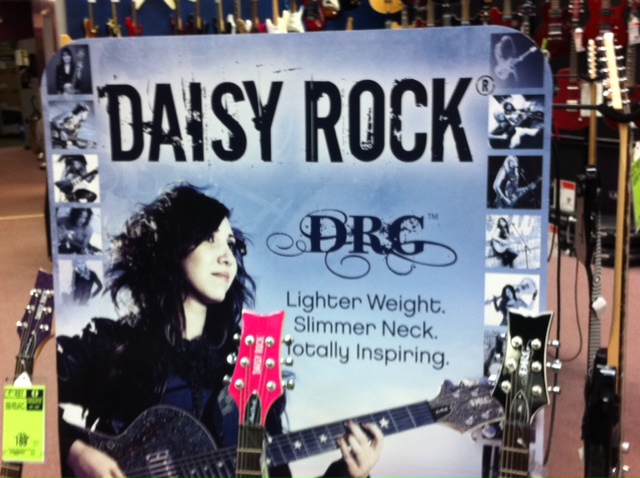 On the one hand, this guitar may be great for women who are on the smaller side.  In that sense, a smaller guitar may make it easier for more women to play guitar.

On the other hand, size is only related to gender, it’s not synonymous with gender.  There are women who are built in such a way as to make a traditional guitar perfect.  And there are men on the smaller side who may also benefit from a guitar built for slighter frames. The mistake is to suggest that small = female and large = male.  In contrast to this girl-only company, one that simply offered guitars in different sizes would be embracing of both women and the 1/2 of guys on the smaller side of the bell curve.

and, presumably, like the bar on the bike, the size has no difference to the sound?

Once I went to the giant music convention NAMM in Anaheim. I was a female guitar player, age 19, and happened to be in a band that was all-female. Everyone was pushing me to look at the Daisy Rock guitars but I couldn't stand them. They were all pink and sparkly with flowers and stuff. While these guitars might be good for some people, I was nauseated by the idea of playing a guitar that was JUST for girls. I actually would be stoked on a sparkly guitar, but not one that looked like it was for a 12 year old girl.

I've been to the NAMM show several times, and I've always gotten the impression that Daisy Rock is marketing to teen/preteen girls, not adult female musicians. Specifically, they're marketing to teen-preteen girls who are (kind of understandably) turned off by the male-centric rock & roll mythos. Sure, there are 15-year-old female punk guitarists who shred pretty happily on a Strat, but it's nice for young female musicians to get the message that the old brown acoustic guitar isn't their only other option.

As another female guitarist, I too dislike the Daisy Rock Guitars. For one thing, they sound like shit. Seriously, ask anyone who's tried to play one. Also, the idea that you need a guitar to be specifically made for women is just ridiculous because any guitar made for shredding has thin necks and my ibanez is even silver and sparkly. As for a lighter one, there are plenty of guitars out there that are marketed as light weight, or you can just look around and try out new ones. My belief has always been that for the most part, unless your hand are super tiny, there is no reason why you can't play a "regular" guitar, because everyone has trouble stretching to certain notes to begin with and to think that you can't play simply because your hands are too "small and girly" has far more to do with the fact that we see guitars, especially electric guitars, as a male instrument.
Haha, I guess that's the end of my rant. I get really passionate about this, being one of only two girls in the guitar program at my college.

I was interested, in investigating a bike pump my mom wanted for her birthday (the Bontrager TurboCharger WSD), to see that the information about it online leaves gender out of the equation, describing it as "for lighter-weight riders." This, even though the "WSD" in the name stands for "Women-Specific Design." My guess is that it's because cycling is male-dominated, and thus smaller-framed men might be a large share of the customer base for this. But still, the fact that it felt weird/surprising says something about how uncommon gender-neutral marketing is.

Ugh. As a woman who is the US male average height (5'10"), the "ladies are tiny with their tiny hands and feet and T. rex arms!" thing drives me up the wall when it's not making me feel shitty about myself. I would gladly see this association die out rapidly. One of my gay friends describes me as statuesque, though, so that helps.

Guitar A has a high chance of hitting the average male size. (and upper body strength: its not just size: its also weight of the guitar)

Guitar B has a high chance of hitting the average female size.

I dare say more people run around with a gender identity than a size identity. It makes sense to market to that.

Do we want a world where you go into a clothing store and there are clothes for sizes 45-28 and sizes 30-22?

Am I the only person who reads this blog that actually digs all the pink sparkly cr@p?

Then again, being a gay woman, it's my personal statement and all the femmeness is "queered" - whereas if i were hetero, the semiotics of being girly would be way, way different.

For comparison, Fender sold 3/4-size guitars in the '50s and '60s without using gendered advertising.  Their ad copy described them as "for adult and young musicians with smaller hands."

When I started learning to play guitar, I actually started wit ha baritone ukelele, which is the bottom four strings of the guitar. With its much narrower neck, my child-sized fingers could manage to reach, and that allowed me to build fingertip calluses and learn basic techniques.

THEN I went shopping for a full-sized guitar with a narrow neck and easy action.

In contrast to this girl-only company, one that simply offered guitars in different sizes would be embracing of both women and the 1/2 of guys on the smaller side of the bell curve.

I'm no guitarist, so I have to ask those in the know - if you're looking for a smaller guitar, are you aware of the plethora of gender-neutral options out there, or will Daisy Rock have been the only one to have caught your attention?

I think Lisa would have a very good point if it weren't for the fact that - especially with the help of a 2-second Google search - there are many non-gendered options readily available. Many of them may well be better quality or value than the Daisy, which doesn't seem to be well-reviewed by its users. So while the marketing may exclude males from this particular brand, it doesn't appear to affect our ability to obtain smaller or lighter instruments without the sparkles.

The gendering is, at least on the surface, unnecessary. But it's also understandable. It's the nature of branding - brands tend to emphasize identity, rather than functionality or other pragmatic concerns. With that in mind, it's impossible to avoid demographic distinctions. I'd also add that the Daisy Rock website clearly targets children and teenagers, who are most likely in the market for their first guitar, rather than adults and serious musicians who would care more about the sound quality than the razzle dazzle. The gendering creates a niche that allows a small business to stand out in a market in which a comparable neutral product would be uncompetitive.

In this case, nobody really loses. But it would really suck for people with less sparkly inclinations if Guitar Center isn't selling any other types of small-hand guitars.

I am a woman with pretty long fingers and I still can't do an F chord on a regular guitar, so I don't really find this ad offensive. There's a reason there are more male guitarists and it's because it's easier for them to play on traditional guitars.

To enhance the popularity of the violin as a musical instrument for the ladies' use, we have had manufactured especially for our trade, by one of the leading European manufacturers, this elegant instrument, four-fifths the regular size.  This size will especially commend itself to the ladies -- for whom it is designed, being lighter, more easily handled and less cumbersome than the ordinary violin.  It is reddish brown in color, beautifully shaded, oil varnished, ebony fingerboard and tailpiece.  The tone is a feature of this elegant instrument that will commend itself to critical players.  We send it C.O.D., subject to examination.  Weight, boxed, 10 lbs.

If you specifically want a smaller, lighter guitar, the Danelectro is a good option. The 1963 copy that they make are about 3/4 size, and all their guitars are much lighter than any others I've tried. Plus, they're good quality, won't go out of tune, come in a variety of colours, and are not "for women".

Maybe I missed it but you neglect to mention that children and young adults can benefit from smaller guitars.

My wife ran into this a lot when she was looking for a downhill bike.  Specialized makes a "women's" bike that is supposedly designed to be more ergonomic for women.  This model is currently called the "Myka" but was called something else a few years ago (I can't recall what at the moment).  Anyway, these bike frames were generally smaller which isn't a bad thing for my wife who is about 5'4" and only weighs 105 lbs.  But the components used on the bike were generally inferior to those on the high end "mens" mountain bikes.  Invariably when she walks into a bike shop she is either jeered at or has to deal with eye rolling dismissive attitude.  When she was first looking into it she was always directed to the girls bikes and she'd basically have to pointedly say "that bike sucks.  I don't want a girls bike.  I want the best bike I can get.  I don't care if it's ergonomic, I want parts that won't break the first time I go down a mountain."  She ended up buying a "small" frame "mens" bike and has never had any troubles because it was not designed specifically for her unique physiological needs.