A short history of trophy hunting in America

Prior to the 1850s, writes cultural studies scholar Matthew Brower, men in America didn’t hunt. More specifically, they didn’t hunt for leisure. There was a hunting industry that employed professionals who hunted as a full time occupation, and there was a large market for wild animal products, but hunting for fun wasn’t a common pastime.

This changed in the second half of the 1800s. Americans were increasingly living in cities and being “citified.” Commenters worried that urban life was making men effeminate, effete, overly civilized, domesticated if you will. Cities were a threat to manliness and nature the salve.

Hunting trophies, taxidermied remains of wild animals, served as symbolic proof of one’s “hardiness.” Unlike the animal parts bought at market — whether for food or furs, as feathers on hats, or the then-popular elk tooth watch chain — animals a man killed himself reflected on his skill and character. 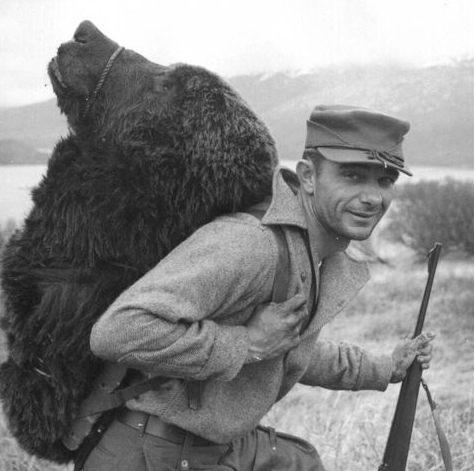 As Theodore Roosevelt once put it:

Nothing adds more to a hall or a room than fine antlers when their owner has been shot by the hunter-displayer, but always there is an element of the absurd in a room furnished with trophies of the chase that the displayer has acquired by purchase.

New, elite recreational hunters castigated both lesser men, who purchased animal parts for display, and women who bought them purely for fashion.

This was the origin of the idea that hunting is a contest, as opposed to an occupation or necessity. To paraphrase Brower, a trophy can’t be bought, it must be earned. Thus, the notion of “sportsmanship” as applied to the hunt. If a kill is going to indicate skill, then the hunted must have a “sporting chance.” Thus, recreational hunters developed an etiquette for sportsmanlike hunting, spread through new hunting magazines and periodicals.

Both subsistence and market hunters, the majority of hunters, were placed outside the purview of the sportsman’s code. Those who hunted out of necessity or for profit never could obtain the aesthetic detachment necessary to be considered sportsmen.

In fact, wealthy recreational hunters claimed that only they were “real hunters” and even organized against people who hunted for food and money. For example,

[Roosevelt himself] blamed the decline of game on market hunters, who he argued, had “no excuse of any kind” for the wanton slaughter of animals.

Trophy hunters successfully enacted statutes limiting other types of hunting, so as to preserve game for themselves.

The rarer and larger the animal, the more exquisite the specimen, and the more a man has killed, the better the animals speak to a his manliness and his elite economic and social class. This is perhaps the attraction of international trophy hunting today: the seeking of more exotic and elusive game to bring home and display. And it is perhaps why some people pay $50,000 to travel across the world, kill a lion, cut off its head, then post it on Facebook.

I admit I haven't studied this aspect of British / European history, but British and European novels from an early date regularly mention the existence of poachers, mostly poor people, hunting for food on aristocratic lands--and the laws on the books that punished the poor for those actions. European aristocrats would eat the game they hunted, in many cases, but they obviously severely restricted the ability of poor people to hunt for game and claimed all the animals on their lands for their own private use. I suspect there's a connection between these US practices and the older European aristocratic traditions, but it seems like the notion of primarily hunting for trophies was a particularly US "innovation."

Indeed. thee was a populist groundswell against the first game and hunting laws because they were very deliberately constructed to favor the well off and make hunting game for necessity illegal. An animus that continues to this day among some hunters and the various State and Federal Wildlife agencies that regulate hunting.

It's cool that hunting for leisure started to gain popularity in the second half of the 1800s. My brother would like to take me on a trophy hunt in a few months, and I want to know a little more about the subject before I go. I'll be sure to keep this information in mind as I continue to do some research on the topic.

Baloney. Market hunting was a boom industry for 80 years in the United States. Market hunters made their money selling game meats to restaurants and grocers in the large cities. There were also part time market hunters that supplemented another job through income derived from market hunting. Market hunting was banned around 1933. "Sport Hunting" , which does not necessarily mean "trophy hunting", existed prior, during, and after (today) to market hunting. It was people who identified as sport hunters that worked with the US Congress and later state legislatures, not only to ban the practice of market hunting, but also to regulate sport hunting and create a funding strategy they themselves would pay into to conserve wild animals and wild places. At several points in history, sport hunting has lost popularity. The reasons are varied. For the past 30 years, or longer, this has occurred and nobody has suggested the logic of this author as reason to recruit new hunters. And that logic was not suggested back in the 1930s either, the author of this article has a wild imagination. Another serious flaw with this opinion presented as history or fact, is that is homogenizes trophy hunting, sport hunting, and market hunting... And, even with a correct perspective otherwise, if a reader does not understand what "sport hunting" really means, said reader will be increasing mislead...

Men didn't hunt in America prior to 1850? Where have you been, You never heard of BOONE and CROCKETT . American Hunters have done more for wildlife than all you liberals put together. Have you ever heard of Robertson-Pittman Act go check it out . Before you slam hunters and hunting get the facts!

Hello. Quite interesting post! As I know hunting always was popular activity among people in America. Even now many people including me like hunting. With modern gear and possibilities it is much more interesting. For example with thermal vision devices like on https://www.agmglobalvision.com/thermal-imaging you can hunt at night without any problems!