How the Bird Hat Craze Almost Killed the Dinosaurs 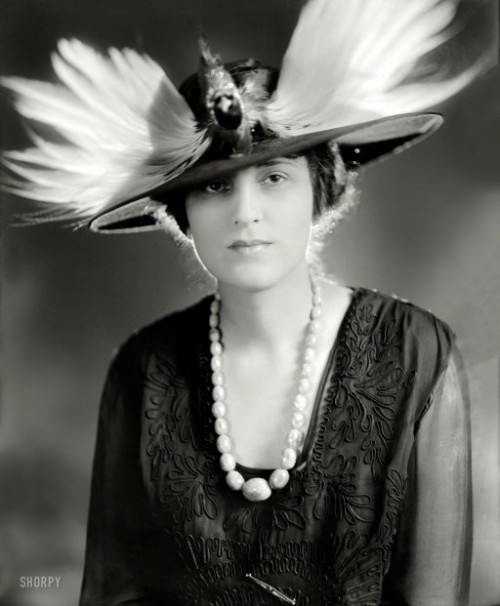 At the turn of the 19th century in the U.S. and Europe, it became wildly popular — and that’s an understatement — for ladies to wear feathers and whole taxidermied birds on their hats. One ornithologist reported taking two walks in Manhattan in 1886 and counting 700 hats; 525 of which were topped by feathers or birds. Buzzfeed has a collection of vintage hats featuring birds.

At the time, not many people thought much of killing the birds. Europeans and their American cousins “didn’t believe they could put a dent in an animal’s population.” Birds seemed to be an “abundant, even inexhaustible” natural resource.  So take they did.  Millions of birds all over the world were harvested for hat makers for years. The Fashioning Feathers blog offers this example:

Ornithologists started to sit up and take notice. One estimated that 67 types of birds — often including all of their sub-species — were at risk for extinction.  Not only were birds killed for their feathers, they were killed when their feathers were at their most resplendent. This meant killing them during mating season, interrupting their reproductive cycle and often leaving baby birds orphaned.

A campaign to end the practice began. In Europe the Royal Society for the Protection of Birds targeted women. They launched a sexist campaign accusing women of supporting the heartless slaughter of birds. Fashioning Feathers includes this image from a pamphlet titled “Feathered Women” in which the president of the Society calls them a “bird-enemy.” 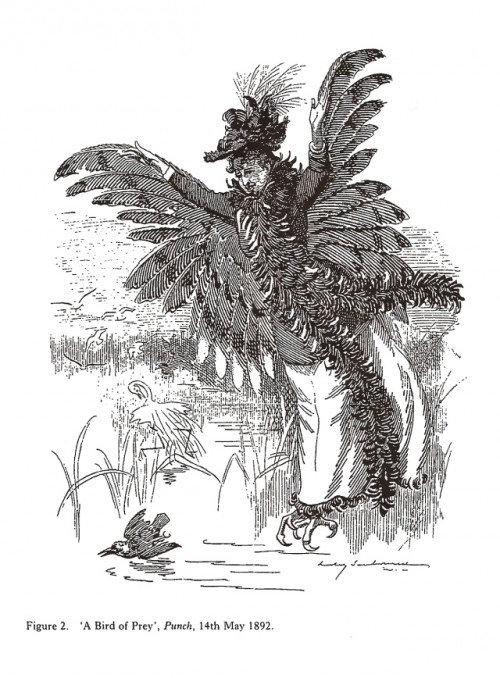 Virginia Woolf went for the jugular, pointing out that — even though the image shows a woman swooping down to kill a bird — it was largely men who did the dirty work of murder and they were also the ones profiting from the industry.

Ironically, middle class women were at the forefront of the bird preservation movement. They were the rank and file and, thanks in part to their work, in the U.S. the movement led to the formation of the first Audubon societies.  The Massachusetts Audubon Society organized a feather boycott, angering hat makers who called them “extremists” and “sentimentalists.” Politicians worried out loud about the loss of jobs. Missouri Senator James Reed complained:

Why there should be any sympathy or sentiment about a long-legged, long-beaked, long-necked bird that lives in swamps and eats tadpoles.

Ultimately the Massachusetts Audubon Society succeeded in pushing through the first federal-level conservation legislation in the U.S., the Lacey Act of 1900.

Jennifer Price's book Flight Maps: Adventures With Nature In Modern America has a whole section dedicated to exploring the Audubon Society’s founding campaign in the 1890s against the extravagant use of stuffed birds to decorate women’s hats, and how that relates to modern environmentalism and feminism.

Culture is formed through the internalization of ideas learned from others and is reformed in part through the weariness that follows hyper-addiction to recycled Ideas.

The bird hats had their day. And our ways will too someday...

Amazing how the injection of unnecessary feminism can turn an interesting story into complete horseshit.

[…] the National Trust’s bird warden – but it is a popular destination for many visitors on bird watching tours throughout the year. The islands themselves are made up of resistant igneous […]

I don't see any mention of dinosaurs in the text. Did I miss something regarding the title of the story?