In 2012, I wrote about the heteronormativity in the couples Halloween costume category at Party City. Now, it’s 2015 and Party City has changed.

I counted all 103 costume sets, dividing them into whether they featured a heterosexual couple, a man-man couple, a woman-woman couple, or were ambiguous. Among them, 74 were aimed at heterosexuals, 12 were for men with men, and 3 were for women with women. 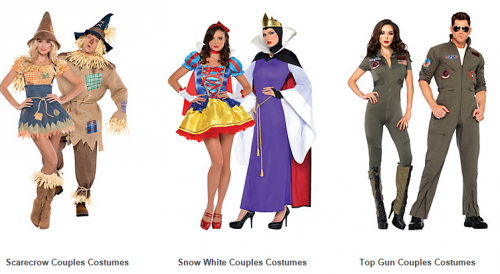 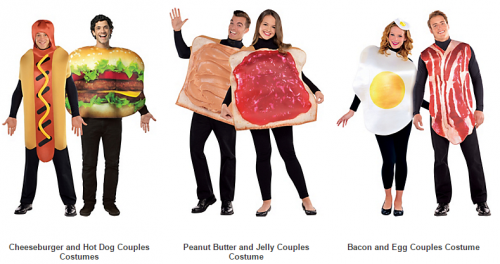 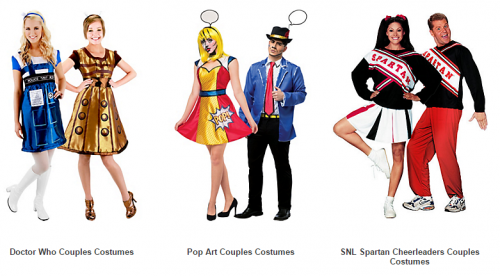 It might be too strong to say that the heteronormativity is gone. There are still more man-woman couples represented than man-man or woman-woman couples, but they’re very centrally there.

This makes people in similar-sex couples more visible. It also has the interesting effect of making some costumes not-so-obviously heterosexual anymore, like the bears or the Ghostbuster costumes. I counted 14 that were at least a little ambiguous as to whether they were intended for a similar-sex or other-sex couple. 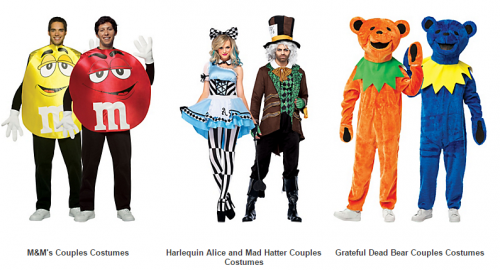 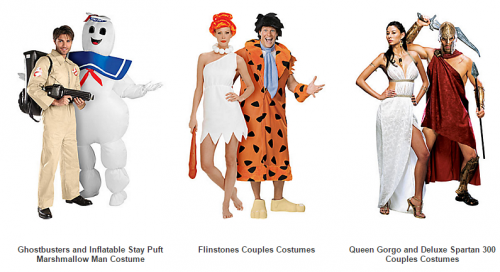 Party City is not doing anything overly clever. Clearly they’re just looking for costumes they already have and putting them in combinations that might sell. And they could do a better job about thinking up woman-woman sets. But, there they are. And that’s a real change.

Regardless of motive, they are starting to act in a way that conforms with my ideals regarding gender, and the practical consequence is that people shopping for costumes are exposed to a greater cross section of the human race, cheers to that.

I am heartened by this change because it shows that something I idealise - the minimization of hetronormativity - is becoming incorporated into the world beyond my imagation and day dreams. Further, I like to think that if someone acts a way I like but does it because of motivations different than mine, it means that the the pattern of actions is more robust. people don't have to believe what i belive if the way they act allows for promotion and freedom for me to belive what i like.

While we can't be 100% sure, I share the authors cynical inference, "clearly they're just looking for costumes they already have and putting them in combinations that might sell". This implies the capitalist ideals of the sales team is what provoked the change and not a shared ideal of providing a broader, more inclusive, gender identification that acknlowedges the existence of more people in the community. But, so what?

why has society changed halloween costumes he dresses are made to be with a sexy intention for woman. For example, look up in google "army woman" and "Army woman halloween costumes", tell me the difference. The costumes are featured with hot attracting girls and with a skirt, army woman don't wear skirts. An forgive me for saying this but they are making girl costumes and making them look like hoes. I feel that halloween shouldn't even exist.

Wearing Secret Identity Suit for women is common because they feel more comfortable in this suit. It is a natural process that a person wears such a thing that he likes as students can visit https://forums.autodesk.com/t5/installation-licensing/autocad-mobile-student-version/td-p/8521154 to get tips for autocad mobile version. I appreciate this article because it tells us about comfortable suits for women.