The word “heteronormativity” refers to a persistent privileging of “opposite”-sex couples and the relative invisibility of people who partner with others of their “same” sex.  Halloween costumes are a great example of the phenomenon.  Costumes designed for couples nearly always assume that they need to outfit a man and a woman, not two men or two women.

As an example, here is the main page for couples costumes at Party City.  Notice that all couples represented are heterosexual: 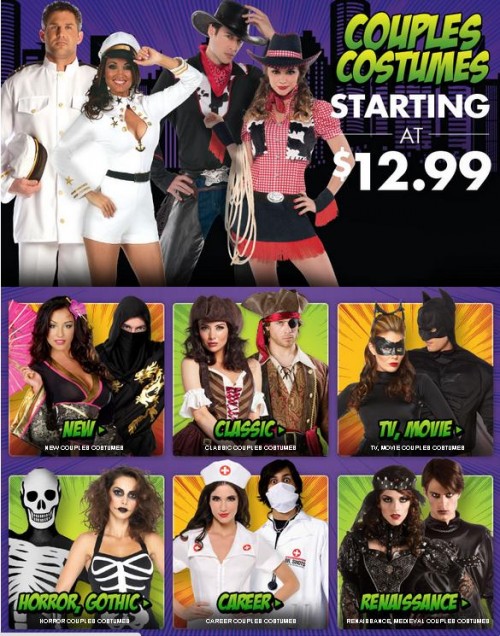 Occasionally the costumes even have heterosexualized themes that metaphorically refer to penile-vaginal intercourse, like this plug and socket costume at Buy Costumes… 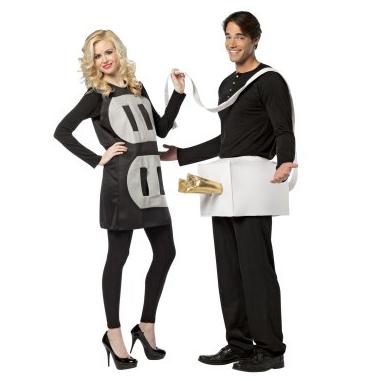 …and this updated usb and dock costume: 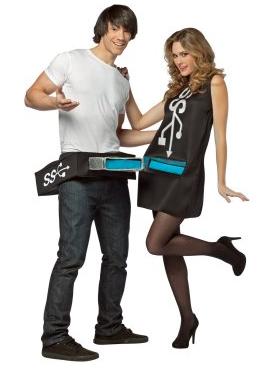 It’s a simple point, but worth observing.  For people who aren’t heterosexual, these Halloween costumes are just one more example of how they aren’t recognized or validated by our society.  We are increasingly accepting of gay people, yet they remain marginal in our collective imagination.

If you click through, there are a couple of 2-man couples costumes in the categories - Angry Birds, Zoolander and Mugatu, Dumb and Dumber, etc.  There are none for 2 women though.

Judging by the plug and socket type costumes, which are already tasteless and offensive even to the supposed hetero folks they're marketing to, I don't think we really want to see similar male-male or female-female couple costumes.  The male costume would have a plug on the back instead of the front, and the female costumes would probably be something like matching pairs of scissors or oversized inflatable tacos.

and, of course, men are doctors and women are (sexy) nurses.

To be fair, they are simply modeling a male and female example of each costume, so they aren't necessarily endorse heteronormativity so much as gendered costuming.

I am sure another man could wear peanut butter...

Pointing out that the intercourse costumes are also presuming that women have vaginas and men have penises.

Also, quite itneresting that the women in intercourse costumes have a less provocative pose than they usually do in costumes by themselves. So, women should look sexy, but not play too heavily on actual sex?

Oh, and they're reducing the receptive genetalia to a hole, erasing the clitoris and it's role in sexuality

" Costumes designed for couples nearly always assume that they need to outfit a man and a woman, not two men or two women."

Those costumes are all hideously sexist (He's the doctor and she's the nurse? Yikes!).   I get that homosexual couples aren't being recognized here but I'm not seeing how het women are "privileged" in this scenerio at all.

Given that homosexual couples make up 4% of the population (actual demographic research, not the 10% myth) and straight couples 96%, how many of the costumes should be modeled by two people of the same sex? Should they be represented to the extent of their existence in society or more? I'm serious.

No one's mentioned the "geisha" and "ninja" couple's costume?

And honestly, I think this section would be better retooled as "group and couple's costumes."  It would remove the heteronormativity, and the implication that "matching costumes" needs to mean "romantic couples."  Maybe a couple wants to be Batman and Catwoman...and their kid wants to be Robin, and their neighbors want to be Superman, Wonder Woman, Green Lantern, and Poison Ivy.  Plus, I doubt anyone would say "I am going to be a cowgirl for Halloween, and my boyfriend wants to do something matching!  But we have no idea what he might be...."

Also, clicking through the link, there are several that could be male couples, but none that could be female couples.  To the point where they can be Fred and Wilma, Barney and Betty, and Fred and Barney, but no Wilma and Betty.  Plus, some of the costumes marked as "men's" are unisex; there's no reason the yellow Angry Bird can't be a woman, or both of them.  But it's presented as "two male angry birds," or "a male Angry Bird and a woman in an Angry Bird themed dress."

Based on your logic it means you would need a representative representation of all different sexual orientations in society. So homosexuals then make up an  minority, so perhaps 1 photo of a gay couple would make you happy?

I'm an avid reader of this blog and greatly appreciate that you devote a
lot of posts to the ways racism, sexism, heterosexism, and class inequality are
reproduced in the images we come across in everyday life.  Keep it up.

These costumes do indeed
reinforce heterosexism.  They privilege heterosexuality and render lesbians and
gay men invisible.  But these costumes are also incredibly sexist.  They present
women as sex objects that are always sexually available for men.  On the
flipside, the costumes for men are all violent and manly (e.g., ninjas,
superheroes, pirates, naval officers, cowboys).  In an earlier post,
someone said these costumes reinforce the "gender binary" and "gender
differences."  However, women as sex objects and violent manhood are not mere
"differences," but rather an inequality.  So I would say that they reinforce sex
inequality and rape culture rather than a "gender binary."  In other words, the
problem with these costumes is not just that they privilege heterosexuality, but
that they are horrendously sexist.

Wow, what a slew of cookie cutter PC comments by people who would get offended by a knock knock joke and would rather complain than anything else.

Newsflash - these are costumes. They're jokes. If they bother you then that much then you had better brace yourself from when you emerge from under your rock - real problems actually exist out there.

Women are sex objects? What, and men aren't? Nobody seems to notice the giant appendages on the male costumes that come with - nothing else. The Freudian getup is literally a giant johnson, full stop. There's nothing wrong with a guy being just a sex object, but there somehow is a problem with a women being one? You aren't crusading for equality or anything of the sort - you're seeing what you want to see and stupidly imposing the inequality you so desperately wish to vanquish in the first place.

Occasionally the costumes even have heterosexualized themes that metaphorically refer to penile-vaginal intercourse, like this plug and
socket costume ... and this updated usb and dock costume. ...For people who aren’t heterosexual, these Halloween costumes are just one more example of how they aren’t recognized or validated by our society.

Might as well say that electrical and electronic terminologies are heteronormative. The cords are literally referred to as having "male" and "female" ends/connectors. Using these terms in the everyday use of electrical and electronic connectors makes it really friggin' easy to just translate them from "male USB connector" into "male-USB-connector costume for men" and "female USB connector" into "female-USB-connector costume for women." The terms of "male" and "female" with USB connectors is also inherited from their already-established use in audiovisual systems. That was likely inherited from previous systems, which - in turn - inherited them from previous systems.

True, there could be many non-heteronormative costume examples of tab-and-slot connectors, but the terminology from which they arise will remain - unless they get changed in day-to-day use - "male" and "female".

In short, claiming that it's the costume designer that is being heteronormative with the modern equivalents of an established framework of describing connectors strikes me as ... paradoxical. True, the costume could have been designed to challenge the established heteronormative labeling of the understanding of how tab/slot connectors function, but I'm guessing that there's very little profit motive for them to do so. So maybe we need to blame the market.

I just don't like that for the most part, women's costumes are supposed to be sexy. What if you aren't shaped like that, are you not supposed to enjoy dressing up?

Great post, and these costumes are painfully awful.
I'd note that Philip Cohen's terms "heterogamous" and "homogamous" are more accurate here (not all "opposite-sex" partners are straight ;) )