Americans Own 42% of all the Guns on the Planet 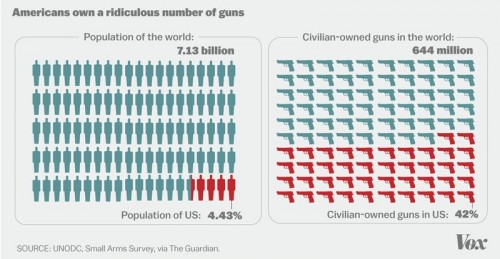 It’s hard to say exactly, but there may be as many guns as there are people in the U.S., or even more guns than people. Since not everyone is a gun owner, that means that the typical gun owner owns more than one. In fact, they own, on average, 6.6 guns each. Two-thirds of the guns in the U.S. are in the hands of 20% of the population. Gun manufacturers know this and market accordingly.

Gun ownership is correlated with both gun homicide and suicide. Accordingly, we also have the highest rate of gun violence of any developed country. In 2013, there were 21,175 gun suicides and 11,208 gun homicides. 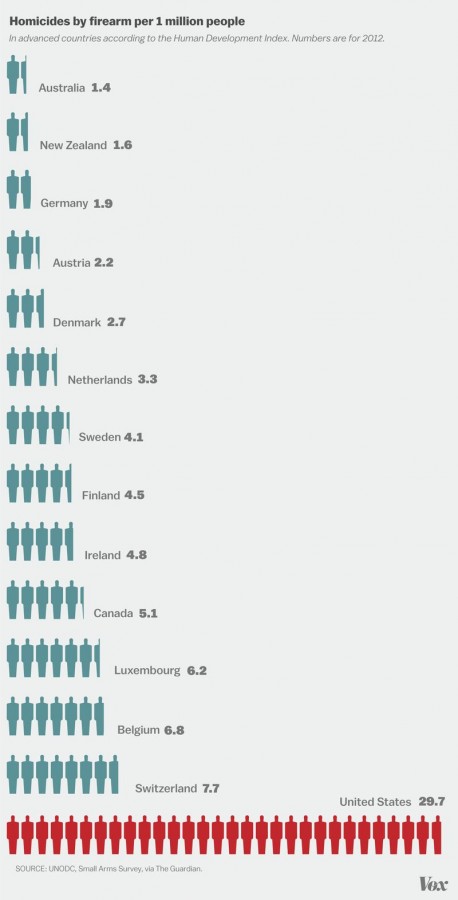 This data was collected by the UNODC and compiled by the Guardian.

Sounds like an evolutionary disadvantage ; maybe they will kill each other off.

This statistic is COMPLETELY misleading!

a) singling out "gun homicide" is utterly stupid; no one cares HOW someone was killed. You are just as dead when you are stabbed, bludgeoned, drowned, strangled or poisoned.

When taking into account ALL homicides, the US are not doing all that bad at all. their homicide rate of around 4.5 is higher than for most European countries but it is one of the lowest rates world-wide.

b) It gets worse: the presentation implies that the US, an immense geographical space composed of 50 States with vastly different gun laws and a population of over 300 million are homogeneous regarding guns and crime.

A more detailed analysis finds that:
- the HIGHEST homicide rates occur in places with SEVERE RESTRICTIONS on gun rights and the LOWEST number of LEGAL guns, per capita!

- violent crime is not at all equally distributed over the population; 80% of all the victims of homicide by gun are CRIMINALS who have previously been to prison, as are their killers, i.e. 80% of all the homicides are GANG CRIMES.

The US have a GANG PROBLEM, not a gun problem!

c) One also has to add that about 50% of the homicide victims are black, as are the killers, followed by Hispanics. White, Asian and Jewish people are far less involved in violent crime.

What good does it to ignore all those factors?

Oh, right: you just want to ban guns, you are not really interested in what works and what doesn't!

Guns are the best! I own 2 rifles and one pistol, myself, but more on the way. Gotta get my 6.6! "Under no pretext should arms and ammunition be surrendered; any attempt to disarm the workers must be frustrated, by force if necessary." - Karl Marx

In Medierrenean culture, people also have guns but we generally say "let it go" to the problems instead of killing so many people. Or maybe just Sun protects us. Who knows.