The Marketing Tactics of Firearm Manufacturers

Studying up on the literature on gun marketing for a recent interview with the New York Times, I found a 2004 article on the topic with some really interesting findings.

The study — by public health scholar Elizabeth Saylor and two colleagues — asked what tactics marketers use to sell guns in a single month of advertising.  In contrast to what you might imagine, only a small minority of gun ads emphasized self-protection (3%) or a Western cowboy lifestyle (5%). Zero percent mentioned protecting one’s family. Only 15% of gun ads linked ownership to patriotism.  The most common substantive theme was hunting, but even that was a theme in only 20% of ads. 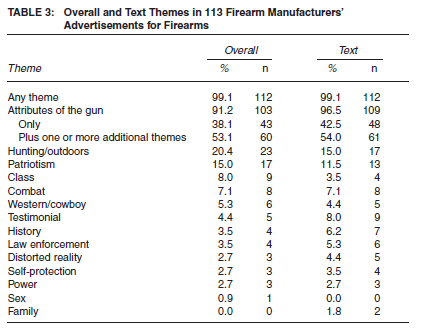 So what are gun advertisers highlighting in their ads?  Technical attributes.  The majority of gun ads (91%) emphasize the things that make one gun different from the next.  For example, they discuss the quality of the gun (61%), its accuracy (38%) and reliability (35%), and its innovative features (27%) and uniqueness (21%). 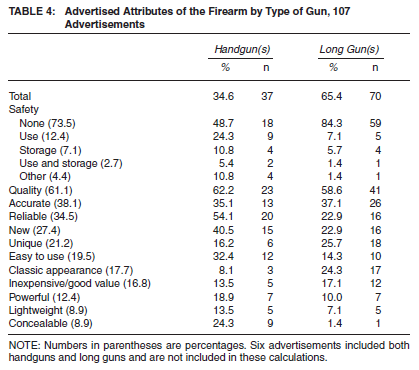 Why are gun manufacturers using this marketing strategy?

Here’s where the statistics get really interesting.  At the time of the study, 44 million Americans owned firearms.  Three-quarters of these owned more than one gun. In fact, 20% of gun owners are in possession of 55% of all guns (excluding law enforcement and military).

In other words, guns are not evenly distributed across the U.S. population, they are concentrated in the hands of a minority.  Most people that don’t own a gun are never going to buy one, so the best strategy for gun manufacturers is to convince people that they need lots of guns.  Differentiating the technical attributes of one from another is their way of telling the buyer that any given gun will do something different for them than the guns they already have, enticing the gun owner to own a range of guns instead of just one.

There are many different uses for different guns. Once someone makes a decision to own a gun at all, it makes sense that they would buy guns for those different uses. Most gun owners will very quickly end up with at least three guns - a pistol, a rifle, and a shotgun, because those will broadly cover the large majority of use cases.

You might as well find it novel that book and magazine manufacturers advertise what is *in* their books, rather than the core principle of the right to freedom of the press. "Read this book because information wants to be free!" "Protect your children from ignorance with books!" Books are, by and large, not distributed throughout the population, either. Some people have whole *libraries* full of them.

Seriously, though. A gun a is a tool. Some people keep a screwdriver in the draw for putting together IKEA furniture, and some people have a shop where they build their own cabinets. This distribution is not unexpected.

Which says to me I shouldn't worry too much about "HOW MANY GUNS" are all  over america, or "WHY DOES ANYONE NEED MORE THAN 1 GUN AND 2 bullets"

of course, a household of 7 might have 7 guns, and that would be 1-2 owners with 7 weapons.

THE MARKETING TACTICS OF FIREARM MANUFACTURERS | Welcome to the Doctor's Office — January 31, 2013

In other news, people who want guns don't need to be convinced to buy them. People who buy gun magazines generally are interested in guns. And different manufactures of guns compete on the features of their product, and not on branding.

Next up, condom ads emphasize the features of condoms, instead of emphasizing the benefits of a culture where sex isn't stigmatized.

Aside from the political or opinion debate over gun ownership, I'm not sure I understand the sociology of this article, or why gun manufacturers are different from any other retailer in some sociological sense...

How is the marketing strategy of gun manufacturers any different from say, Apple iPods? Would it not be true that a person who buys Apple products more likely to buy other Apple products, or the newer models with newer features?

(I don't own a gun, but I am a repeat buyer of iPods... I have the first generation, an iPod shuffle, an iPod touch.... How is my behavior different from gun owners, and how have I been marketed to in a sociologically different way?)

Why are gun manufacturers using this marketing strategy? | iVoter.com — March 13, 2013

[...] The Marketing Tactics of Firearm Manufacturers [...]

Why are gun manufacturers using this marketing strategy? - iVoter.net | iVoter.net — May 24, 2013

[...] The Marketing Tactics of Firearm Manufacturers [...]

How is this different from how any other product is advertised?
People would laugh at an advertisement that started with "This car will
help you travel faster and more conveniently than taking the bus!" Car manufacturers don't need to tell you why you would need a car at all, because that's obvious. They tell you what makes their particular car safer, more fuel efficient, more stylish, etc. than the competition. And the same goes for just about everything except the products you see in infomercials, where they're trying to convince you that you need a totally new type of product that you've never heard of before.
"You already have or want something like our product, but get ours because it's the best" is not shocking and sinister. It's the majority of advertising.
In fact, I bet you could make a very direct comparison between gun advertisements and mascara advertisements. When was the last time you saw an ad for makeup that was explicitly about makeup helping women look beautiful or catch male attention? Everybody knows this is what makeup is for, and ads don't usually bother mentioning it. The main focus is all on their new and improved applicator brush and their cool-sounding product name and "gives you 50% longer lashes!" and "lasts for 24 hours!"

And I can imagine someone coming back at this with "but the makeup industry DOES have an evil agenda", but my point is, advertisements like this are common and they aren't what determines whether we should be suspicious of a product.

It appears the study cited is dog-bites-man news. The manufacturers are selling to a population that already buys guns and they're differentiating themselves from the competition, just like how any other product with competition would be sold.

I remember reading that really, most guns are bought by 'collectors'. Hobbyists who rarely use firearms but always have to have the latest model or accessory. It's like collecting dolls. Except. You know. Dolls don't kill people.

Using marketing to promote your product, service and company provides
your business with a chance of being discovered by prospective
customers.

I own a 9mm pistol for carry around my place of business and residence for self-defense against a singular threat, a 7.62x39 semi-automatic rifle for shots under 300 yards and tactical situations involving more than one threat (defense of self, defense of others), and large caliber bolt action gun for target-shooting, long-range shots, large game, etc. I also plan to buy a lever-action rifle chambered in .22lr for plinking, small game, and getting rid of varmints/snakes/pests.

This may seem excessive to the uninitiated, but each and every weapon I own serves a unique function and purpose. I am a US Army veteran and I manage rental properties for my family in a neighborhood where gunshots are a regular occurrence. Last month, one of our buildings was shot up with a semi-automatic rifle and a semi-automatic pistol by some neighborhood thugs. They sprayed the building with rounds for no apparent reason, risking the lives of over a dozen innocent people, including children and two newborn babies.

My politics are far left (libertarian socialist), I'm not some conservative gun nut with an ax to grind. I feel a duty and an obligation to the people around me to be prepared to defend my community from existential threats like what we faced last month. Some ivory-tower intellectuals would have you believe that citizens have no reason to own a weapon, because they, personally, have never been in a situation where lethal force was being exerted all around them. For some reason, I think they would change their tune if their homes were being penetrated with lead.

[…] isn’t for everyone. Most of the guns in the U.S. are owned by a minority of residents, said Lisa Wade, an Occidental College sociology […]

[…] what we know generally about the way guns are marketed: With power fantasies, aided by extremely geeky levels of infatuation with hardware. As deeply as uncomfortable as it is to consider, mass shootings play off this marketing strategy. […]

I am currently using https://getprospect.com/crm in order to widespread business better. This web tool helps to get more customers and clients within a short period of time. You are getting all in order, synchronize lists and automate workflows, make everything in order.

I am currently using web based contact manager software in order to widespread business better. This web tool helps to get more customers and clients within a short period of time. You are getting all in order, synchronize lists and automate workflows, make everything in order.