Where Do Young People Get Knowledge About the Clitoris?

The D.C. Council’s Committee on Health released a report after surveying high school students about sex education. One of their questions was about the source of sexual health information. The pie chart below shows that students name, in order, their parents or guardians, health workers, teachers, friends, and boyfriends or girlfriends as the most common sources of information. 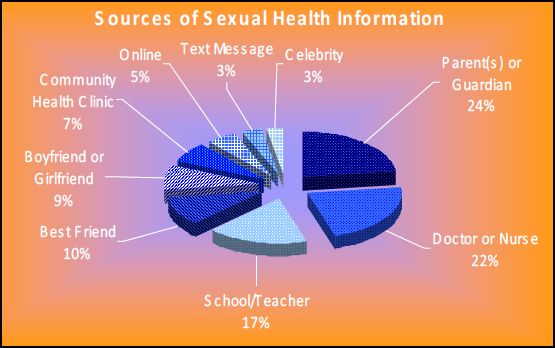 I asked a similar question in a study I did with college students (full text). The students in my sample rated their friends, secondary school teachers, books, their sexual partners, and the media as their most important sources. Men also included pornography. Very few students counted parents among their most valued sources. (Significance indicators are for sex difference.) 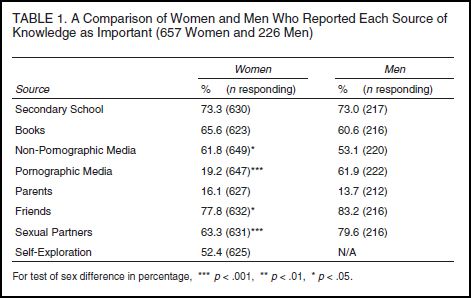 My co-authors and I were interested in how those sources correlated with actual knowledge, specifically knowledge about the clitoris. And so we gave them a “cliteracy test,” we had them answer a set of true/false questions about the clitoris and find it on a diagram of the vulva. 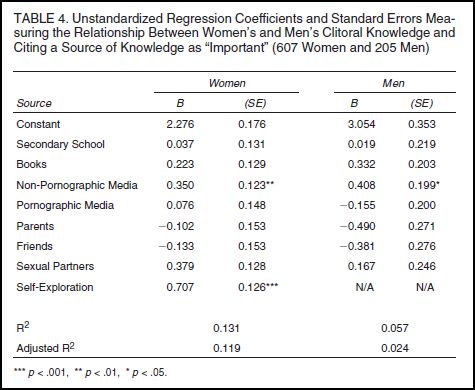 In other words, the best source of information about the clitoris is probably the… clitoris, but female college students would rather read books to learn about it.

This puts the D.C. study into some perspective.  The high school students in that study reported that their parents or guardians, health workers, teachers, friends, and boyfriends or girlfriends were sources of sexual information, but that doesn’t mean that they are good sources. It could be that they’re giving them misinformation or good information only about certain things.

Originally posted in 2009. You can see a summary of our findings on the correlation (or lack thereof) between knowledge about the clitoris and orgasm for women here.

Thank you for this (and for the citation of the paper which will be my morning coffee reading tomorrow!)

I was shocked and saddened a few months ago when talking to a heterosexual female friend who was saying that she often simulated orgasm with guys. When I asked why she doesn't tell them that they aren't giving her pleasure, she said that she doesn't want to hurt the guy's pride, and that he would get upset and want to keep on trying if he knew that she didn't have an orgasm. I then wondered HOW a woman can fake an orgasm, when the muscle contractions involved are so rapid, powerful and involuntary.... apparently the men she has slept with don't notice the difference...

What does the fact that there are women who don't dare to tell their partners that they are not climaxing say about our culture and sex education?

I sometimes tend to fall into the stereotype that it's so easy to be a heterosexual, but it seems like it is quite tough to be a sexually active heterosexual female! Don't fake pleasure... you DESERVE it just as much as your male partners!

I would suggest that many men don't want to be the only one having fun during sex, but don't or can't recognize when their partner is faking. For that reason, I feel that it's important to be able to communicate about sex and what you like during sex, and to explore new things that you might both find fun.

With regard to the HS survey, it's not too surprising that HS students would provide the answer that is expected to be heard. Also, why wasn't pornography or media included? What that supposed to be part of "online"?

One of their questions was about the source of sexual health information.

My co-authors and I were interested in how those sources correlated with actual knowledge, specifically knowledge about the clitoris.

That sounds like a good way to get dramatic but inaccurate results. If you asked people how they learned about the clitoris and then tested their knowledge you'd probably get very different results than asking how they learned "sexual health information" and then switching to the clitoris for the second part.

So it's not really fair to say that the respondents are all out of touch with their bodies: school is great about telling you all about STDs and fallopian tubes but that isn't the kind of information that is learned from masturbating, for example (and *is* the kind of information that is implied by the phrase "sexual health.") But schools won't teach you how to have a good time or how to please a partner, so switching to a topic that is more about female pleasure and less about pregnancy or genital warts is a bit inconsistent with the first survey. Of course you'll get different results with such different questions.

This an area where I think our ideas about what is masculine and feminine really hurt both women and men. The erection and pleasuring a woman are so tied up in a man's masculinity that it really does hurt their ego and pride if the woman does not have an orgasm. And it really is hard for a woman to bring it up. Not only because they don't want to hurt the man's ego, but because that tightrope women walk between a slut and a prude make it very difficult for a woman to talk about sex with her partner. It isn't feminine. But then she doesn't want to be frigid either. So she often fakes it.

Also, women are taught it is their fault and that something is wrong with them if they don't have an orgasm through intercourse alone. Unfortunately what we learn about sex and gender roles often hinders the female orgasm. The majority of women don't have an orgasm through intercourse alone. Yet we are taught that that is how we are supposed to have an orgasm. So a huge majority of women think there is something wrong with them, so they fake it.

And when women don't have orgasms, they often lose interest in sex, promoting the stereotype that women don't like or need sex as much as men. It's all so sad. So many women think they are dysfunctional because they just don't know enough about their bodies.

And John is right. This hurts men as well. Imagine thinking you are in a mutually satisfying sexual relationship and either finding out you are not, or having the sex become infrequent.

Forgive me, but I suspect a little correlation/causation problem here. Not having the relevant parts I can't say for sure, but the impression I've gotten is that if you already know where your clitoris is, self-exploration is way more fun -- and if it's more fun, you're likely to do more of it, learn more from it, and consider it a more important source of information. It also seems like more sexually liberated women are more likely to know where their clitoris is and also more likely to conduct a lot of self-exploration.

Also, on the faking-orgasms front I'm with karinova -- as a mostly straight man, there are times when I'm just not going to have an orgasm, and I'd prefer that neither of us have a complex about it (especially since my impression is that for both men and women, orgasm-related stress -- will I have one? what if I don't? -- detracts from the experience and actually makes orgasms less likely). And for me, the correlation between whether or not I have an orgasm and how much I enjoy the sex is pretty weak if it exists at all. I think the orgasm-centrism of our thinking about sex is a little silly, to be honest (although I can't really argue with efforts to replace male-orgasm-centrism with broader orgasm-centrism, and I recognize that comparing frequencies of orgasm is useful as an approximation of how much effort is invested in each person's pleasure). I think it's important to recognize and celebrate a variety of sexual needs, desires, and sources of pleasure.

[...] In a recent study of D.C. high school students, surveyors found that parents or guardians, health workers, teachers, friends, and boyfriends or girlfriends were [...]

Posting really late, but it occurs to me that, given the strong parallels between a penis and clitoris, that men could gain knowledge about the clitoris through self-exploration too. Most probably haven't thought about the parallel, though.

Where Do Young People Get Knowledge About the Clitoris? » Antropologia Masterra — March 21, 2015

[…] Lisa Wade is a professor of sociology at Occidental College and the co-author of Gender: Ideas, Interactions, Institutions. You can follow her on Twitter and Facebook.(View original at http://thesocietypages.org/socimages) […]