Knowledge About The Clitoris And Orgasm For Women

Shameless self-promotion… and some really interesting findings regarding knowledge and frequency of orgasm in a non-random population of undergraduates. This first graph shows the percent of male and female respondents who (1) correctly located the clitoris on a map of the vulva and (2) correctly answered a series of true/false questions about the clitoris.

You’ll see that there is surprising little difference between men and women (considering that women have had access to a clitoris all their lives and men have had access only recently, if at all), though you’ll see that men are more likely to think most women will have an orgasm from penile-vaginal sex (most women don’t) and women are more likely to think the g-spot is another name for the clitoris (it’s not). These two cancelled each other out such that the average knowledge score for men and women was statistically the same. The same! 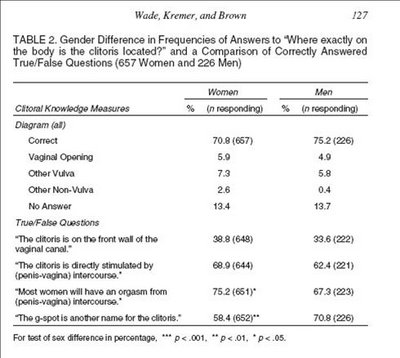 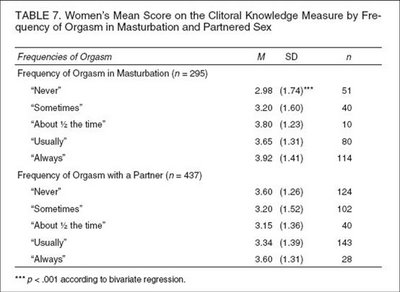 So, for some reason (feel free to speculate), even when women know about their own bodies, they either keep it to themselves, or have partners that don’t want to hear it, or both.

Hmmm... disturbingly the mean scores for those who never orgasm with a partner and those who always do are identical...

[...] Also see my findings (from the same paper) on the correlation (or lack thereof) between knowledge about the clitoris and orgasm for women. [...]

I would be interesting to compare the results of a similar study with older, more experience women.

[…] orgasm gap is a real thing, and it is what it sounds like: When it comes to men-women sex, men have orgasms a whole hell of a […]

[…] orgasm gap is a real thing, and it is what it sounds like: When it comes to men-women sex, men have orgasms a whole hell of a […]

Very interested in ready your paper, but the links to it above do not seem to be working... ?

People should discover the pleasure of orgasm like a big surprise or by accident because I don't think anyone is ready for the experience that is probably the best feeling you can have next to entering heaven Sex should be the expression of all the love that is in your soul if you have one or believe you do!