Urban planning is a partisan issue. The graph below, produced by the Pew Research Center, shows that the American public are evenly split between small, walkable communities (48%) and sprawling suburbs with McMansions (49%), but that split is strongly partisan.

77% of consistent liberals want to live in neighborhoods where “the houses are smaller and closer to each other, but schools, stores, and restaurants are within walking distance.” In contrast, 75% of consistent conservatives prefer it when “houses are larger and farther apart, but schools, stores, and restaurants are several miles away.” 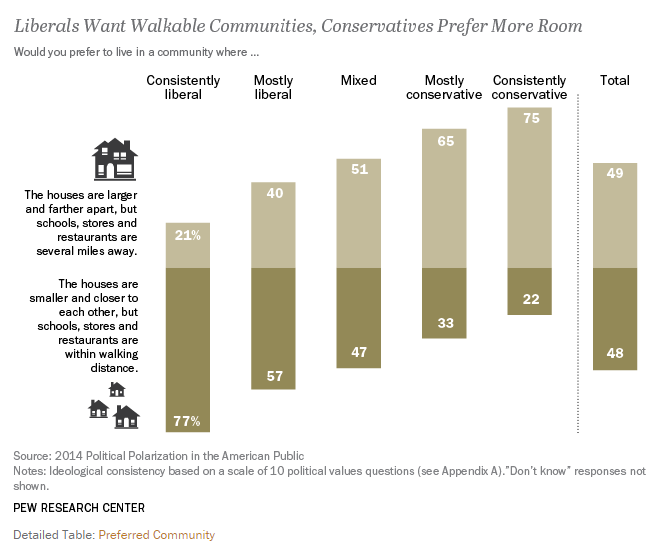 Relatedly, Americans are about evenly split between those who prefer to live in cities, suburbs, small towns, and rural areas, but there is a clear partisan divide. 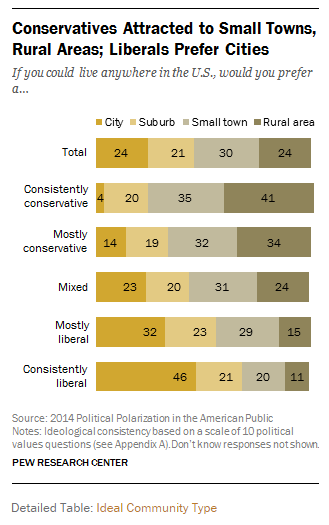 And everyone seems to agree that they want to be near family, good schools, and the outdoors, but liberals are significantly more likely to care if they’re near art museums and theaters. 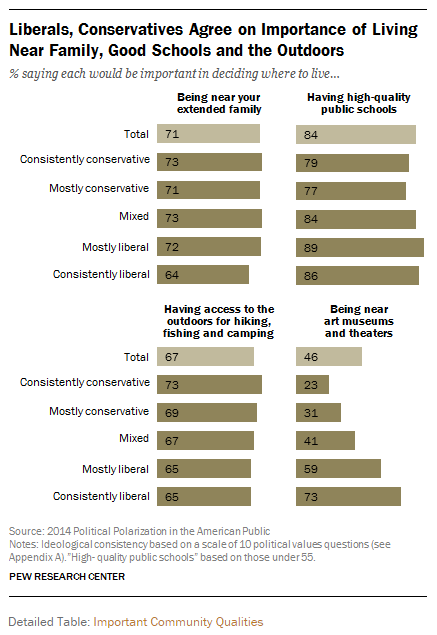 I’m familiar with the idea of the urban liberal and the rural conservative, but I’m still surprised by the strength of these correlations. If the preferences hold true in real life, it means that there is significant partisan residential segregation. That would translate into fewer friendships between people on different sides of the political spectrum, fewer conversations that help them see the others’ point of view, and more cross-group animosity.

In fact, that’s exactly what we see: a strongly partisan population that doesn’t talk to each other very much.

City mouse, country mouse. Still a real divider :-) You can explain so many additional bits of ideology with it, too.

In the country ideology, if you don't have food, it's because you were either lazy and didn't plant any, or because nature didn't cooperate. In the city ideology, it's because the people who have food won't give you any. The two problems point to very different solutions.

Fewer people live on farms, but the ideology and values continue in suburbia and small towns.

We have created worlds to live in--some real (cities/rural), some familiar (religions) and some virtual (partisan TV/Websites)--that tend to reinforce in-group belief patterns. These groups give rise to truly interesting cultural differences, but they also foster fear, distrust and a lack of listening for understanding.

There's another pretty huge consequence of this kind of split, and that's in our right to representation. Congressional elections are done by mostly contiguous districts, which means that, if liberals are disproportionately crowded into cities, districts will generally be drawn to favor conservatives. And this is indeed the case; Democrats have won the popular vote in House elections in all recent years, but Republicans have won more seats. And that's not even getting into the issue of the Senate, which is purposefully skewed toward less-populated areas, or the issues of denying some people in more densely populated areas (DC, obviously, but Puerto Rico too) any kind of national representation.

I'm glad I saw this--I'm an American living in Europe and semi-thinking of coming back, but this is a good reason for me to think again. The breakdown would look very different here, because the settlement pattern is so different. There are some car-dominated suburbs, but they're not the standard development pattern in the region where I live. I live in a 'small town' (not quite a village) and walk everywhere, including to the station where I can catch a train to a nearby city, an international metropolis, or the countryside. Since I don't drive, when I was living in a big city in the US the countryside was effectively off limits, but here I can easily take a train or bus out into the country and a relatively short walk from there into the wilderness. I'm a bit dismayed to realise that not only is that pattern not common in the US, it's not even desired by most people.

"If the preferences hold true in real life, it means that there is significant partisan residential segregation."

You know, you don't have to infer this. Take a color-coded demographic map of population density. Then take a county-level voting result map from a recent election. Side by side, yup, they look pretty much the same.

I don't find it odd that conservatives would value art museums and theaters less than liberals considering that so much of the West's cultural products tend to be made by liberal-leaning artists and express liberal political points of view. I mean, if most art and movies expressed conservative points of view, how many liberals would be dying to live nearby museums and theaters?

Interesting divisions. Another question that might add a different angle is to see how willingness to fund the infrastructure for different community designs varies by political tendency. Would conservatives still support neighborhoods that are more spread out if taxes have to rise to fund road, sewer and other infrastructure construction over these greater distances?

I would also assume this has to do with where people are raised, and the ideology implanted through childhood. The more rural / suburban communities create huge spacial divisions between people and thus expose those living their to far less diversity. There have been several studies showing that mere exposure to people different than you increases your liberal viewpoint / level of tolerance for difference, thus those raised away from dense cities would be likely to remain more conservative and vice versa.

Job Sprawl May Be Ending — And For The Same Reasons The Partisan Politics Are Spreading | Kitsch-Slapped — March 5, 2015

[…] Lisa Wade, PhD, states, this goes along way to explain the huge “Red & Blue” partisan divide in our […]

But how do each feel about socialized highways and subsidized parking ?

[…] prefer urban living and half prefer rural life—the split is apparently highly partisan. So Lisa Wade of the blog Sociological Images asks the question for us: “Can you guess someone’s political preferences by the size of their […]