Children of the Prison Boom

The United States imprisons more people than any other country. This is true whether you measure by percentage of the population or by sheer, raw numbers. If the phrase mass incarceration applies anywhere, it applies in the good ol’ U. S. of A.

It wasn’t always this way. Rates of incarceration began rising as a result of President Reagan’s “war on drugs” in the ’80s (marijuana, for example), whereby the number of people imprisoned for non-violent crimes began climbing at an alarming rate. Today, about one-in-31 adults are in prison. his is a human rights crisis for the people that are incarcerated, but its impact also echoes through the job sector, communities, families, and the hearts of children. One-in-28 school-age children — 2.7 million — have a parent in prison. 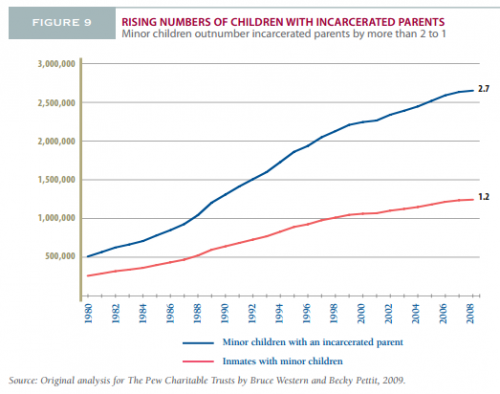 In a new book, Children of the Prison Boom, sociologists Christopher Wildeman and Sara Wakefield describe the impact of parental imprisonment on children: an increase in poverty, homelessness, depression, anxiety, learning disorders, behavioral problems, and interpersonal aggression. Some argue that taking parents who have committed a crime out of the family might be good for children, but the data is in. It’s not.

Parental incarceration is now included in research on Adverse Childhood Experiences and it’s particular contours include shame and stigma alongside the trauma. It has become such a large problem that Sesame Street is incorporating in their Little Children, Big Challenges series and has a webpage devoted to the issue. Try not to cry as a cast member sings “you’re not alone” and children talk about what it feels like to have a parent in prison:

Wildeman and Wakefield, alongside another sociologist who researches the issue, Kristin Turney, are interviewed for a story about the problem at The Nation. They argue that even if we start to remedy mass incarceration — something we’re not doing — we will still have to deal with the consequences. They are, Wildeman and Wakefield say, “a lost generation now coming of age.”

The subtitle of their book, Mass Incarceration and the Future of Inequality, points to how that lost generation might exacerbate the already deep race and class differences in America. At The Nation, Katy Reckdahl writes:

Even well-educated black families are disproportionately affected by the incarceration boom. Wakefield and Wildeman found that black children with college-educated fathers are twice as likely to see them incarcerated as the children of white high-school dropouts.

After the Emancipation Proclamation, Jim Crow hung like a weight around the shoulders of the parents of black and brown children. After Jim Crow, the GI Bill and residential redlining strangled their chances to build wealth that they could pass down. The mass incarceration boom is just another in a long history of state policies that target black and brown people — and their children — severely inhibiting their life chances.

Of course we have yet another ain't-it-awful thread with no semblance of a solution offered whatsoever. Fruitless complaining; to what end?

1. Legalize pot countrywide. I am sick of paying the state stupid money out of my own pocket over such an ill-conceived offence. It hurts taxpayers and the economy, and it destroys thousands of lives. Focus our cops on real crime and not this crap. Turn the left over prisons into loft condos.
2. Pay BIG attention to the fact that with only a high school education some groups are able to reduce incarceration by 50%. This is huge. So many social ills can be attenuated through education, and the price to pay for lack of education is growing every day. And a college education is as close to a cure-all solution for most of what ails any society on earth today as you'll find. Laser focus her.

[…] of kids with incarcerated parents, Sociological Images takes a look. They also ask, who’s harmed by pesticide drift? Taking a […]

[…] incarceration in the US is disturbing for many reasons, but a new book focuses specifically on the negative impact of parental imprisonment on children. The authors point out that even if we can change current practices there is already a “lost […]

There is a serious statistical error in this article. 1 in 31 adults are NOT in prison in this country, 1 in 31 adults in 2009 were caught up in the justice system: including prison, parole AND probation. Actual incarceration rates are still appallingly high, but not nearly that high. This issue is too serious to let such egregious errors slip past the editorial process; it guts your credibility on all other stats, before we even get to arguments.

The reality is appalling enough, for the love of human rights, try to accurately communicate it.

When Daddy Is Dragged to Prison « The Thinking Housewife — March 5, 2015

When you blame the drug war on Reagan or Nixon, you tend to alienate a large segment of the population who might agree with you. Regan could not of unilaterally carried out the war on drugs. He would have had to have support from both houses that were controlled by Democrats at the time. If you wanted to be completely honest, the drug war was started in 1914 with the Harrison act by Francis Burton Harrison, Democrat from New York and signed into law
by President Woodrow Wilson, Democrat.
As someone who is a avid opponent of the drug war we need to stop the mud slinging and begin to include republicans who agree that the drug war is a failure and stop blaming Nixon and Regan for something that both parties are guilty of. To have real drug policy reform we need to be inclusive, not exclusive.