Young black adults are less likely than whites to use marijuana, but extraordinarily more likely to be arrested for its use, according to a new report by the ACLU.  This is old news, but the data never fails to stun.

First, notice that arrests for marijuana possession have grown over the past 15 years, even relative to arrests for other types of drugs.  The first chart is total marijuana possession arrests, the second is the percent of all drug arrests that were for marijuana (note that in neither chart does the vertical axis start at zero and truncated axes tend to make data look more dramatic, as if that were necessary here). 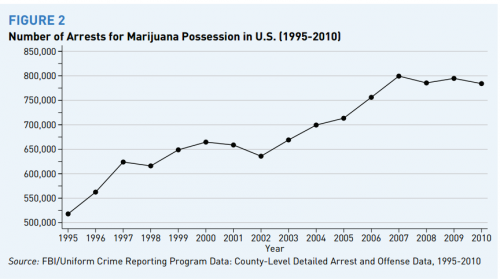 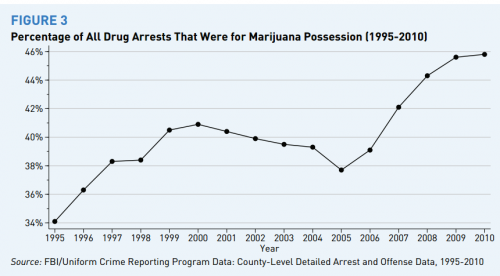 This rise in arrests has disproportionately affected African Americans.  The arrest rate for blacks has consistently been substantially higher than that of whites, but it increased, even so, over the 2000s. 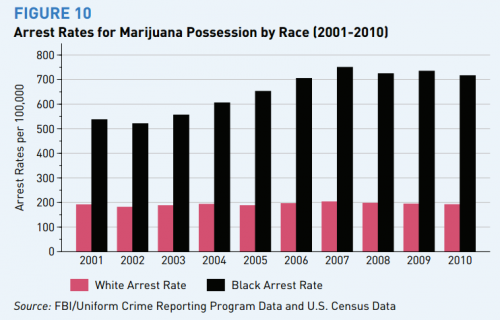 According to the report: 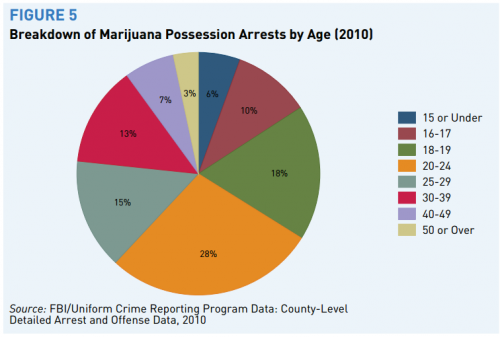 The black arrest rate cannot be attributed to different rates of use.  Overall, blacks and whites have very similar rates of marijuana use (the first figure below), but among 18 to 25 year olds — the population being arrested the most — whites have slightly higher rates than blacks (second figure): 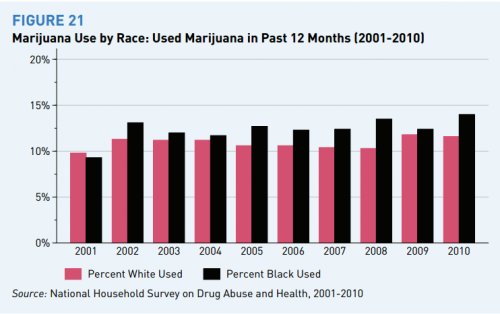 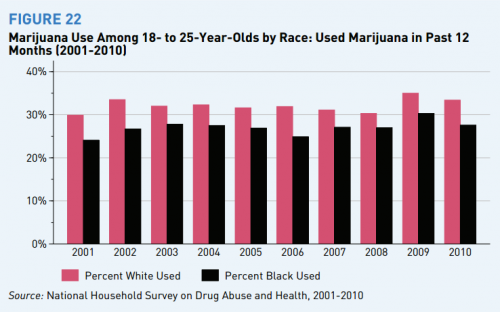 This is a long-standing, well-documented Civil Rights issue.  The war on drugs is a war on black people.  These practices are harmful to individuals, their families, and their communities.  It functions to further the disadvantage faced by black Americans in a society rife with institutions already stacked against them.

More than half of Americans would like to see marijuana legalized.  Legalizing or decriminalizing marijuana would relieve this egregious attack on black communities and save states billions of dollars.  There is little downside.  Relative to other substances, it’s a minor problem. 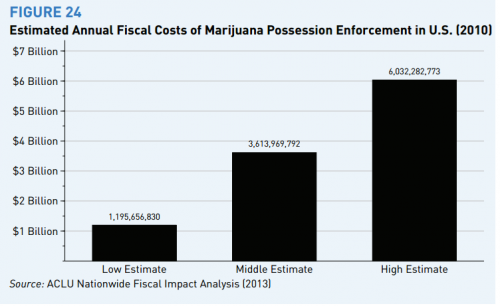 I wholeheartedly agree with the case for legalizing marijuana.

At the same time, though, considering that young black men have a grotesquely disproportional chance of getting arrested for virtually anything compared to their white counterparts, I have to wonder how much ending the "war on drugs" would really change in that regard. Surely the net total of incarcerations would decrease, but not necessarily the racial disparity in prosecutions.

So I was recently in a drug raid because *I have the most awesome housemates ever* Basically Girl1 called the cops on a domestic disturbance issue after Boy1 got drunk and loudly threatened her and punched the wall right next to her head. A fair call. The cops rock up, take him away for an hour or so and bring him home when he's calmed down a bit.
But then eight of them show up the next day because they spotted the bongs and the chop bowls and the grinder and the chop scissors and etc etc etc. And then there were marijuana arrests and took us to the cop shop. Which was awesome.
I am not in America and I don't know everything there is to know about crime patterns over there. But in this case other crime led to the cops realising there was heavy marijuana use in this house and coming back to go through our stuff. (We offered to let them arrest us on piracy charges too but it was declined due to all the required paperwork).
If crime itself is disproportionate in black communities then the cops spend more time there and they sniff out marijuana use more easily (let's face it, it's not hard).
This is meant to account for one reason that there is such a difference between black and white communities for these arrests, not making it ok and certainly not the entire reason. I know enough about the war and drugs to not be that naive.

Doesn't the reason why weed is illegal in the first place have a lot to do with it being considered a 'Hispanic drug' some decades ago and prejudice against Hispanics?

Wait, since when did "civil rights" become "black rights?" As if it would be any less of a rights issue if the disaster that is the drug war would only be applied less racially!

Well, at least this analysis ofcuses on fewer convictions of black people rather than more convictions of white people, as is the response to the unequal appplication of Stand Your Ground law.

I find it hard to empathize with this as a Black issue. I find it more of a socioeconomic issue. Where I live, where it's mostly White people, you are persecuted based on your class and income as well as color. That includes marijuana-related charges.

Maybe some of it has to do with this:

Black people usually have the experience of being treated badly by police officers. So they are more likely to react negatively to a police officer than a white man.

In my experience police officers HATE when someone is angry at them. So much so that they will be unfair/abuse their power/or not be as nice as their usual selves. Maybe... just MAYBE regardless of color. Police officers HATE it when they feel like someone doesn't respect their authority whether that person is white, black, brown, Asian, ugly, pretty, poor, middle class, (rich? idk), etc.

So I'm saying if you smoke weed and are black, brown, Asian, Native American and you're stopped by a cop you can go free or w/o serious injury.

It's weird to think that one person can be so nice to you in one circumstance but that same person can violate you in terrible ways in a different circumstance. I guess that's what power does.

[…] Oakland community and society at large. Jones views the proposal to marijuana reform as the biggest Civil Rights issue of our time and credits public awareness forums, such as those conducted at Oaksterdam as […]

[…] of incarceration began rising as a result of President Reagan’s “war on drugs” in the ’80s (marijuana, for example), whereby the number of people imprisoned for non-violent crimes began climbing at an […]

[…] view the unjust application of “stand your ground” laws and the selective enforcement of drug laws through the prism of civil rights, and who is to say they’re […]

[…] view the unjust application of “stand your ground” laws and the selective enforcement of drug laws through the prism of civil rights, and who is to say they’re […]

I would like to find more information about the benefits than general info.

I'm sure that it is impossible to judge unequivocally here, because in fact this plant is very useful and not addictive if it is not used in the way that many think. Take a look at https://joyorganics.com/blogs/news/types-of-cbd-products-for-pets/, there are even great treats and pet remedies. I think we should change our attitude.