Why Only Women, Wrestlers, and Weight Lifters Wear Leotards.

I am so grateful to reader Emma Farais for recommending that I look into the history of the leotard. It was invented by — well, who else — Jules Léotard.

Born in 1842, Jules grew up to be an acrobat. He is credited with inventing trapeze and performed with French circuses. He invented and then began performing in leotards and he was a big hit. According to the Victoria and Albert Museum:

The original leotard was an all-in-one knitted suit. It allowed freedom of movement, was relatively aerodynamic and there was no danger of a flapping garment becoming entangled with the ropes. Even more importantly, it showed off his physique to its best advantage.

But the leotard lived on. Leotards were adapted for women, but the form and function were similar. Think vintage muscle men and women. 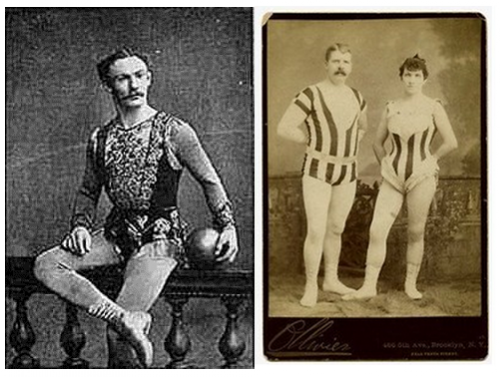 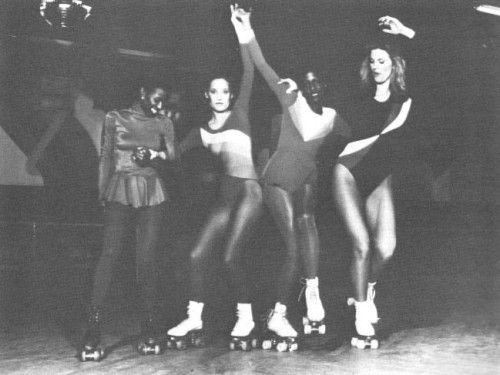 To the disappointment of all the (het) ladies, I’m sure.

Today, a Google Image search for leotard returns all ladies. Mostly girls, in fact. Not a guy in the bunch:

I can only think of two arenas in which leotards for men still hold sway: wrestling and professional weight lifting. And, now I guess we know why.

The onesie version of the leotard, the sentai suit, /is/ becoming more popular with men, however.

While the specific clothes men and women wear is a matter of social custom and varies over time and geography, it seems that the desire of men and women to distinguish themselves from each other by their attire is rooted in nature.

You will catch me in my leotards (or as I call them, bike pants) when the temps drop below 40 degrees. Most comfortable thing to wear too!

As a man who tries to do trapeze whenever possible, I am a giant fan of the leotard, paired with tights. Spandex onesies need not apply.

You forgot one other group that wear leotards: superheroes! ;)

Men's gymnastics is another arena where the leotard also still holds sway. But it's interesting to see the decline of men's gymnastics as the sport more and more has become associated with women. Is that, in part, because of the cultural norms associated with femininity (and/or homosexuality), like pointing one's toes and wearing "leos" (as they're often affectionately called)?

[…] An interesting read on why almost everyone who wears a leotard these days is a little girl. […]

if you're looking for leotards in Aussie, check this out http://www.energetiks.com.au/mens-leotards/ they're quite comfortable ;)

Male gymnasts also wear leotards (technically “singlets” since they have no sleeves) with a pair of stirrup pants or shorts (depending on the apparatus) covering the bottom portion of the leotard (presumably for modesty). The reason why men’s gymnastics is not as popular as women’s gymnastics in the US anyway is because traditionally American women have been much more successful in the sport (having many world and Olympic champions who end up on Wheaties boxes).

The US has only ever had one male gymnast (Paul Hamm) who was ever a World or Olympic champion in the sport. But it’s had a dozen women’s all-around champions (Mary Lou Retton, Kim Zmeskal, Shannon Miller, Carly Patterson, Chellsie Memmel, Shawn Johnson, Nastia Liukin, Bridget Sloan, Jordyn Wieber, Gabby Douglas, Simone Biles, Morgan Hurd). Yet in countries like Japan, China, and Russia, men dominate in gymnastics, making it a much more popular sport there.

Men use leotards also as underwear even if not so many of them do it. They believe leotards are only for women. ONce they try them anyway they adopt them immediately as they are very comfortable for men. I use them normally

Anybody looks better in a leotard and leggings. Anybody.

But with the exception of the last two, they don't call them leotards. Interestingly, it's not the garment that has become so exclusively gendered: it's the word.