At the end of last year, Robin Thicke took a lot of heat for both the lyrics of his song, Blurred Lines, and the accompanying video.  The latter is a transparent  instance of a very common strategy for making men look cool: surround them with beautiful and preferably naked women.

It seems especially effective if the men in question act unimpressed and unaffected by, or even disinterested in, the women around them. It’s as if they are trying to say, “I am so accustomed to having access to beautiful, naked women, I don’t even notice that they’re there anymore.”  Or, to be more vulgar about it, “I get so much pussy, I’ve become immune.” The video for Blurred Lines was particularly egregious, but we see this all the time.  Here’s a couple more examples, featuring R. Kelly and Robert Pattinson in Details.

This is all to introduce a satirical series of photographs featuring performance artist Nate Hill who, on the mission page of his “trophy scarves” website (NSFW), writes: “I wear white women for status and power.”  And, so, he does.  Visit his NSFW site (and thanks to German C. for sending the link).

Hill brilliantly combines a tradition of conspicuous consumption – think mink stoles – with a contemporary matrix of domination in which white women are status symbols for men of all races. It’s not irrelevant that he’s African-American and the women he chooses are white and, yes, it is about power. We know it is because women do it too and, when they do, they use women below them in the racial hierarchy.  Remember Gwen Stefani’s harajuku girls?  And consider this FHM Philippines cover: 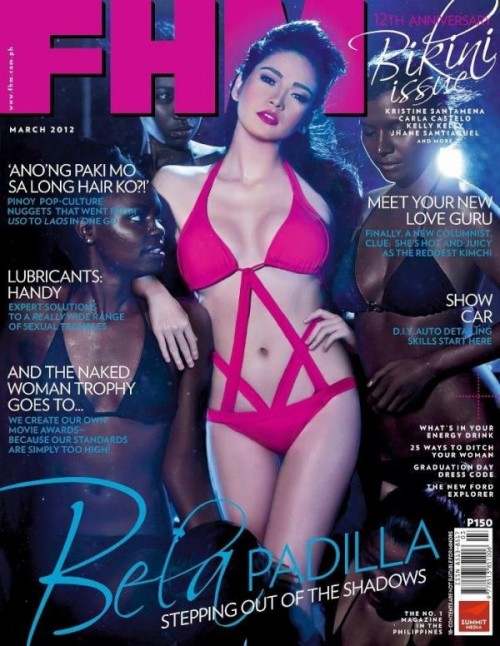 I’m amazed at the ubiquitousness of this type of imagery and our willingness  to take it for granted that this is just what our visual landscape looks like.  It’s social inequality unapologetically laid bare.  We’re used to it.

Somebody — lots of somebodies, I guess — sat around the room and thought, “Yeah, there’s nothing pathetic or problematic about a music video in which absolutely nothing happens except naked women are used to prop up our singer’s masculinity.”  The optimist in me wants to think that it’s far too obvious, so much so that the producers and participants would be embarrassed by it. Or, at least, there’d be a modicum of sensitivity to the decades of feminist activism around the sexual objectification of women.

The cynic in me recognizes that white supremacy and the dehumanization of women are alive and well.  I’m glad Hill is here to help me laugh about it, even if nervously. Gallows humor, y’all.  Sometimes it’s all we got.

These ads are nothing more than petty youth-oriented distractions. The real issue is domestic violence, which should be death with harshly and quickly. Such "men" make me sick.

So how are Nate Hill's photos supporting the fair treatment of women?

I find it humorous that their evidence includes the Phillipine (!) edition of FHM, a series of photographs by someone no one has ever heard of, and an album by super has-been R. Kelly. Oh, and one legit example: Robin Thicke's video from last year.
The obscurity of these examples proves, more than anything, that there is no trend here.

[…] artist Nate Hill has taken the racist, sexist trope of men surrounding themselves with naked or naked-ish women to a new level, saying, “I wear white women [as scarves] for status and power.” Decidedly […]

Good article. One correction: the word you want to use in the second paragraph is uninterested, not disinterested.

A Starter Guide to Studies on Representation | Geek Essays — September 17, 2014

[…] one example from The Society Pages – check out the whole […]

"Somebody — lots of somebodies, I guess — sat around the room and thought, 'Yeah, there’s nothing pathetic or problematic about a music video in which absolutely nothing happens except naked women are used to prop up our singer’s masculinity.' "

This is about as far from "masculinity" as it gets. It is an excellent example performing masculinity...in a singularly unmasculine and failed attempt. Although I understanding why, I find it alarming that people would think this is in any way an accurate representation of masculinity.

Since it is clearly a performance, and one of a perverted (as in distorted) version of masculinity, and if we assume its creators have a modicum of intelligence and actually know what they are doing (something I admit is a stretch), then the really interesting question is: Exactly what point are they trying to make? That would be an interesting avenue for exploration. However, the answer is so unclear, I am ultimately left to assume that the "artists" who created this are, in their real lives, utterly removed from and devoid of much real masculinity.

To the extent that gender is performed, it is incredibly worrisome that boys and young men would see this and mistakenly think this represents masculinity. Yes, like most caricatures/stereotypes it contains within it elements of truth; however, they are grossly one-sided and distorted. To the extent we have boys and young men who want to be "masculine" attempting to adopt this performance, they will (until they come to their senses) be deeply troubled and troubling individuals.