The Politics of Disinterest

Jessica G. drew our attention to the promotional material of Panty Raid.  Panty Raid is two guys, Josh Mayer and Marty Folb, who produce dance music.  As you might guess from their name, their materials include a dismissal of women as fans and an endorsement of men’s entitlement to sexual access to women.  Their slogan for their album, Marine Parade, is: “Audio fondling your girlfriend.” 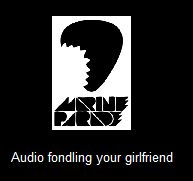 So, “you” are a straight guy.  And, like it or not, these guys are such hegemons that they are makin’ it with your girl, whether she likes it or not.

There is more of this typical misogyny at their website (you can google it), but it was the promo shot below that Jessica felt compelled to send in. 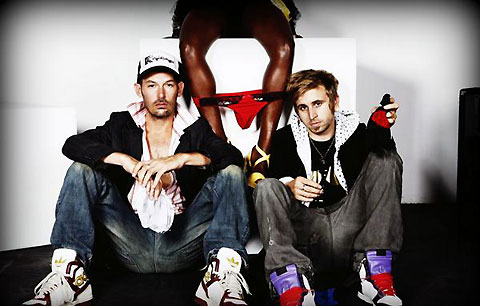 This is a great illustration of what it looks like to embrace both white and male privilege.  We see the bottom half of a black woman sitting with her legs apart and her underwear at her ankles.  Were it not dark between her legs,  you could see her vulva.  Mayer and Folb, both white men, sit in front of her and look at the camera.  Their expression and posture suggest utter disinterest.

This is where I think the privilege is revealed, and embraced, loud and clear.  She is not a human being, she is a vagina and, even as a vagina, she is uninteresting.  She is nothing, really.  Like their sneakers, their trucker hats, and their hoodies, she is only a prop.  What does a sexually available black woman signify?  Urban cred?  Masculine domination of women?  High status in a hierarchy of men?  All of the above?  Congratulations dudes: racist and sexist message sent and received.

While I agree there is a LOT of misogyny present in this group's promotion of themselves, I don't think "panty raid" means sexual assualt. I thought "panty raid" was when you stole a female's underwear? Not off their person, but from their house/bedroom/wherever it's kept when it's not being worn. Still not a friendly thing to do, but that's not really in the realm of sexual assault, is it?

Granted, other things around this group imply such things, I'm just not sure the name does on its own.

To be fair, the term "panty raid" comes from young boys stealing girls' underwear at places like sleep-away camp as a prank. Childish and juvenile, sure, and yes probably quite sexist, but to lump it in with sexual assualt is a pretty big stretch

that picture is just so racist, sexist and wrong.

for the two posters who commented above: I'm not really sure if panty raid can be a form of sexual assualt. Wouldn't some females feel like they were assaulted/violated if their personal belongings were stolen?

I've heard the same definition you guys have, but I think that photograph might suggest a different usage of the phrase.

An "assault" is, quite specifically, a crime of physical violence, not simply an act of humiliation. A "panty raid" would only qualify as sexual assault if the victims are wearing them at the time. This is certainly not how the term is intended.

"Sexual assault" is a powerful term, and I'd hate to dilute it to the point that its gravity disappears.

As far as the ad goes, I think these guys are trying to look like total losers, albeit in the ironic/glib style of hipsters with $60 mullets. Geeky, grotesque, and tasteless are the fundamental flavors of hipster cabaret, and pissing off people with really obvious offensiveness is an easy way to turn a dull idea into a viral internet meme (they should've put the black woman in a wheelchair, just to hit a few more buttons). When we take the bait and express outrage, it gives these guys a lot of undeserved counterculture cred. Probably better just to focus on the fact that the music sucks (which, if you think about it, the band's slogan basically acknowledges).

While the term "Panty Raid" describes the stealing of panties NOT being worn by a woman, there was a "game" in which panties were stolen right off the women: Scuttle. Helen Gurley Brown's described the game from the 1940s and 50s as a “dandy game...they would select a secretary, chase her down the halls...catch her and take her panties off." (Brown did not find this game offensive) There was a version of the game depicted on Mad Men, where the man did not remove the panties, but instead lifted up the woman's skirt to show the underwear to the rest of the staff.

Partially because I cannot see the woman's face, the ad reminds me of sexual assault. I don't know if she is smiling, shocked, humiliated, or unconscious. All I can see is the woman's spread legs and her lowered panties.

I hate panty raid. My boyfriend and his friends listen to them, and I have tried to explain why I consider the group offensive multiple times. Instead I come off as a wet blanket. It's really hard for people to experience these images from a female perspective. After all, why take the time to care if you don't have to?

By the time I got to college in the Fall of 1961, the panty raids which had been all the thing at colleges in the 1950s had disappeared.

I think panty raids fall into the category of gender ritual: They're performed to reinforce a gender identity, display expected gender behavior, and subordinate the other gender.

Essentially, they are one of a boy's first experiences where he learns that he can sexually violate women at will. Panties are stolen because they have a (heavy) sexual connotation. They're not being stolen as little cotton trophies, but symbols of contact with a vagina. It's a symbolic sexual assault, but I personally see the connection straight as an arrow. No boy may go into a panty raid thinking, "Oh boy, now I've touched a vagina!" but on some level he does understand that he's just forced some kind of intimate contact on a woman, and that it has reaffirmed his identity as a man and won him status and influence among other men. It is impossible for that experience not to be significant when it comes to the entitlement it takes for a man to feel he has a right to grab, grope and rape. So it isn't a matter of whether a panty raid is better or worse than rape, but that it's both a symptom and a cause for the behavior that causes it.

Perhaps we should find someone who went on a panty raid in the 1950s and ask them what they were thinking when they did it?

Anyhow, isn't this gross objectification of women pretty standard thing in american music industry. Especially this rap music that is usually "played" by the lowclass black street people. But yes, I must say that seeing black people in such way that they objectify women in their art bothers me less than white people in similar situation such as in this picture. Perhaps because I can identify with white people more easily and thus find a group like this noteworthy among the vast amount of groups that toy around with similar imagery. I guess I just have a racist intuition, regrettably.

what are they holding in their hands?

Assuming that this lovely promo shot is for the "Marine Parade" album... is there any significance to the fact that "your" girlfriend is apparently black?

I don't even know what to think.

Just for clarification: Assault is the credible threat of violence, and battery is actual physical violence. So, for a sexual assault to occur, all that needs to happen is for a person to feel that a person who is threatening them is serious about their threat and might carry it out.

So, while a pantie raid of itself may not be assault, if given the correct context, and if the 'raidee' felt threatened, then that's assault.

So we don't agonize we organize!!! Those 2 men and or asshats will not change their views but we don't have to buy it or support anyone or club/bar etc that uses their services. where ever these to indivduals take there sexist dog and pony show, well organized feminists should have been there already. Contact local clubs, bars, etc, work with student groups, sorieties, unions, other progressive groups and make it clear to any entertainment establishment there will be an organized campaign to NOT patronize their business.

$$ talks and it makes a difference where we spend it. The anti-gay Jamaican artist is being boycotted across the country and is beibng pushed into smaller and smaler venues.

If the 2 DJ are as sesixt as it is reported then somewhere in the mix is homophoic BS as well.

don't kick them in the balls, kick'em in the wallet!

[...] We also added some of the images of disembodied women’s legs used by the band Chromeo to our post on furniture and other items shaped like women’s bodies. [...]

[...] is, apparently, “allergic to vagina.” It’s similar to Lisa’s post on the politics of disinterest. It’s a double form of objectification: women’s naked bodies are used as stage [...]

[...] a woman I found it in abundance.  In the post the writer comments on the politics of disinterest.  The images speak for themselves.  If you’ve ever opened a magazine then you know what [...]