Sexy Women as Food: A Collection

In her now-classic books The Sexual Politics of Meat and The Pornography of Meat, Carol Adams analyzes similarities in the presentation of meat products (or the animals they come from) and women’s bodies. 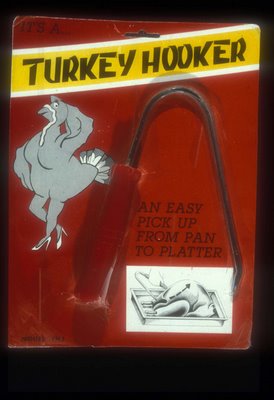 Adams also discusses the conflation of meat/animals and women–while women are often treated as “pieces of meat,” meat products are often posed in sexualized ways or in clothing associated with women. The next eleven images come from Adams’s website: 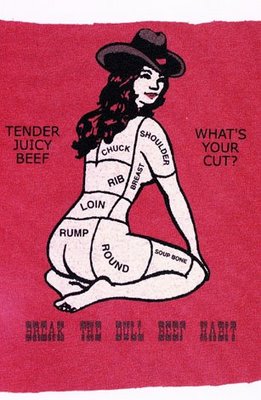 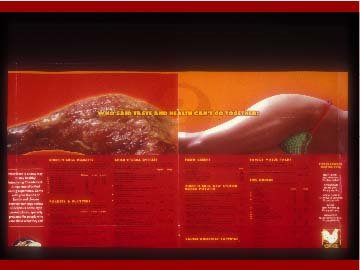 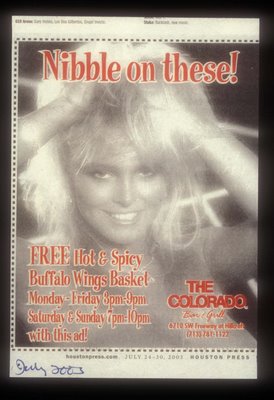 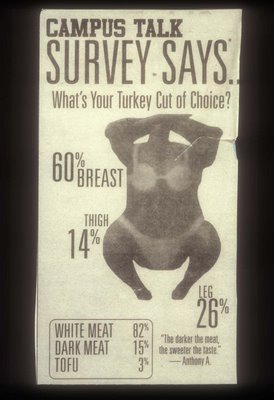 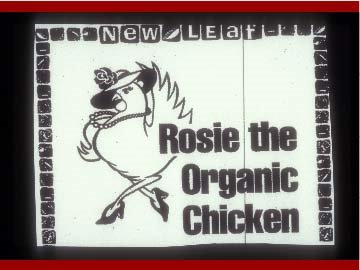 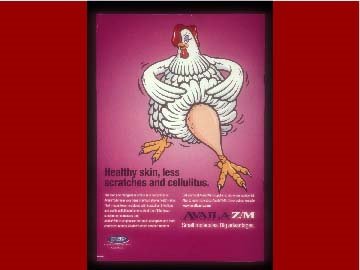 For a more in-depth, theoretical discussion of the connections between patriarchy, gender inequality, and literal consumption of meat and symbolic consumption of women, we highly encourage you to check out Adams’s website.

This type of imagery has by no means disappeared, so we’ve amassed quite a collection of our own here at Sociological Images.

Blanca pointed us to Skinny Cow ice cream, which uses this sexualized image of a cow (who also has a measuring tape around her waist to emphasize that she’s skinny):

For reasons I cannot comprehend, there are Skinny Cow scrapbooking events.

Denia sent in this image of “Frankfurters” with sexy ladies on them. The text says “Undress me!” in Czech. 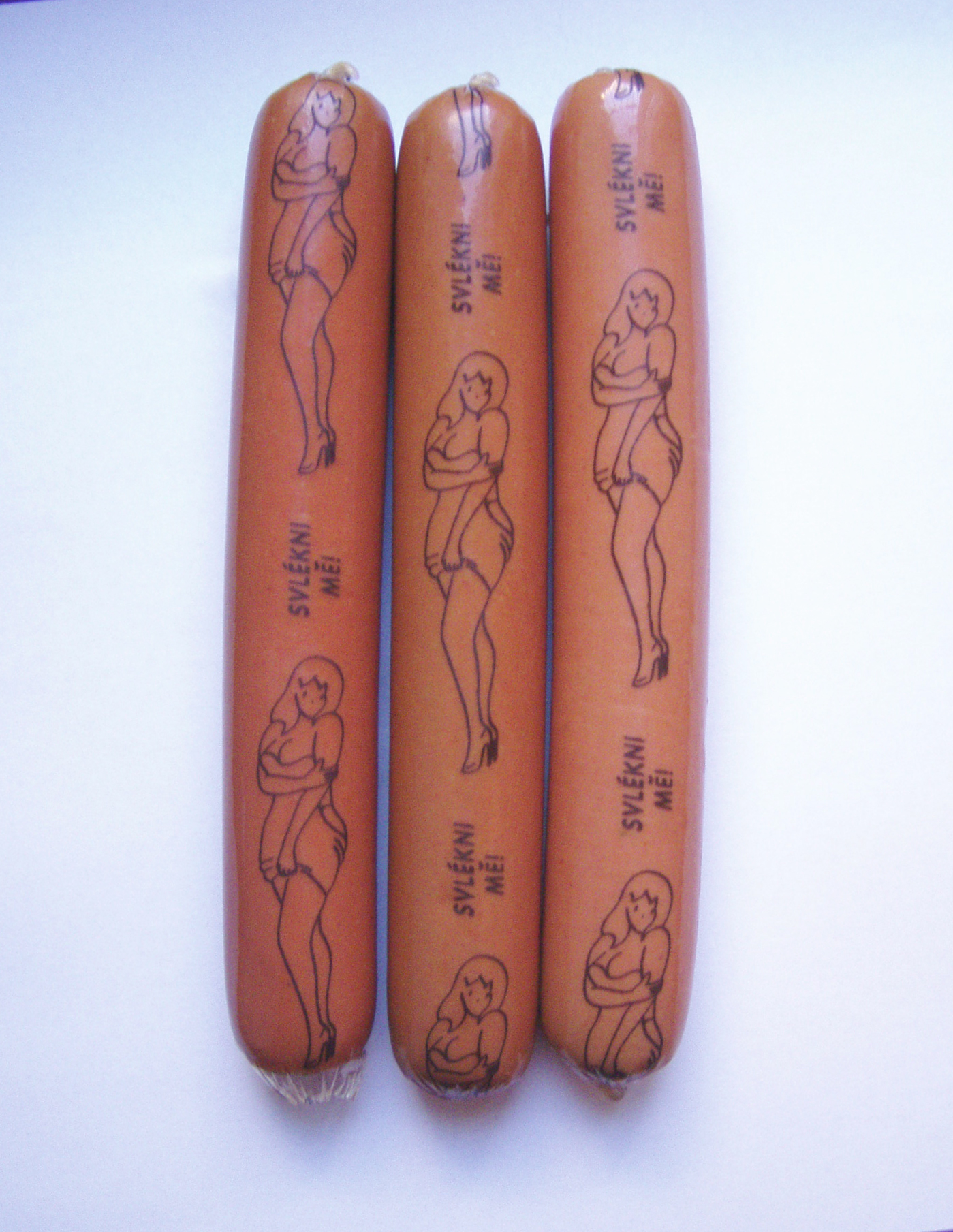 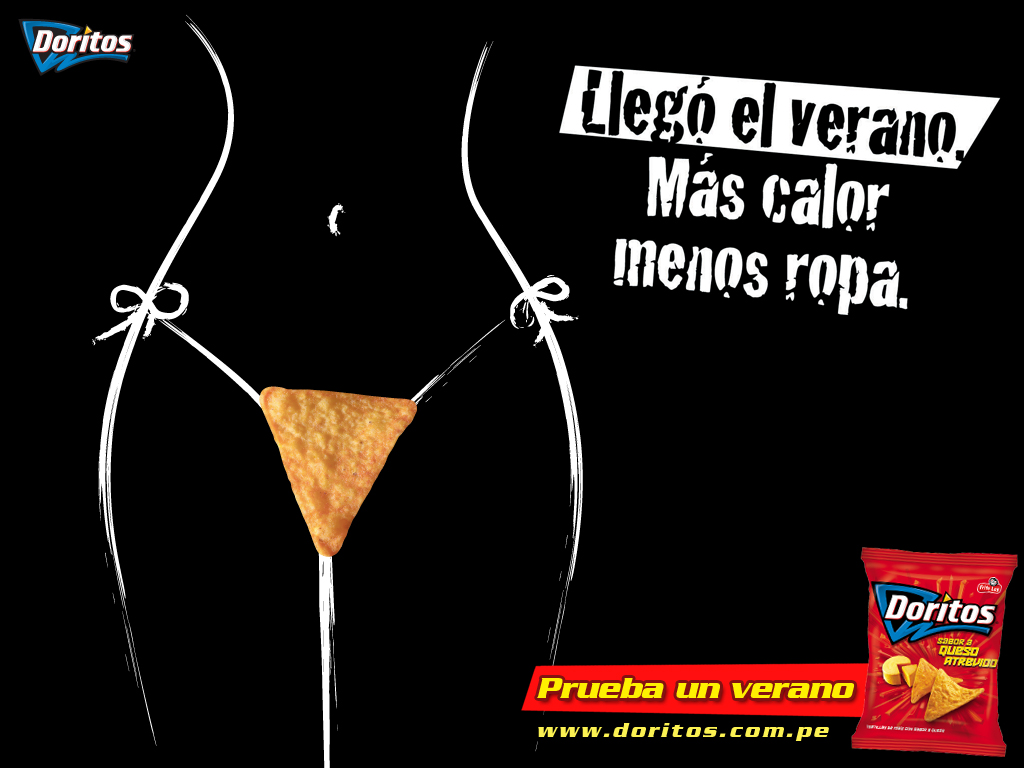 Amanda C. sent in this sign seen at Taste of Chicago: 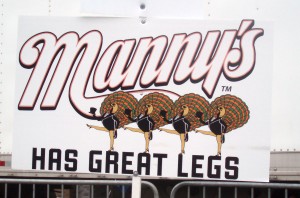 Dmitiriy T.M. sent us this perplexing Hardee’s French Dip “commercial.”  It’s basically three minutes of models pretending like dressing up as French maids for Hardees and pouting at the camera while holding a sandwich is a good gig:

Dmitriy also sent us this photo of Sweet Taters in New Orleans: 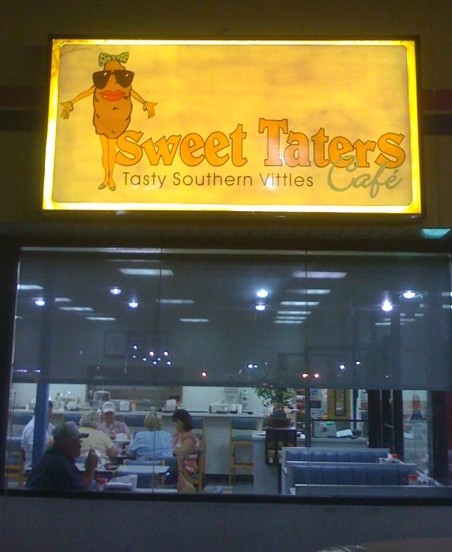 Crystal J. pointed out that a Vegas restaurant is using these images from the 1968 No More Miss America protest in advertisements currently running in the UNLV campus newspaper, the Rebel Yell. Here’s a photo from the protest: 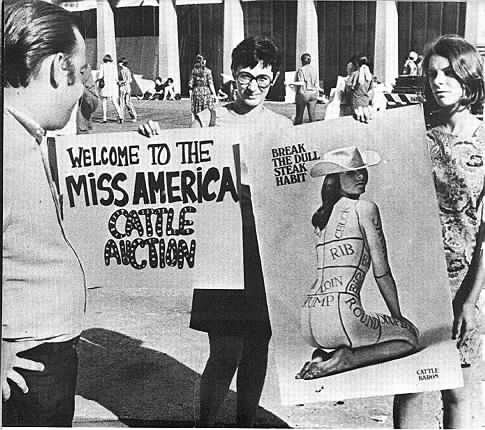 Edward S. drew our attention to this doozy:

Dmitriy T.M. sent us this example from Louisiana: 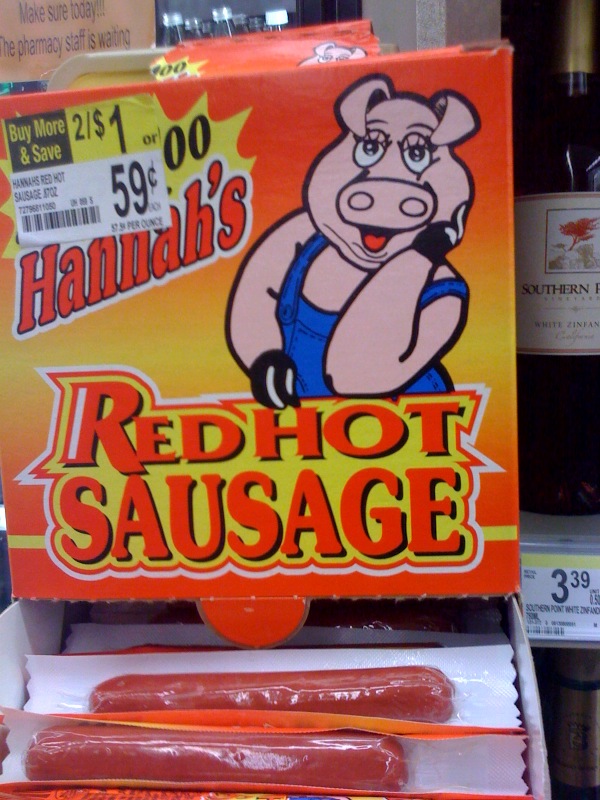 [...] bizarre/creepy/awesome is that? I really don’t understand ads that sexualize foods. Maybe I’m weird, but looking at the food on my plate and thinking about it in all kinds of [...]

[...] added another image of sexualized food to this post, this time the cow used to advertise Skinny Cow ice cream (scroll all the way to the bottom). [...]

[...] in sex sells, we updated our post on the sexualization of food, this time with a Max Factor ad and a not-to-be-missed Hardee’s commercial featuring Padma [...]

[...] should all invest and be invested. You might compare these to some of the images in our post about sexualizing food that come from Carol Adams’s website. tags: animals/nature, beauty, bodies, gender, [...]

I wonder how http://www.youtube.com/watch?v=zbKRSYAuSNg fits into this business.

[...] Moving on to creepily gendered products, we added a photo of the storefront of Sweet Taters Cafe, sent in by Dmitiry T.M., featuring a “hot” potato, if you get my drift, to our post on sexualized food. [...]

The first Doritos ad is a reference to a soap opera, "Sin tetas no hay paraíso" (no boobs, no paradise). The odd title means that a girl who wants to be the lover of a drug dealer must get silicon implants and the show denounced, rather than condoned, that lifestyle. So, "No Doritos, No Paradise" is a very weird thing to say.

[...] collected many images of the gendering and sexualization of food, where foods are turned into sexy female bodies or are shown alongside sexy women. Miriam sent us a [...]

[...] Update: Numerous examples of the sexualizing and/or gendering of  food in Western advertisements are available here. [...]

Obviously, most of these barely even make sense, but the the Kenneth Cole ad in particular stands out. Seriously. None of the elements relate to each other... or to shoes.

Let's see, we've got:
- A pun on "raise some hell" (wouldn't you expect a party scene? or hell? or horns on the shoes or something?)
- Sushi (I'm going to assume that's meant to be visual code for "sophisticated" or "cosmopolitan"?)
- A man's hand holding chopsticks (so... men will want to eat your feet? also, why does the hand have to be there at all?)
- Shoes/feet on a plate right next to food (an instinctively gross image for most people.)
- I'm sorry, I have to go back to that pun: what does it have to do with the image??

I don't get it.
They Skyy ad is similarly stupid, but at least the random not-related-to-naturalness shoe is lemon yellow!

[...] Update: For comparison, numerous examples of the sexualizing and/or gendering of food in Western advertisements are available here. [...]

[...] might be an interesting addition to some of the images in this, this, and this post about the sexualization of food. Whereas the women in those instances are mostly explicitly [...]

What about the Green M&M?

Unfortunately, I know where Quickie Burger is- it's in the next town over and I used to see it all the time when I bussed out of work. It always bothered me, for reasons I can't seem to articulate.

But the whole collection of pics definitely puts me off meat.

Commodifying the Women’s Movement « Beauty and the Beast — February 4, 2010

[...] Sexualizing and Gendering Food is another interesting one and it’s got dozens of examples of how foods are created or advertised in overtly sexual ways, or that give the food a specific gender. One of the more horrifying ones outlined a woman’s body as different cuts of meat and while this is no new trick, I can still never get over the division of women into pieces for sale. It happens all the time, but that doesn’t mean I have to like it! A lot of these are very shocking and several are surprisingly sexual. You have been warned. [...]

Can you tell me where you found that 1960's advertisement of the woman quartered into meat cuts? I'd love to try to find an original copy for a project.

[...] One example of the pervasive sexualization of beer is the ubiquitous personification of “blond” ales as blond women.  Tom Megginson at Change Marketing made this observation and collected a number of examples of this particular example of the gendering and sexualizing of food: [...]

Wow. I have something of a food fetish, so I thought I’d be turned on by these. Instead, I’m horrified and disturbed! Good job on collecting all these!

Re: the fast food ads: it's kind of nice to see women enjoying heavy, greasy food portrayed in a positive light. It would be nicer if it wasn't necessary to connect said food with male genitalia and/or bodily fluids to make it acceptable.

When my sister was in high school, she had to do a presentation for English class on metaphor. Twin Peaks was on at the time, so she did 45 minutes of "food is sex", using a VHS "reel" edited to show some 20 examples from that series. Some examples were: "damn fine coffee", cherry pie, and a smoked cheese pig. It was hilarious, because it made so much sense.

All this to say that while many of the above examples are tasteless, the conflation of hunger and lust is pretty fundamental.

I think you need to get out more.

Congratulations, you have wasted your time.

And this Black Books clip seems to be parodying the whole thing:
http://www.youtube.com/watch?v=pJqWjMNAeGs

Here's another near my hometown in cape breton, nova scotia canada

You know, all those sausage ads should have a man in them. The shape sort of somes comes naturally to them..

I love the girl/map drinking. She's actually doing what you're supposed to do with a drink (and showing her breasts, yeah).

if someone hasn't already posted this:

[...] have a tendency to sexualize food. The New York Times chicken, a particularly frothy Herb Alpert album cover and even fish sticks [...]

An example of one of the lamb ads

[...] very manly. Meat is marketed at men in a way to reinforce their heterosexuality by making it as deliciously sexy as possible. Meanwhile, salad is girly. Salad is for women to eat while laughing alone.* We’re also [...]

[...] objects can be bought and sold, and some images portray women as everyday commodities. Conflating women with food is a common sub-category. This PETA ad, for example, shows Pamela Anderson’s sexualized body [...]

[...] it casually and in a largely unassuming way objectifies women. The argument has been made for the sexualization of food but what about the other way; the food-ization of the sexes? [Yes, I made up a word. Deal with it]. [...]

These images made me nauseous.

[…] a means to an end.  This is often the case in magazines and commercials when women are dressed as food, striped, or overly […]

[…] they are. Of course, her work is not sexualizing the female body-as-meat the way it is so often in pop culture, it is ripping it apart like a pack of wolves or a serial killer. I have not yet met a woman who […]