Why Do We Sexualize Chicken?

The Sexual Politics of Meat is a scathing, powerful analysis of the relationship between the oppression of women and the farming of animals for food.  Written by Carol J. Adams and published in 1990, it inspired many a feminist to choose vegetarianism and made many more take pause.

In the six-and-a-half minute video below, she discusses the sexualization and feminization of chicken specifically.  She shows lots of examples of the ways in which chicken carcasses are objectified as women: put in high heels, bikinis, sexual positions, etc.  We feature many examples of this at our Pinterest board collecting gendered and sexualized food, some of which we’ve borrowed from Adams. 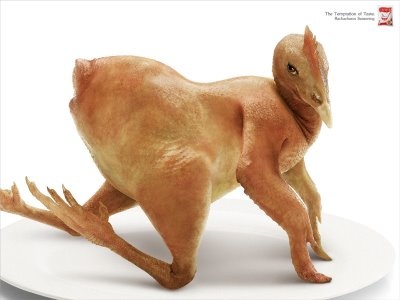 Adams then argues that this is a way to distract us from the fact that we are eating the flesh of an animal that has been killed for us. She writes:

By sexualizing animals, we trigger another thing, that uneasiness becomes sexual energy… and everybody knows what to do about sexual energy.  You can laugh at it, you can talk about it, it reduces whoever is presented to an object.  And so it makes it okay again.

So the sexualization of animals enters into and participates in the wider issue of “Why are we doing this to animals?”  Oh yeah, because it’s funny, because it’s fun, because we can have fun with it. And it takes the ethical out.

Moreover, presenting chicken as dressing up for the male gaze suggests that the animal wants to be consumed.  The animal appears to desire to inspire (culinary) lust and, accordingly, it’s okay if you eat her.  This works best alongside feminization, as it is women who are typically presented as objects of a lustful male gaze.

Bonus: Fifty Shades of Grey makes an appearance, and not incidentally.   In response to its popularity, a book was published called Fifty Shades of Chicken.  Here’s the book trailer:

Adams call Grey a “regressive book that implied that despite all the advances feminism has made, women really just wanted to be in bondage.”  In both books, she argues, we’re seeing the “packaging and sexualizing [of] dominance over another being.”

Hear it straight from Adams, via Uncooped:

YES! About time you guys covered this! Check out my website http://www.veganfeministnetwork.com for more information on the intersections of gender and species :)

There is a lot to be said for the fact that when anthropomorphic livestock are gendered as female, it's usually in a prurient, sexualized way, but never so when they are male or non-gendered. There's plenty of sex=female going on here.

And yet, when it comes to meat products being depicted as characters, the vast majority of examples are not specifically female. The anthropomorphic chicken is such a ubiquitous image that you can find a chicken costume almost anywhere. Countless fast-food joints incorporate such an image into their logos and advertising. In the absence of identifiable "sexual politics," the images still have the same effects and motivations that Adams describes.

I think she'd have a much stronger point if the sexualized-chicken were used for demonstrably different purposes then the generic cartoon-chicken. But in the eagerness to converge the feminist agenda with the animal-rights agenda, she's rather blatantly cherry-picked the data.

My goodness, that 50 Shades of Chicken video is so disturbing I couldn't finish it.

Sexualized violence against females, created for and likely by men. Same as usual.

We can also see that egg laying hens and dairy cows are far more of a culturally-conscious/commonly-depicted type of slavery vs something like veal, albeit in constantly-cartoonified form.

After taking a look at this post as well as Carol Adams' posts on her blog, I've discovered things I've never known before. Yes, I have recognized that chicken (as well as other kinds of meat) have been sexualized but I did not let it go through my head. This may seem strange especially the fact that I, myself, am a vegetarian feminist. This article has given me a new outlook on how society sexualizes animals. I know for sure that many commercials and such use women as objects in order to get their businesses to succeed. This has given me a totally different perspective on life in general, especially when it comes to being women in today's society. What kind of society do we really live in today? Why are we still being degraded by rest of the population? We should be considered equal, intelligent, capable, and so forth.

I am not a vegetarian, but have always found meat ads to look pretty disgusting. Dressing it up to look sexy, if this is now what passes for sexy, isn't doing it for me!

[…] Extra: This is a sociology article and video about how we sexualize raw meat in advertisements. There&#8217… […]

Links for Video Three- Search in Progress and Ongoing | Video in the Expanded Field — November 28, 2013