“They were coming to college believing that all Indians are dead,” said education professor Sarah Shear of her experience in the classroom.

Her students’ seeming ignorance to the fact that American Indians are a part of the contemporary U.S., not just the historical one, led her to take a closer look at what they were learning. She examined the academic standards for elementary and secondary school education in all 50 states, these are the guidelines that educators use to plan curricula and write textbooks. The results are summarized at Indian Country.

Shear found that the vast majority of references to American Indians — 87 percent — portrayed them as a population that existed only prior to 1900.  There was “nothing,” she said, about contemporary issues for American Indian populations or the ongoing conflicts over land and water rights or sovereignty. Only one state, New Mexico, even mentions the name of a single member of the American Indian Movement. 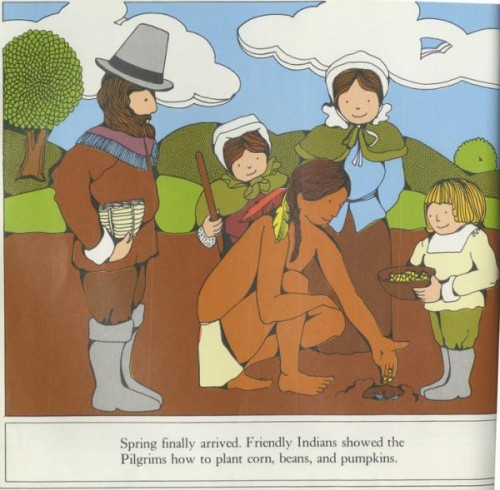 Meanwhile, the genocidal war against American Indians is portrayed as an inevitable conflict that colonizers handled reasonably.  “All of the states are teaching that there were civil ways to end problems,” she said, “and that the Indian problem was dealt with nicely.”  Only one state, Washington, uses the word genocide. Only four states mention Indian boarding schools, institutions that represent the removal of children from their families and forced re-socialization into a Euro-American way of life.

The fact that so many people absorb the idea that Native Americans are a thing of the past — and a thing that we don’t have to feel too badly about — may help explain why they feel so comfortable dressing up like them on Halloween, throwing “Conquistabros and Navahos” parties, persisting in using Indian mascots, leaving their reservations off of Google maps, and failing to include them in our media. It might also explain why we expect Indian-themed art to always feature a pre-modern world.

Curricular choices matter. So long as young people learn to think of Indians no differently than they do Vikings and Ancient Romans, they will overwhelmingly fail to notice or care about ongoing interpersonal and institutional discrimination against American Indians who are here now.

Very interesting. My personal primary school education was definitely biased towards the "people who existed in the past," but the message was much more that we should all feel horribly guilty for the sins of our fathers who massacred these "noble savages." It was taught as a cautionary tale of the horrors of the modern white man.

Neither of these views really respect the various native nations as people and cultures of their own, with their own virtues and sins.

Link to the Google Maps post is not working.

do you not— do you really not— know how stupid what you just said is? i'm speechless. breathless, actually. i'm referring to this, this unbelievably obtuse comment:

.....may help explain why they feel so comfortable dressing up like them on Halloween, throwing “Conquistabros and Navahos” parties, persisting in using Indian mascots.....

YOU HAVE JUST RECONTEXTUALIZED THE PROBLEMS OF THE AMERICAN INDIAN COMMUNITY AS WHATEVER INCONVENIENCES & EMBARRASSES THE WHITE MIDDLE CLASS.

you dont see that? you dont see that the REAL PROBLEM as far as universities & members of tribal communities is that THAT THERE ARE SO FEW OF THEM AT UNIVERSITIES AT ALL, that so many have been DISENFRANCHISED from the "best" in american education* & that AINT COS THEYRE WORRIED ABOUT IDIOT FRATERNITY COSTUME PARTIES.

HAVE i MADE MYSELF CLEAR.

take yr head out of where it seems permanently lodged, then MAYBE you can help the rest of the white bourgie population drag their heads from the exact same places theyve proudly shoved them too. until then, a smidge—just a smidge—of research & identification w/ something that is not yr own self might do you some good. might. if it's possible.

* aka dreamworlds of middle class networking. at best.

I went to grades 7-12 in Oklahoma and I had a sibling in early-elementary. Secondary school, the only times Native Americans came up was in Oklahoma history, a bit in early American history, and, iirc, a mentioning of the code-talkers for the war. I can't remember much about how that was taught, except that, on a scale of 0(horrible) to 5(wonderful), I'd give it a 3. Nothing great, but slightly above average in how the things it taught were presented.
Technically speaking, I don't guess we were taught about any current or recent (say, within a few decades) tribal affairs. But our history class didn't manage to get up to the Vietnam War.

In any case, whatever was officially taught, it'd be an awfully insulated student not to hear about current events regarding various tribes, news of that being common in the media. And it's hard to think Native Americans are a thing of the past when at least a tenth of the class is "[American] Indian" enough to officially count. (Those and more claim.) You don't think all Indians are dead when you know your science teacher's tribe.

Second-hand, I know some things taught in elementary school were terrible. In older grades, the Land Run was presented as the government breaking yet another promise, and doing something that turned out to be a horrible thing for pretty much everyone. (When you're having people literally compete for the best land, violence shouldn't surprise you.) In elementary school, the Land Run was presented as a great, exciting thing and was reason for a field day. On the anniversary of a land run (probably April 22, 1889), they had the kids present (positive) Land Run projects and then everyone went outside to play Land Run. Ride the little horses they made and/or stream ribbons and go claim their piece of the playground. That is common at schools here, even with a significant native population of both students and staff. Bit mind-boggling.

In a "White and Black"Only Center America .Native cultures and others Have no VALUE.

I think public school curriculum in Washington State is a lot more comprehensive of native american issues than that of other states. In elementary school, we toured historical native sites and had tribal members teach us how their ancestors lived before the white man came. This is probably due to a number of factors, including that we have a large native population that resides close to other populations, the people of washington state are largely more progressive than in other states, etc.

Genocide has been a factor in establishing superior societies for years. Was it at the expense many others, yes. However, this method was not uncommon for colonizers, and there shouldn't be any shame in explaining basic history. Also, there isn't anything wrong with portraying historical figures or tribes. Pretty sure it's still legal. Can't let your feelings lead the charge on your rational, people.

Out of all the imagery present on the internet, I feel as if sociological images present the greatest value. An ad of the same was posted at https://www.nerdywriters.co.uk/ and from there I saw such an image. It really was a fascinating view.