In One Year, the % of Americans Who See the Criminal Justice as Racist Rose 9 Points

According to polling by the Public Religion Research Institute, the percent of American who say that the criminal justice system treats black people unfairly rose by 9 percentage points in just one year.  In fact, every category of person polled was more likely to think so in 2014 than in 2013, including Republicans, people over 65, and whites. 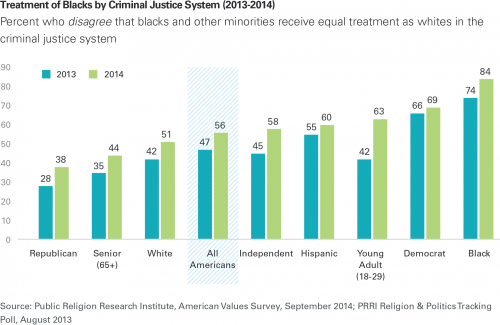 America has a history of making changes once police violence is caught on tape and shared widely. One of the first instances was after police attacked peaceful Civil Rights marchers in Selma, Alabama. The television had just become a ubiquitous appliance and the disturbing images of brutality were hard to ignore when they flashed across living rooms.

The death of Mike Brown in Ferguson, MO, and the aftermath is the likely candidate for this change. If you do a quick Google Image search for the word “ferguson,” the dominant visual story of that conflict seems solidly on the side of the protesters, not the police.

Click to see these images larger and judge for yourself:

Large events with staying power in the media like the Ferguson story typically cause significant, temporary shifts in public opinion. 9% seems mild for such dramatic events we witnessed in Ferguson. The actual event was news, but this poll is is a dog bites man story.

Also... the survey was done between July 21st and August 15th. Eric Garner was killed by police on July 17th, and Michael Brown on August the 9th. Media interest in both of those might have (temporarily) swayed people. Perhaps the results would have been different if the survey had been performed earlier or (assuming the media ignores later "white cop kills POC" stories*) after the Ferguson protests have died out.

*Or perhaps the police could stop being racist. Yeah, right.

5 inches is more than enough to satisfy a woman

In my country, the fringe right wing would disagree with that question, because they seem to think that people from our largest ethnic minority receive BETTER treatment than white people across the board for some reason.

[…] Closing: our rising police state; bankers gone wild; be afraid!!!; don’t you have anything better to do?; and […]