This has been a hard week.  Another young, unarmed black man was killed by police. The Root added Michael Brown’s face to a slideshow of such incidents, started after a black man named Eric Garner died after being put in a chokehold by officers less than one month ago.  This week’s guilty verdict in the trial of the man who shot Renisha McBride left me feeling numb.  Nothing good could come of it, but at least I didn’t feel worse.

The shooting of Michael Brown, however, is still undergoing trial by media and the verdict is swayed by the choices made by producers and directors as to how to portray him. When Marc Duggan was killed by police earlier this year, they often featured pictures in which he looked menacing, including ones that had been cropped in ways that enhanced that impression.

Left: Photo of Duggan frequently used by media; right: uncropped photo in which he holds a plaque commemorating his deceased daughter. 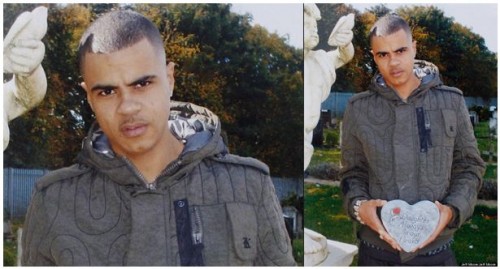 As the media coverage of Brown’s death heated up, the image that first circulated of Brown was this: 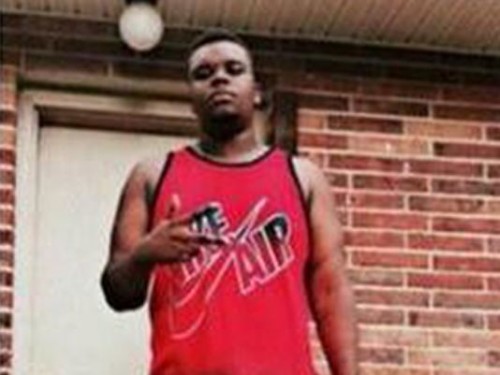 Reports state that this was his current Facebook profile picture, with the implication that media actors just picked the first or most prominent picture they saw.  Or, even, that somehow it’s Brown’s fault that this is the image they used.

Using the image above, though, is not neutrality.  At best, it’s laziness; they simply decided not to make a conscious, careful choice.  It’s their job to pick a photograph and I don’t know exactly what the guidelines are but “pick the first one you see” or “whatever his Facebook profile pic was on the day he died” is probably not among them.

There are consequential choices to be made.  As an example, here are two photos that have circulated since criticism of his portrayal began — the top more obviously sympathetic and the bottom more neutral: 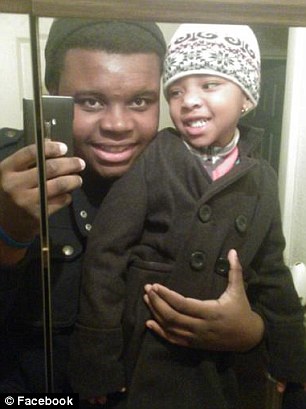 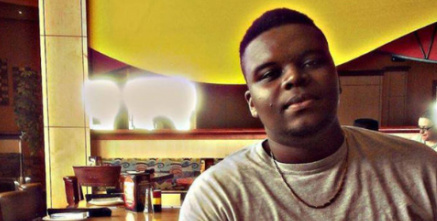 Commenting on this phenomenon, Twitter user @CJ_musick_lawya released two photos of himself, hashtagged with #iftheygunnedmedown, and asked readers which photo they thought media actors would choose.

Top: Wearing a cap and gown with former President Clinton; bottom: in sunglasses posing with a bottle and a microphone. 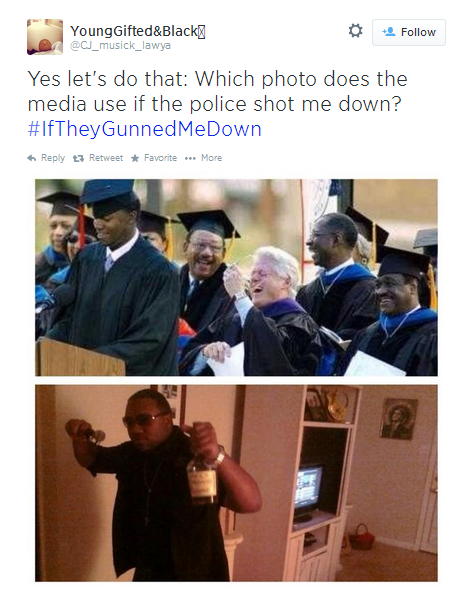 The juxtaposition brilliantly revealed how easy it is to demonize a person, especially if they are a member of a social group stereotyped as violence-prone, and how important representation is.  It caught on and the imagery was repeated to powerful effect. A summary at The Root featured examples like these: 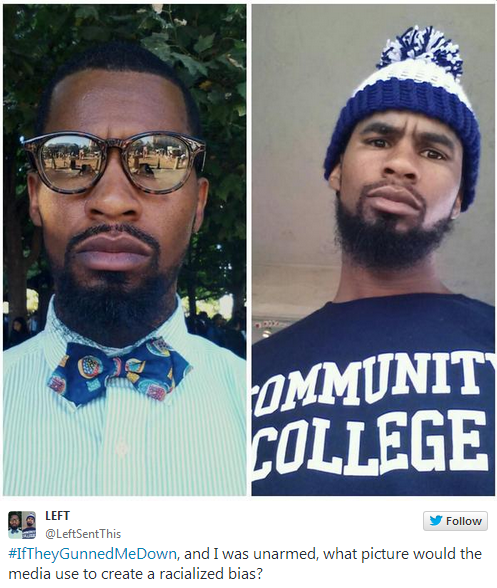 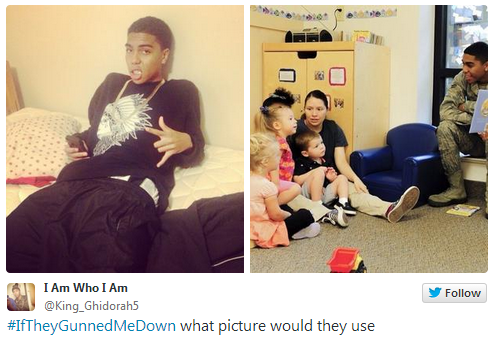 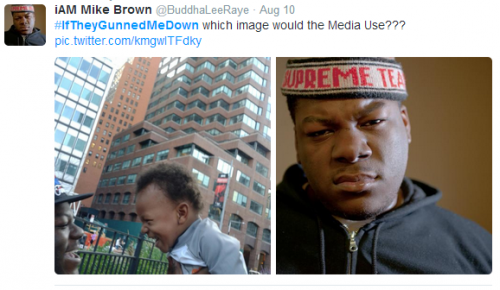 The New York Times reports that the hashtag has been used more than 168,000 times as of  August 12th.  I want to believe that conversations like these will educate and put pressure on those with the power to represent black men and all marginalized peoples to make more responsible and thoughtful decisions.

Marc Duggan was killed three years ago, not earlier this year.

I am almost as wary of "the free press" in 21st century America as I am of our politicians. Both groups are essentially anti-intellectual with self-serving agendas driving their behaviors.

I don't see how you avoid potential political interpretations of every single published photo other than just not using photos at all. And this seems in line with current practices in a lot of media where race of perpetrators is no longer identified. For example, the term "teen" seems to have become almost a running joke in crime reporting.

The hashtag is e-activism done right. But it's important to note that some particularly despicable (mostly white people ) have attempted to hijack the hashtag by mockingly posting pictures themselves or just shaming those in the hashtag with respectability politics. But do far, the original message of the hashtag is still coming through.

Oh, there are many shareholders Kali... Unions, organized religions, special interest groups, wing nuts from the left and the right, foreign countries, you name it.

Oh, there are many shareholders Kali... Unions, organized religions, special interest groups, wing nuts from the left and the right, foreign countries--friends and foes, you name it.

Meanwhile, white people whose lives are cut short are illustrated with angelic pictures by the same people who choose to incriminate black people through these examples. Just makes you lose faith in humanity.

[…] linking Brown to a minor robbery, an incident that had nothing to do with the shooting. The hashtag #IfTheyGunnedMeDown offered powerful examples of how easy it is for the media to cherry pick photos that fit people’s stereotypes and a […]

[…] you guys heard of the hashtag #iftheygunnedmedown?  It’s […]

Gee... maybe the rule should be for Blacks (whom are clearly too stupid to figure out the obvious unless someone like me says it plainly) -- "DON'T POST PHOTOS THAT MAKE YOURSELF LOOK LIKE A CRIMINAL OR A FOOL."

Gee, did I even have to expend 3 IQ points of mental processing to even state that? It is as fricking obvious as the lips on your face.

What's wrong with posting a picture of the "victim" they way that they most likely appeared when they were killed? Video footage taken from the C-Store clearly showed MB dressed and acting like a thug. MB saw fit to put an image of himself acting like a thug and flashing on FB. That is how he chose to represent himself to the world. I got sick of seeing the baby pictures of Trayvon Martin every time his death was mentioned. Media fans the flames and incites these riots by pushing the image of a black baby being gunned down by "creepy azz crackas" Show a picture representative of what the assailant saw, not some baby pic. For realz y'all.