Last week the controversial killing of 29-year-old Mark Duggan by police in North London was ruled lawful by a jury.  His killing sparked riots across London and elsewhere in England.  To many, it seemed like another unnecessary killing of a young man found prematurely guilty in the minds of police by virtue of the color of his skin.  While the court case is over, many still believe that Duggan was murdered without cause.

In the meantime, the news covered Duggan’s case quite extensively and, while there is a lot to say, here I want to draw attention to how the story was illustrated.  A Google search for his name offers a glimpse into the many faces of Duggan, as uploaded by the media.   Outlets choose which to picture to include, ranging from a smiling face with cherubic dimples (upper left), to a  posturing blue “hoodie” photo (bottom left), to the stoic stare with a knitted brow (upper right hand corner).

Each of these, together with a headline, potentially leaves the reader with a different impression.

Cropping matters too.  You might notice that third image from the left in the top row is a cropped version of the bottom right.  Two other frequently used photos were also cropped.  All exclude connections to others: a visit to a grave site, a plaque commemorating a daughter (“Always in our hearts”), and a baby in his arms. 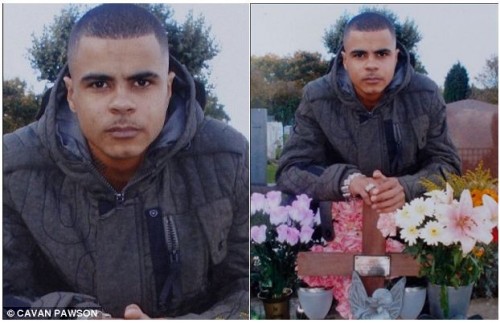 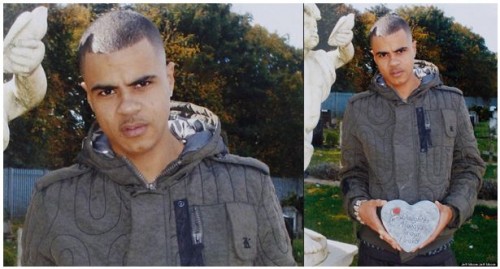 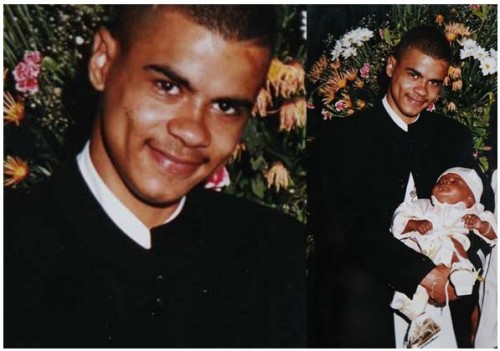 It may make journalistic sense to exclude context and focus on the individual.  Likewise, I don’t know why some photos were chosen over others and surely there are factors that I’m unaware of.  So, I don’t mean to criticize the media agents making these decisions.  I do want to draw attention, though, to the fact that these decisions are being made.  And they inevitably color our reading of the news stories they accompany.

Interesting. Like you said, there are many more factors that go into selecting and cropping a photo than what we're aware of...yet, it's worth thinking about that, when viewed in context, each of these photos serves to humanize him. It's like they cropped out his humanity so we could get a better look at his face.

The lesson that I see reinforced is that the police (of any country) are seldom found guilty of misconduct when it comes to their treatment of civilians.

Regardless of the assumptions people make about Dugan the real truth of this case boiles down to the police have once again shoot and killed an unarmed man . It's to easy to say he was a criminal who was armed blah blah. But the facts remain that for years the police have been breaking the law and the reason for this is they have become above the law. How can you be paid to uphold the law and at the same time break it. The police are no longer part of society and view them selfs as a force better than normal society forgetting it is us they serve. It has become them and us. Look at the powers the police are constantly requesting and being giving. Now look at the powers to investigate the police. The so called IPcc is A joke run by police to investigate police. The police in the Dugan case have refused to cooperate and answer questions from the ipcc. So what use is the ipcc if they don't even have the power to make the police we pay for answer questions. The bottom line is the police break the law all the time and even if caught it will be covered up and they take early retire. And that is why people don't trust them . Rather. Than out the bad apples in there force they protect them and thus send out the message they are above the very law they are paid to uphold, one law for police and another for us.

This happens constantly. I suppose its sometimes innocent, perhaps when there are a limited number of available photos and time is tight. But reporters signal their bias routinely by the photos they use, often selected from hundreds taken at a single event.

Try to find a flattering pic of one of the Clinton's on the cover of the NY Post. Try this: http://www.huffingtonpost.com/2013/01/24/new-york-posts-hillary-clinton-cover_n_2541614.html

Unfortunately this is just business as usual in what we're supposed to call "journalism" these days.

The image cropping makes me feel quite angry. Context is everything in the media and they have contextualized not to illuminate the character of the person but to illustrate a story and the weighting that they wish to give it. They are clearly trying to paint a picture of this fellow not as a victim but as a perpetrator.

Journalists at the moment are constantly re-framing stories for fiscal reward, I suspect this is the case far more so than in the recent past. Newspapers in the west are under financial pressure, but my suspicion is that it is pressure being bought to newspapers by the Government and its institutions which are putting pressure on journos and newspapers to have a negative slant against those that the state has excluded (or in this case executed) and tow the line of the dualistic ''status quo'' - "us vs them", good vs bad, "black vs white".

What Is Photography? What’s behind the image? Extended essay | elangleycts — May 22, 2014

[…] this year, they often featured pictures in which he looked menacing, including ones that had been cropped in ways that enhanced that […]