Eyelid surgery is the third most common cosmetic procedure in the world.  Some are necessary for drooping eyelids that interfere with vision, others are undertaken in order to enable people to look younger, but many people choose these surgeries to make their eyes look more Western or whiter, a characteristic often conflated with attractiveness.

Recently Julie Chen — a TV personality and news anchor — revealed that she had undergone eyelid and other surgeries almost 20 years ago in order to comply with the standards of beauty and “relatability” demanded of her bosses.  She released these photos in tandem with the story: 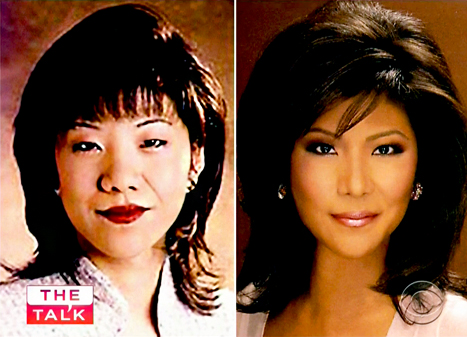 Ultimately, though, Chen was under a lot of pressure from her bosses.  One told her “you will never be on this anchor desk, because you’re Chinese.” He went on:

Let’s face it, Julie, how relatable are you to our community? How big of an Asian community do we have in Dayton? ‘On top of that, because of your heritage, because of your Asian eyes, sometimes I’ve noticed when you’re on camera and you’re interviewing someone, you look disinterested, you look bored.

Another man, a “big time agent,” told her: “I cannot represent you unless you get plastic surgery to make your eyes look bigger.”

A lot of victim-blaming in the comments to that article.
Whether it is foot-binding or FGM or cosmetic surgery, we are quick to blame and shame the ones who give in to these economic pressures (parents who force it on the kids or adults who make the "choice"), but we overlook and/or excuse those who create those economic pressures - the ones in power demanding this for their own pleasure.

I read this blog often and really enjoy how so many sociological phenomena are presented and discussed here. Thank you for your great inputs! It is appalling how much value is put on appearances, and the amount of energy devoted to "looking good", especially in the United States. This kind of pressure to meet a certain standard happens far more often to women than to men.Hopefully with the growth of diversity, as well as confidence-building in women of this and the next generations, it will no longer be the case.

On a side note, not to be critical but but to point out something that is a common mistake, on the sentence “you will never be on this anchor desk, because your Chinese.”, "your" needs to be replaced by "you're". :)

This isn't about "looking right". The last example is straight up blackmail and the rest are thinly veiled threats.

One would think from reading this post that the homo sapiens sapiens emphasis on male and female attractiveness was the result of Democrats smoking pot in the 1960s. Check out about 2,000 years of reaction to Cleopatra or Phryne.

As vile as the casual racism of Chen's bosses was, it does seem a bit of a stretch to argue that her surgery was driven by "economic pressures." Chen would have certainly been qualified to hold other well-paying work in which demanding plastic surgery would have been unthinkable. Rather, her decision was driven by the ambition to have a career in a visual medium, where others' perceptions of your looks have vastly more weight than your skills. Her particular position would have already excluded applicants who don't have the "correct" weight, height, age, or any other qualities that can't be adjusted by surgery.

Is it any less of an outrage that people are denied the anchor chair on TV networks because they're unattractive? Or is having the job within reach but at a large personal price worse than having it out of reach altogether?

I hate to be this person but the grammar in this post is terrible. You should definitely get someone to review your posts for common errors before publishing. It just takes away from the point of the article, which is an absolute shame because this is an extremely important post for those interested in race/gender and how they intersect one another. It also shows how important beauty is when it comes to its role in media...

[…] Julie Chen Explains Why She Underwent “Westernizing” Surgery | The Society Pages “Another man, a ‘big time agent,’ told her: ‘I cannot represent you in less you get plastic surgery to make your eyes look bigger.'” […]

I dated a news reporter, she got implants after I was sort of against them. Post-op her personality, morals, and intelligence went away. She ended up screwing some married man while on assignment and tried to make him leave his wife and kids. I've lost all respect for main stream reporters. I think they're nothing but idiotic self obsessed vanity talking heads told to what to say and are absent of a brain. I rather date an emo drug addicted hooker that has a real soul looking back, I would have been better off!

Asian women are westernizing, while european would like to look more exotic like Asians or Mulattos. This is woman nature :)

There is four types of version in the games online then it will be played in your system and this game doesn't demand the high graphics to play this play fireboy and watergirl game and this is the most latest version of the game that i have suggest to you that play the games.

The article you share here is awesome. I really like and appreciate your work. I read your article deeply, the points you mentioned in this article are very helpful thanks for sharing.

I have read and read a lot of your posts, great, your article has a good and very useful content, thank you for sharing.
vex 3