The  International Society of Aesthetic Plastic Surgeons has released new data on the incidence of invasive and non-invasive cosmetic procedures.  The U.S. leads in sheer numbers of procedures but, accounting for population, we fall into 4th place.  South Korea leads for the number of procedures per person, followed by Greece and Italy. 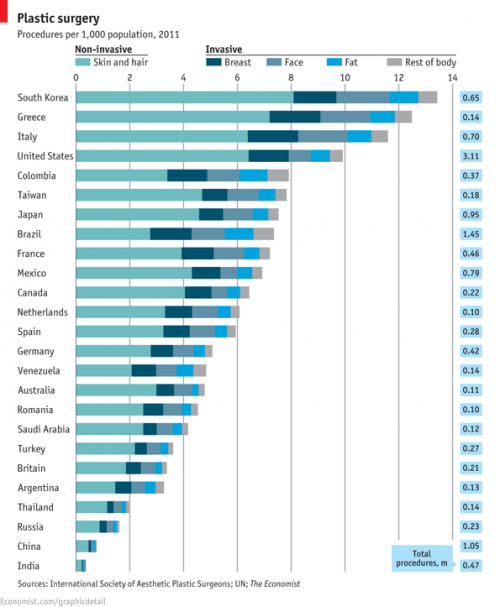 By far the most common kinds of surgical cosmetic procedures are lipoplasty and breast augmentation.  Along with fat, breasts seem to be a particular concern: breast lifts and breast reductions for both men and women are also in the top ten.  Abdominoplasty, nose jobs, eyelid surgeries, and facelifts are as well. 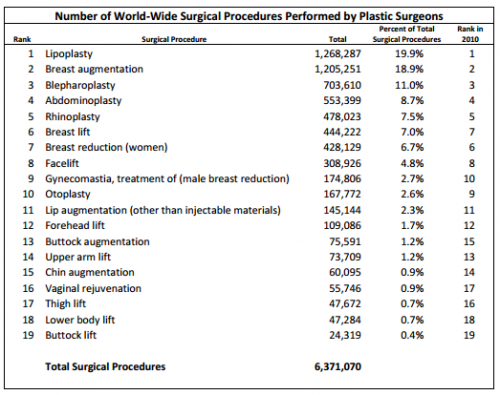 The incidence of these surgeries is strongly related to everything from the gender binary to global power dynamics.  In 2008 we reported that male breast reductions were the most common cosmetic surgery for 13-19 year olds (boys and girls combined). You would be shocked at what counts as excess breast tissue and how little the before and after photos look.  Boys and men getting breast reductions, alongside women getting augmentations, is obviously about our desire for men and women to be different, not naturally-occurring difference.  See The Story of My Man-Boobs for more.

Likewise, we’ve posted about surgeries that create an epithelial fold, a fold of skin in the eyelid more common in people with White than Asian ethnic backgrounds.  This surgery is a trend among Asians and Asian-Americans, as colonization has left us with an association between Whiteness, attractiveness, and power.

The Economist summarizes some other trends:

Breast augmentation, the second biggest surgical procedure, is most commonly performed in America and Brazil. Buttock implants are also a Brazilian specialty, as is vaginal rejuvenation. Asia is keen on nose jobs: China, Japan and South Korea are among the top five nations for rhinoplasty.

More on where and how many procedures are being performed, but nothing on why, at the ISAPS report.

Image at The Economist; via Global Sociology.

Was south korea more colonized than other places where eyes lack an epithelial fold?

"Boys and men getting breast reductions, alongside women getting augmentations, is obviously about our desire for men and women to be different, not naturally-occurring difference."  We know man boobs are natural because they are a natural global phenomenon  among people who are still eating and living pre-industrial, tradition lifestyles (or as close to that as possible).  That darn artificial gender binary is something the power elite have been trying to force on the world for 10s of thousands of years as can be attested by linguists familiar with ancient languages that insisted on gendering both animate and inanimate objects.  When will we realize that its just an exceedingly ancient, tenaciously lasting, widely adopted but, nonetheless, artificial construct designed to...do something bad to....someone.

Does medical tourism account for these numbers at all, or do these statistics only count residents of the countries?  A lot of countries in the top 10 have a lot of medical tourism specifically for cosmetic surgery.

It's "epicanthic", and the surgery removes it.

Incorrect. Many East Asians have double eyelids, and it has been admired as beautiful long before we ever met white people.

Keep your sociology and race guilt far, far away from us. Thanks.

What is non-invasive hair and skin plastic surgery?

"Boys and men getting breast reductions, alongside women getting
augmentations, is obviously about..."

Uh, okay. Any statistic comprised of the many actions of disparate individuals is OBVIOUSLY the result of one factor. Way to practice the type of generalization that is the enemy of truth.

As a man with breasts that are far more pronounced than those shown in the examples you linked, I have often been curious about reduction and have long hoped that the remedy is more exercise. That your post ascribes a less-than-valid reason for the surgical remedy is offensive, and confirms my view of your form of sociology as far lower than scientific.

How do you determine which of these surgeries are "cosmetic"? My doctors have talked to me about breast reduction surgery, because I am having back problems. In a horseback riding accident, a friend's face was torn off at the right jaw and was reconstructed with plastic surgery. My sister had plastic surgery at the age of 2 to repair a cut (through the muscle) that stretched from her mouth to her cheekbone.

I don't dispute that the vast majority of surgeries are cosmetic, but it's also possible that these estimates are inflated by people getting the same types of surgery for basic function.

As someone who had male breast reduction surgery, it anything but minor. I had straight-up boobs as a teenager for the same reasons men who use steroids sometimes develop breasts - extremely high testosterone levels, even for a teenage boy, that led to aromatization of testosterone into estrogen. They made life hell and made wearing normal clothes next to impossible. Several pounds of material was removed, and the before-and-after pics were quite dramatic, unlike the linked pictures. Getting those things off was one of the best things I ever did.

While there are certainly any number of examples of Western/White body aesthetics being exported to Non-Western/Non-White cultures, and of plastic surgeries designed to bring people closer to the white aesthetic, the Asian eyelid surgery is a poor example.  The theory that the surgery is about conforming to white standards is questionable at best. Here's a good article that gets into a lot of detail about the issue:
http://www.fashionwindows.com/fashion_review/2000/eyelid_surgery.asp

The quick overview is that while some people (including some prominent Asian-American thinkers) are concerned that it's about internalized racism, many Asians (up to 70% in Southern China) are born with double-eyelids, and the Asian double-eyelid looks significantly different from the Caucasian double-eyelid. Good double-eyelid surgery doesn't result in white-looking eyes, but rather in eyes that look like naturally-occurring Asian double-eyelids. That's an important distinction. One Hawaii-based plastic surgeon interviewed says: "It used to be that Asian girls, especially
immigrant girls, were requesting the Westernization procedure. They wanted to look Caucasian.
But now what they're requesting is a procedure to enhance the double eyelid while maintaining
the other characteristics of the Asian eye."

This article is also quite interesting:
http://www.academia.edu/726850/Gender_Globalization_and_Cosmetic_Surgey_in_South_Korea

In their introduction they say: "Existing research on cosmetic surgery in Korea frames cosmetic surgery primarily in two ways - either as an undesired effect of Western cultural influence or as a feminised issue evidencing women's continued subjection to patriarchy. However, this research questions these simplistic explanations. We will show, using contemporary South Korea as an example, that the meanings and practices of aesthetic surgery represent a process of negotiation between multiple discourses concerning national identity, globalised and regionalised standards of beauty, official and nonofficial religion, traditional beliefs and practices (albeit in some instances historically imported from some other place), as well as the symbolic practices of coming of age, caring for the self, marking social status and seeking success. All these considerations frequently intersect with (and occasionally contradict) each other. We argue that foregrounding cosmetic surgery as only feminine or culturally imperialist practice is a key weakness of the existing literature and produces only partial accounts of national cosmetic practices."

All people want to look more attractive among friends and family member. That why they go for plastic surgery. Plastic surgery is great because it give new look to person. http://www.uribemorelli.com/

It is interesting that Brazil seconds the US in breast augmentation.

[…] as 50% of Koreans have them (although in my experience, little to no evidence is ever provided for any figure—even by […]

How Botox Treatments Work and Where to Get One | RSS Feeds For Website — August 14, 2014

[…] of their skin but want to avoid needles and surgical options. What is a Chemical Peel Treatment? A chemical peel products improve the look of skin through the use of a chemical solution. This solution peels away the outer layer of the skin, leaving a […]