1954 and the Fantasy of Friendship

Ads are always selling more than just a product. They’re selling a fantasy.  In this case, buy Ballantine Ale and you’ll get this: 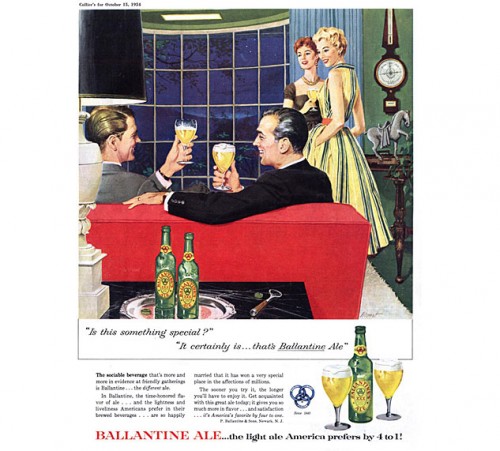 The this is this ad from 1954 is what interests me.  I see same-sex friendship. These are presumably two heterosexual married couples — though some would disagree — but the ad isn’t about love, marriage, or sex.  The ad is about the friendship that each spouse finds with their same-sex counterpart.  The two couples come together not for platonic cross-sex companionship, in other words, but same-sex friendship.

For much of American history, the idea that men and women could be friends made little sense.  This was not for the reason we tend to think this today (that is, sexual temptation), but because men and women were believed to be psychologically different.  Differences between the sexes were believed to make cross-sex friendship impossible and pointless.  You wouldn’t have anything in common and couldn’t understand one another.  Women needed men for marriage, domestic divisions of labor, and children — and vice versa — but true friendship was reserved for someone of the same sex.

We certainly don’t need to return to that type of thinking — even if it was adorable — but I do appreciate the way this ad is committed to the idea that simple friendship is fantastic.

I'm reminded of how in my youth (I'm now 71) my parents and their friends when they went out together were seated in the car. Men sat in the front and women in the back. This was true even when each of the women knew how to drive.

Actually, this scenario looks very similar to small get-togethers I attend, where there's just a few couples. The men hang out in the living room, dominating the conversation. The options for women are: participate in the men's conversation, usually by listening and sitting quietly by, perhaps occasionally interjecting a comment (try to make it a sound bite, nobody wants to listen to a woman natter on, eh?); have a quiet side conversation with another woman; retreat to the kitchen and talk among themselves.

The women in the ad are standing because they've just served the men drinks and they have to keep an eye on the hors d'oeuvres in the oven. When everyone's taken care of, they'll sit down for a while until drinks need replenishing.

IOW, I don't see same-sex friendship when I look at this ad. I see recurring patterns of dominance and the manifestation of privilege.

Women sat in the back so they could engage in serious discussion together! These get togethers are very dear to my memory. They were pleasant, enjoyable and without stress or expectation other than mutual enjoyment, the sharing of food, music and talk. How life has changed!

Oddly enough, I always had a hard time forming relationships with other girls growing up; I always spent time with the boys instead. To this day, I still have more male friends, but I'm learning to form close friendships with women as well.

Ads like these were aimed at a generation of men whose younger adult years were overwhelmingly shaped by war. The camaraderie among soldiers - and the unspeakable shared trauma of battle - was the defining feature of intimacy for a huge number of men in their target demographic. But postwar life was marked by a sense of competition between men, rather than camaraderie. This is surely no less true for women.

Notably, the ad epitomizes an ideal of middle-class privilege in accord with the values of the time without any trace of the competition or jostling for status that typically accompany it. The audience's surrogate - the man on the far left - has the undivided attention of both a powerful-looking man (whose relaxed body language suggests an absence of hierarchy) and two doting, attractive women (either of whom he could be paired with, depending on his favored hair color). I wouldn't say there aren't any sexual politics here, but they're of the Douglas Sirk variety, more apparent in the subtleties of composition than in the literal content.

And let's not forget, the product being advertised is not friendship, but alcohol. When we drink socially, we imagine ourselves being much more attractive and interesting than we really are, and the ad resonates with that delusion by making our faceless surrogate seem like the most fascinating person on earth to all these swanky people. The Cary Grant type on the right pals around with him like an equal (what man in 1954 wouldn't want Grant as his best mate?) and a pretty blonde and a pretty redhead both seem fully available for his pleasure (why jump to the conclusion that they're supposed to be wives?). Not a typical result of drinking cheap booze, but certainly the one you'd hope for. Regardless of postwar context, this side of alcohol advertising hasn't changed.

I'm seeing something different in this image, more on the lines of Andrew's and fork's take on it.

The men are seated comfortably centre stage looking at each other. The women stand in the background and look at the men.

I read this as saying that the attention of women is just one more good thing you get when you drink this beer, along with friendship, wealth, and comfort. Sadly, this reflects an attitude to women that was prevalent throughout my childhood.

I think everyone has interesting and valuable insights regarding this ad... However, this is all I can see: