Today in the U.S., one of the major rules of masculinity is that men must avoid physical intimacy with each other unless they want to have their sexuality called into question. The guy horrified by the potential implications of a casual physical touch is a common trope in our pop culture.

But this wasn’t always the case. For physical closeness and even casual expressions of intimacy to become threats to masculinity, homosexuality had to enter the public consciousness as a stigmatized identity. That is, a man being gay had to be a possibility in observers’ minds when interpreting their behavior, and men had to be eager to avoid any such assumptions.

Over at the Art of Manliness, Brett and Kate McKay have posted a fantastic collection of old photos showing men posing in ways that show a high level of comfort with physical contact between men. Many of them show men posed in ways that would be unacceptable among straight men today. Here are just a few; I highly recommend looking at their entire post: 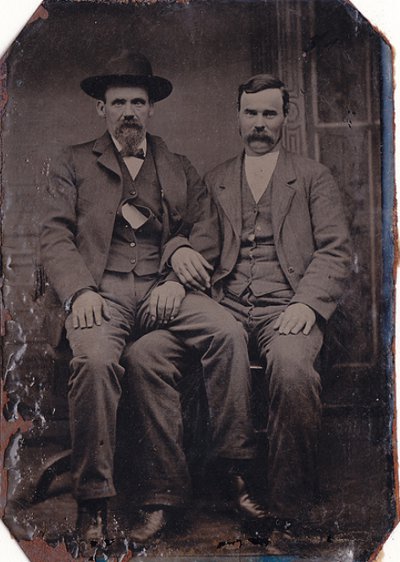 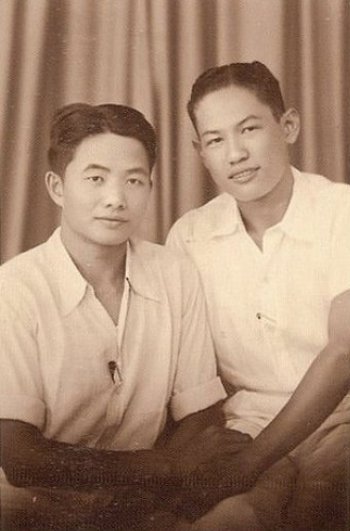 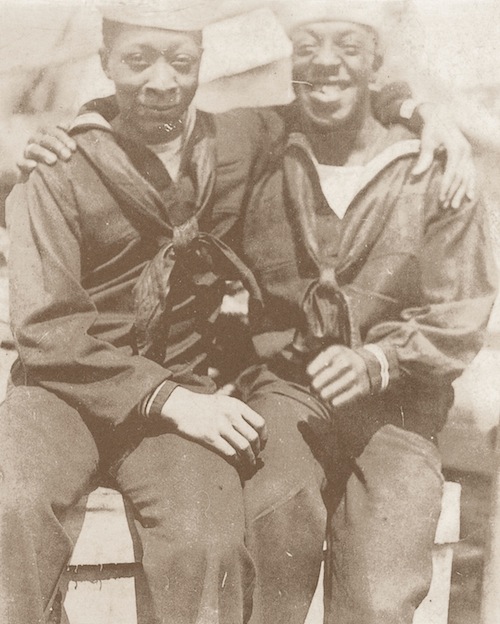 The McKays point out that sitting for a portrait required men to go to public businesses and openly pose for a photographer. These poses were quite common for men at the time and wouldn’t have been read through the lens of potential gayness that viewers today would likely apply.

Once personal cameras became popular, formal studio photos waned, but early snapshots showed similar poses. Though snapshots eliminated the need to go to a public place of business and pose, film still had to be developed by a professional, who would look at each image (and, even when I was a kid, developers would occasionally refuse to develop photos due to content, and occasionally you heard of a developer calling the police about photos they believed revealed illegal activities). The fact that physical touching is so common among men in early snapshots indicates that there was nothing scandalous or threatening bout such poses. Only as the performance of masculinity became increasingly focused on an obsessive avoidance of any perception of gayness or femininity did such touching become taboo.

Seriously, though — -check out their entire post. It’s awesome!

"Only as the performance of masculinity became increasingly focused on an obsessive avoidance of any perception of gayness or femininity did such touching become taboo."
Isn't it also probably likely that as gayness became uncloseted, the need to avoid the appearance of what was now visible to the wider society increased?

There needs to be SOME kind of social signaling as to the kind of interest one has in forming intimate relationships. If men don't want to be perceived as gay because they are not gay, what's the best way to do that?

In some other countries, the prohibition against male physical intimacy is lesser or non-existent.  I travelled to India and Thailand recently, and was taken aback by how many men displayed physical affection in public - holding hands, leaning against one another on the bus, etc.  I was surprised at the realization of how ingrained this prohibition was in my own mind.

Something that occurred to me:  in the US we don't have a problem with young women (think sorority girls) posing/behaving like this, but we would think it was odd for older women.  Any thoughts on why that is?

Times have changed for sure. That's why I'm always confused when I read "old" books and one man describes another in an affectionate way. I'm never sure if they want to imply something or if this was just normal...

Really interesting. I'm wondering, around what time did this start to change?

Great post as always! When I lived in China for a year, I often saw men of all ages walking down the street with their arms around each other, or arm in arm. As an American, I found it extremely charming to see two old dudes embracing as they walked along - old friends!
I also often saw women walking around holding hands or with arms around the other's shoulders.

It's worth mentioning, as the contextual backdrop of these photos are invisible to us, that some of these photos might depict brothers, but either way it's a welcome visual slice of history.

My own US born and raised brothers would never think of touching each other the way my husband and his brother do.

These photos are beautiful! It makes me sad to see how we've lost this over misguided hatred.

As an upper-elementary teacher, I've often seen the boys in my class move between buildings/lessons in one amoeba-like mass, constantly in contact with each other. I wonder at what age this affection is unlearned, or discouraged, too.

A few years ago, I was at a local classic movie theater (in Oakland, California) which shows newsreels along with the main feature. That night, the newsreel was from the first Gemini mission, in which two astronauts went into space together.

When the astronauts were interviewed after splashdown and being brought back to land, they were in their pajamas (!) sitting together on a couch, one with his arm comfortably around the other.

This story is from my lifetime, and it still seemed so out of keeping with what I've come to expect.

While I think your main point about the increasing taboo on demonstrations of affection between men in the West is important and basically true, I'm a little troubled by the assumption that all the men in these pictures are straight and that none of the pictures might in fact depict lovers. We don't and can't know that. There are surviving pictures from this era that portray clearly romantic/erotic intimacy; there's also male/male photographic porn that survives at least from the late Victorian or Edwardian eras. So, clearly, some photographers in the period were willing to make images that *did* violate the taboos of their own time, that *did* demonstrate unambiguous male/male sexuality. We can't a priori assume that just because a picture was taken by a professional photographer, the men in it therefore are only showing culturally-normative levels of intimacy. Even less can we assume such a thing about amateur snapshots, especially since it was not unheard-of for people to develop their own photos. While I'm all for paying proper historical attention to changing standards, I think some caution against inadvertently erasing queer people from history is necessary too.

Thankfully in India, men can still hold hands, sit and even have their photos clicked in the same manner today.

This reminds me of when I was in a Medieval literature class, and we were reading Arthurian legends. The men (knights) were constantly fainting due to high emotions in these stories.  Apparently, it was considered hyper-manly at the time to feel emotions so strongly that you would fall right over!  The women, on the other hand, never fainted.

It's funny how changing ideas about what is acceptable show up.

I know this is an old post so I'm behind on the comments, but just an addition to the comment discussion-

I've noticed that since I married and swiftly had a child, my family members (including adults) hug me more, however even close non-family friends hug me much less. This is true for both males and females I'm close to (side note- I'm not sure if my Bisexuality and the fact that many of my friends are also bi plays any part in that, but it might be worth noting).
It seems that as an unmarried woman (even in a committed relationship) close platonic physical contact with friends was the norm, but being married and being a "mom" made me less huggable to friends. Friends are also less likely to pat my shoulder or arm, let alone lean on me during a movie. At the same time, both my family and my husband's family hug me much closer and more casually/frequently now that I've achieved "mommy status"- they're also more likely to touch my arm or back when we talk.
I'm not sure why all of this is, but it's something I've observed and I'm curious about it.

Men who aren't gay can sometimes still express a sense of camaraderie in public.
I captured one example in this photograph: http://flic.kr/p/8RRzJi

I read this in another way and would focus on the advent of heterosexuality, understanding that both hetero- and homosexuality are identities rather than acts. Certainly the acts of sex has been around for slightly more than a year, and these acts may have been enacted with any person (recognising that 'male' and 'female' are ends of a spectrum and not exclusive to human manifestation) but the concept of being hetero- or homosexual is a relatively new thing. The construction of any identity is best accomplished through an understanding of what is not contained within the centre. Homosexuality and all things feminine are only interesting to the degree that they delineate that which is masculine/normal/the centre. I would suggest that the rise of homosexuality is not the rise of a new sexual identity but the rise of misogyny as a cultural norm.

[...] suggest that America was not always so guarded about male affection in the context of friendship, Male Affection in Vintage Photos Over at the Art of Manliness, Brett and Kate McKay have posted a fantastic collection of old photos [...]

2 years backpacking remote villages and towns across India, I found male affection in public far beyond what would be considered acceptable in the USA or even mediterranean. Here are photos of my experience there: http://jpgmag.com/stories/19265

[…] that here, too, but homophobia and general isolation have reduced common touch to a rarity. Look at these pictures. The intimacy of these pals is heartwarming. Let’s spread a little of that around here… […]

[…] to be fair, we can put the same questions to some women’s media: do the men involved have relationships with other guys, or is this mostly about competing for and flattering the […]