Last year Lynne Grumet set the internet a-flutter when she appeared on the cover of TIME magazine breastfeeding her toddler. Reactions were largely negative, often reflecting unease at the open display of a sexualized body part being used to feed a child older than the age we generally find acceptable. Others objected to what they saw as the sensationalism of the photo. Grumet later posed on the cover of another magazine in a pose that focused on bonding and intimacy, commonly cited as benefits by breastfeeding advocates. The entire episode tapped into larger cultural anxieties about appropriate mothering.

And as Jill Lepore explains in The Mansion of Happiness, it’s just the latest round in the changing discourse about breastfeeding; in the mid-1800s, images of breastfeeding mothers became a fad in the U.S. The use of wet nurses had never been as common in the U.S. as in Europe, and it became even less popular by the early 1800s; breastfeeding your own child became a central measure of your worth as a mother.  Cultural constructions of femininity became highly centered on motherhood and the special bond between a mother and her children in the Victorian era.

As daguerreotypes became available, women began to pose breastfeeding their infants, capturing them in this most essential of maternal roles: 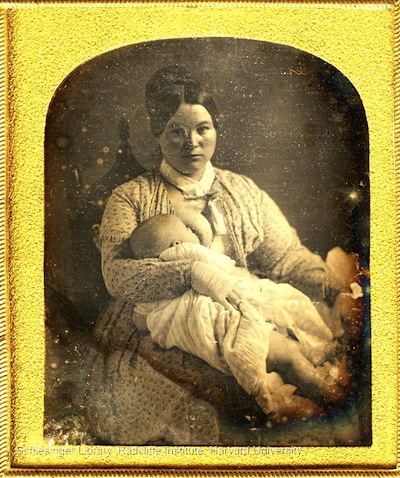 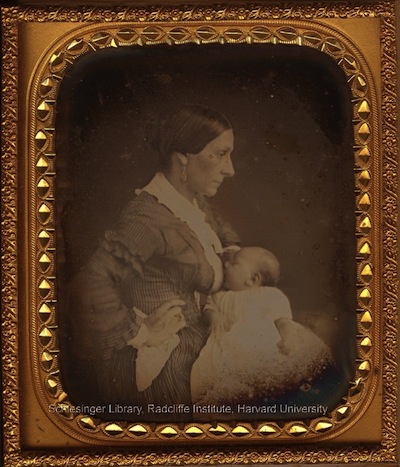 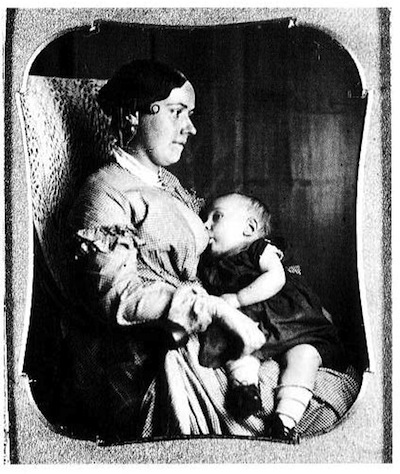 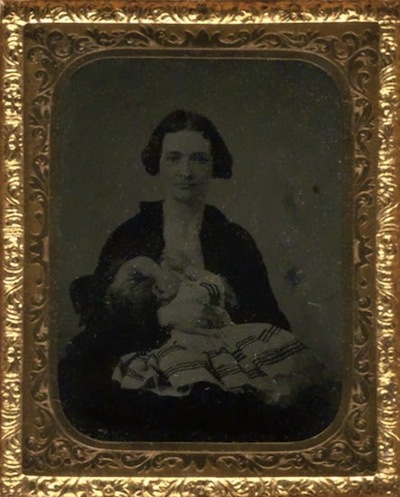 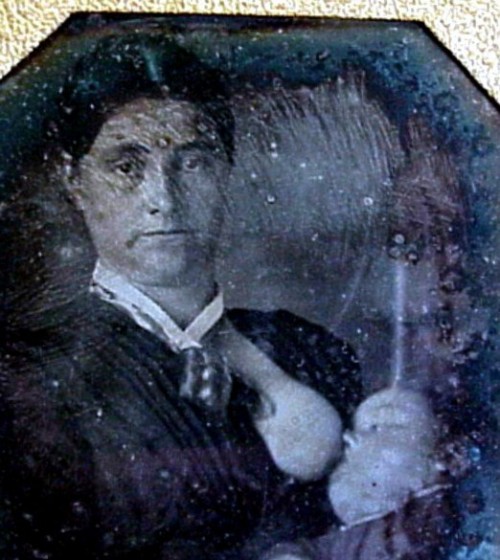 Cosetra has created a Pinterest board of vintage photos and paintings of breastfeeding that has more examples.

Within decades, American women suddenly seemed to lose the ability to adequately feed their babies, just as infant formula hit the market. Doctors continued to push breastfeeding, but cultural perceptions changed, and with them the social construction of femininity. Rather than being a symbol of maternalism, breastfeeding seemed incompatible with femininity — or, specifically, with white upper-class femininity. Breastfeeding didn’t mesh well with ideas of delicate, refined white women; it was too animal-like, too uncivilized. As Lepore relates, by the early 1900s, a study in Boston found that 9 out of 10 poor mothers breastfed, but only 17% of wealthy mothers did.

By the 1950s, only 20% of mothers nursed their children. Then, ideas about motherhood changed once again; suddenly comparatively privileged, white women were drawn to movements that advocated breastfeeding. Formula came under increased scrutiny. And so continued the ongoing cultural debate over breastfeeding, motherhood, and proper femininity.


Gwen Sharp is an associate professor of sociology at Nevada State College. You can follow her on Twitter at @gwensharpnv.

Purely by my own observation, this seems to have gone in reverse now. I wonder what the data would show - do rich women breastfeed at a higher rate than poor women?

This is great. Thanks for sharing!

I still shake my head at the hypocrisy of people being offended by seeing a breast performing its natural function of feeding a child whilst having no problem with seeing tramps shaking their naked breasts in the faces of drunken businessmen for tips during the lunch hour at topless bars. Please!

The iconography is waaaay older than the XIXth century: you have nursing Madonnas and if you go further back in time, Isis nursing her child Horus/ Harpocrates.

[...] Victorian fad alert: breastfeeding photos for you and your friends! [...]

I wonder whether all of the photos are actually of the mothers. Could some of them be the wet nurses?

It's not "Lynne" Grumet, it's Jamie Grumet.

[...] out this post from the Sociological Images blog, and the link to the inspiring Pinterest board from Corsetra of vintage photos and paintings [...]

I recently read Empire of the Summer Moon - a super engaging book about the rise and fall of the Comanche empire. The book centers around one of their greatest leaders, Quanah Parker, half-white son of a Comanche captive, Cynthia Anne Parker--- anyway, Cynthia Anne is eventually separated from her family and re-captured, along with her daughter, Prairie Flower. One of the only existing photographs of her is of her nursing her daughter. The author notes that b/c she spent most of her life with the Comanche, the shot of her nursing her daughter is akin to the shots in National Geographic years later- almost "animalizing" her by presenting her in a way that white women would never be photographed, ie, breastfeeding.

In light of this article, though, i am now re-thinking the authors assessment.

(Of course, Cynthia Anne was also forced to become an oddity- a white woman raised by the comanches!- and forced to be gaped at bu curious white folk- so the author could also be right stil)

Anyway, I HIGHLY recommend the book as well!

Could this also have been about wanting to get pictures of the babies, and having them nurse during the process being the best way of keeping them still for it?

[...] Victorians were more progressive about breastfeeding than we are! Although, it was linked to femininity, class and bonding with the child, stigmas that still exist around breastfeeding (or NOT breastfeeding) today. [Sociological Images] [...]

[...] A fascinating discussion of mid-19th century women who used their opportunity to pose for daguerreotypes and the first photograp... [...]

[...] Did you know that in the Victorian Era it was fashionable among the wealthy to get breastfeeding portraits? [...]

[...] article by Gwen Sharp, an Assistant Professor of Sociology at Nevada State College, on The Society Pages explains how images of breastfeeding women became a fad at the [...]

In the nineteenth century parents often had photographs taken post-mortem. You images show mothers breast feeding their deceased children. There is a contrast in skin tones, vacant gaze in the infant's eyes, or sometimes a hidden face. I do not know if they were intended for public viewing. Perhaps the images indicate how important the intimacy of breast feeding was to the parents. Laura Jones

[...] colleague recently sent me this link to Gwen Sharp’s article about “The Victorian Breastfeeding Photo Fad,” a fascinating fad to [...]

Required Reading before Interacting with my Daughter (just kidding) | Marigolds for Mimi — December 9, 2013

[…] As daguerreotypes became available, women began to pose breastfeeding their infants, capturing them in this most essential of maternal roles. [Rest.] […]

[…] enough, one hundred and odd years ago, in the Victorian era, breastfeeding (before ‘formula’ milk) was commonplace…everywhere! Even the English […]

[…] enough, one hundred and odd years ago, in the Victorian era, breastfeeding (before ‘formula’ milk) was commonplace…everywhere! Even the English […]

[…] to Gwen Sharp, in the nineteenth century, “breastfeeding your own child became a central measure of your […]