Everyone Lotion for Everyone, and Men Too

We’ve highlighted the ways in which society portrays men as people and women as women many times over.  So many times, in fact, that we started a Pinterest collection.  There are two scenarios in which men are the default person: (1) masculine spaces, like the workplace and politics, and (2) neutral spaces that aren’t associated with men or women, like museums and the internet.

When something is distinctly feminized, however, things flip.  @jessimckenzi and @freedenoeur forwarded us a pointed example: a brand of lotion called “everyone.”  Everyone lotion comes in two types: everyone lotion “for everyone and every body” and everyone lotion for men: 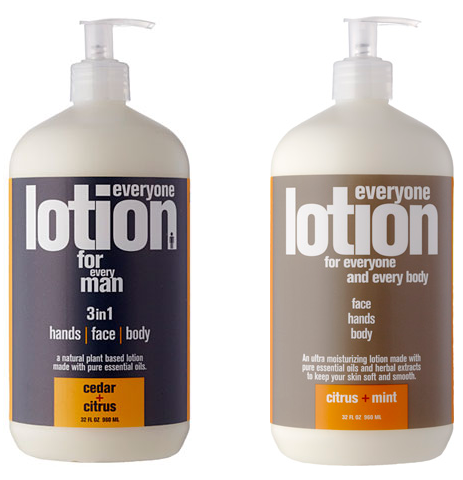 This practice reminds us who belongs where by making one gender or the other the neutral participant and then adding a modifier in order to selectively include the other sex. Another example of this phenomenon is the masculinizing of feminine products in order to sell them to men and the feminizing of masculine products to sell them to women. Together these practices affirm and naturalize gender-based segregation in our social spaces and activities.

Aside from the weirdness of having a "default" product and a "male" product, this is also an interesting example of how we connect gender with fragrances, and how variable that is across cultures and eras.

Citrus and mint are apparently gender-neutral now, so that lotion is for everyone now. But I can remember a time when fruity fragrances were marked as feminine (remember Strawberry Shampoo?) and "citrus" was more on the turf of household cleaners. I guess years of body products being marketed to sound edible have changed that.

Cedar, in this case, is the element that distinguishes the other lotion as male, tying into the more established association between woodsy scents and masculinity. But back when we wore more wool and feared the ravages of moths, cedar was the smell of sweaters that have been sitting in a closet all year - not quite the aroma of a manly man on the prowl.

I'm not sure to what extent our gendering of smells is purely an accident of culture, but as far as I know, perfumes were not categorically gendered in the West until the 19th Century.

Another curious thing is how the Manly Man Lotion is for the "hands face body" (in that order) while the neutral one is "face hands body."How nice of them to tell us where to put it; apparently men care more about their hands than everyone else. The neutral lotion also has some extra text about making skin soft and smooth, although there's no indication that the men's product should have the opposite effect.

Actually, considering that I've only seen female-targeted products marketed with and expression like "soft and smooth," the neutral campaign doesn't seem so neutral at all.

Marketing and sales talk is created to do one thing: sell. In this case, it's to sell a me-too commodity product that faces dozens of competitors. The rhetoric used either succeeds or fails, but the continued emphasis on gender differentiation in selling consumer products indicates that it often works.

So marketers do this because it works. They couldn't care less if their ad copy "affirms" or rejects any cultural norms. The real question of interest therefore is why does it work? Why do products sold on various stereotypes of gender differentiation sell so well in the open market?

Pointing the finger at companies that market this way misses the mark.