Re-posted in honor of Grandparents’ Day.

My Christmas present to my mom one year was time off from childcare. For several days while I was back home, I took over all of her usual duties regarding her grandkids; as she tries to support two daughters who are divorced with kids and struggling to get by, taking care of grandkids had expanded to take up most of her non-working life. She was incredibly excited to have the free time to finally go to the dentist and do other basic errands for herself.

MetLife and Generations United just released the results of a study of grandparents’ contributions to the support and care of their grandkids. It illustrates how grandparents serve as a support system, providing both childcare and financial assistance.

The data come from a national sample of 1,008 grandparents over age 45. A caution: the survey was conducted online, though they say the sample was weighted to be representative of the full population, not just the online population.

On average, grandparents have 4 grandkids: 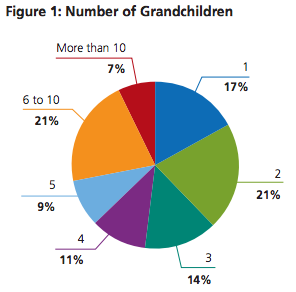 Thirteen percent of the sample reported caring for their grandchildren on a regular basis. Of those, a third watch the grandkids at least 5 days per week, while over 40% babysit less often, and 15% are raising their grandchildren: 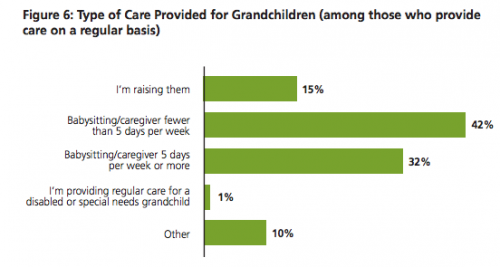 Most grandparents reported that one of the reasons they watch their grandchildren is because they enjoy it, but their answers also make clear that grandparents are playing a key role in filling the gap in care during periods when parents are at work but kids aren’t in school: 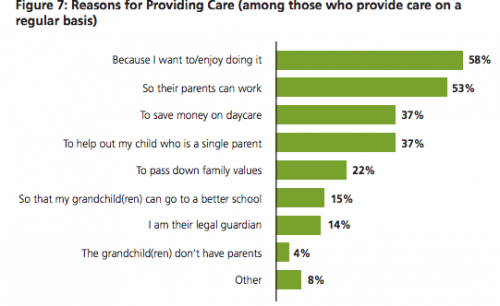 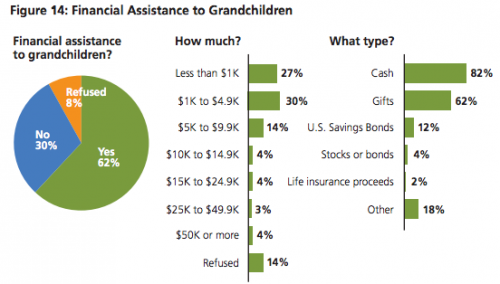 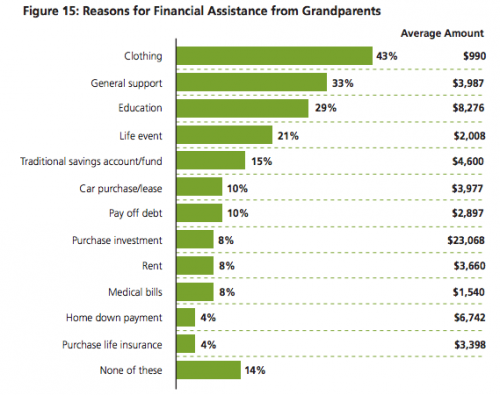 A third (34%) said they continue to provide financial assistance even though they think it’s going to cause problems for their own financial futures.

For another aspect of the essential support grandparents provide, check out Philip Cohen’s earlier post on poverty and the number of kids living with their grandparents.

I'm torn between thinking this reflects the 21st century version of the historical extended family, or are we seeing an extension of childcare to grandparents because more women of childbearing age have joined the workforce since the 1960's?

Grandparents are a biological advantage.

Children who have close relationships with their grandparents don't realize how incredibly lucky they are.

Many people whose grandparents passed away before they were even born will never know what it feels like to have grandparents.

In my case, both sets of grandparents did not want to have anything to do with me or my siblings. I know it was hard for my parents because sometimes they needed a little extra help raising my siblings and I, but the help just wasn't there.

It was hard for us kids too, because we did not completely understand why our own grandparents did not care about us. Even to this day I really don't understand.

GRANDPARENTS AS SUPPORT SYSTEM « Welcome to the Doctor's Office — September 7, 2012

"Grandparents also serve as a form of economic safety net."As the Boomer generation passes away, I expect this will be the case much more rarely. Those persons who are young adults now will be, on average, unlikely to have nearly as much money/resources to spare in their later years, given the prevalence of overwhelming student loan debts and unemployment/underemployment/non-unionized employment that they are now enduring well into their midlife stages.

"the survey was conducted online, though they say the sample
was weighted to be representative of the full population, not just the
online population."

How do you weight a sample to represent a group different from the one you sampled?

I feel very sorry for my parents because my sister, at far too young an age and far too low a responsibility level, has made them grandparents. My mother never even got to enjoy her empty nest and the financial and emotional and health benefits that came with it, before she got roped into taking care of my sister and her baby.

I do resent the hardship that my sister's chronic irresponsiblity has, does, and will continue to cause our parents.

So far, our mother says that she will only babysit when it's conveneint for herself to do so, and charges a small fee for the service. In reality, however, I know my mother has trouble saying "no" to even the most ridiculous of demands. Hopefully, my parents will stop giving my sister money and will make her reapay what she owes for what they've already given. All her life she's had other people solve her problems and shoulder her burdens for her with little or no effort on her part. This needs to stop for her to learn to stand on her own two feet.

I was very fortunate to have my grandparents growing up. After my mom divorced my Dad, Dad and I lived with my maternal grandmother (Dad's mother-in-law), who watched me while Dad worked two jobs. When I was 4, we moved to Ohio, where my paternal grandparents (especially my grandma!) raised me with my dad for the next 5 years. They also were key in helping my dad get full custody of me. Did you know that even if though my father had been the primary caregiver and financial support for a child for THREE YEARS when I 6, the state was going to give full custody to my mother because she suddenly wanted to raise me again?! My maternal grandmother and my paternal grandparents all vouched for my Dad in court and he got full custody and mom got me 6 weeks in the summer and every other birthday and Christmas (she lived 700+ miles away, otherwise I probably would have seen her on the weekends). So yeah, I love my mom, but I am VERY grateful for my grandparents and everything they did for me growing up.

I am so thankful to both sets of my kids' grandparents. My husband and I get to go on date nights once a week, and I also get much needed solo kid-free time. I would never want to be one of those people who move across the country from their parents and never get time to themselves.

Though if your parents drive you up the wall, I could understand wanting to have a few states distance between you and them.